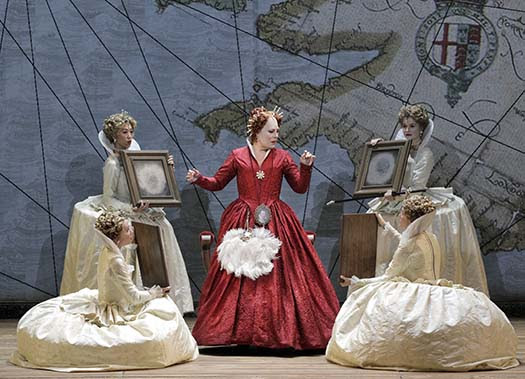 The San Francisco Opera is presenting Roberto Devereux., Donizetti's 1837 Italian opera about the elderly Queen Elizabeth I and her ill-fated romance with the young Earl of Essex who she had executed for treason in 1601, two years before her own death in 1603. It's a tricky opera to pull off, partly because the four major roles are so difficult to sing, and partly because the narrative conventions of early 19th century bel canto opera tend to look absurd in the 21st century. It's a pleasure to report that this production is a major success, anchored by a bravura performance from soprano Sondra Radvanovsky as Elizabetta in an intelligent staging by director Stephen Lawless which has been seen in Dallas and Toronto over the last decade. (All production photos are by Cory Weaver.) 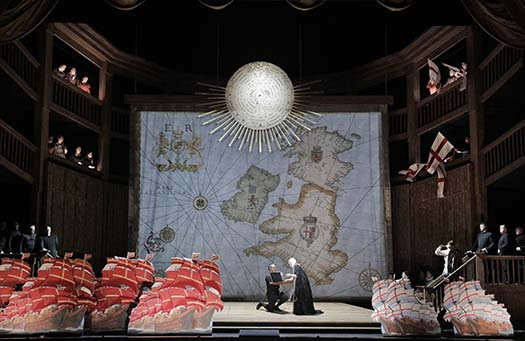 The long overture, which contains an anachronistic snippet of God Save The Queen, is used as a soundtrack for a series of tableaux illustrating who Elizabeth I was in history for those who hadn't seen Bette Davis or Cate Blanchett in the movies or Glenda Jackson on television in Elizabeth R, culminating in the amusing representation above of the ill-fated Spanish Armada. 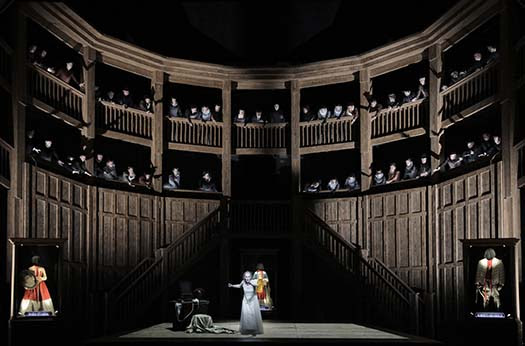 The real triumph of the production was musical, with propulsive conducting by Riccardo Frizza and another fine outing by the SF Opera Chorus who are used rather like a tragic Greek chorus providing sideline commentary for the principals' drama. There were also a pair of fine supporting performances by tenors Amitai Pati and Christian Pursell as Roberto's antagonists, Lord Cecil and Sir Walter Raleigh. 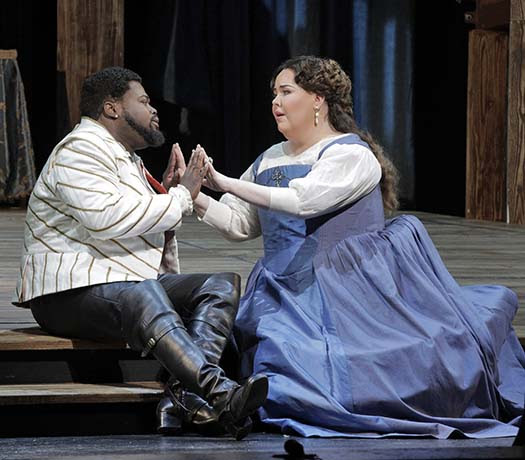 The narrative invents a thwarted love affair between Roberto Devereax, Earl of Essex and Sara, Duchess of Nottingham, to ignite the jealousy and vengeance machinery of the plot, and tenor Russell Thomas as Roberto and mezzo-soprano Jamie Barton as Sara have such extraordinarily creamy, gorgeous voices that you wanted them to run away together for a happy ending. 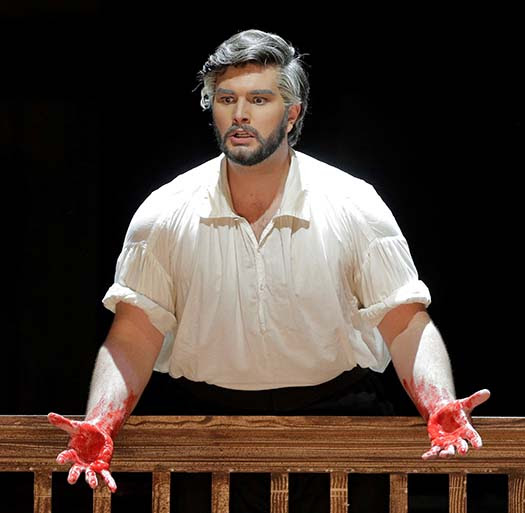 Baritone Andrew Manea, an Adler fellow in the Opera's training program, was rushed into the major role of the Duke of Nottingham at the last minute when the originally cast performer had to cancel after an accident. As the faithful friend of Roberto, and eventual jealous husband of Sara, he managed a respectable performance but wasn't at the same superstar level as the other three members of the love quadrangle. 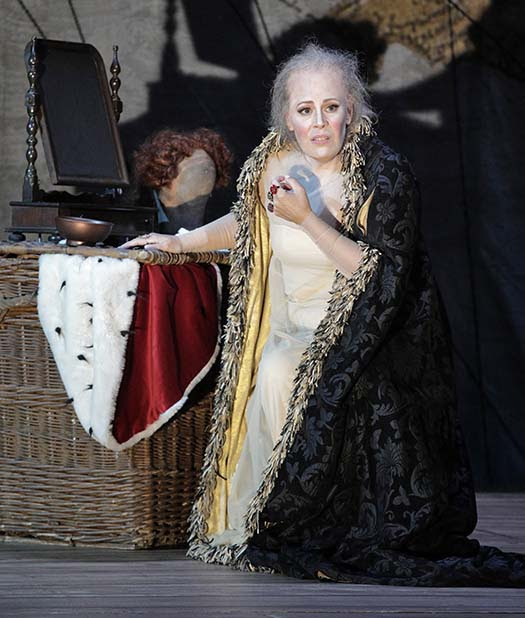 The final scene of the opera is a long tour-de-force for Radvanovsky who has to act and sing through just about every major emotion imaginable, from vengeful to pleading to sorrowful, and she aces all of them. Reading on the internet from opera addicts who have seen her in previous renditions of this role at the Met and at the Canadian Opera, the verdict seems to be that she has outdone herself in this San Francisco outing. 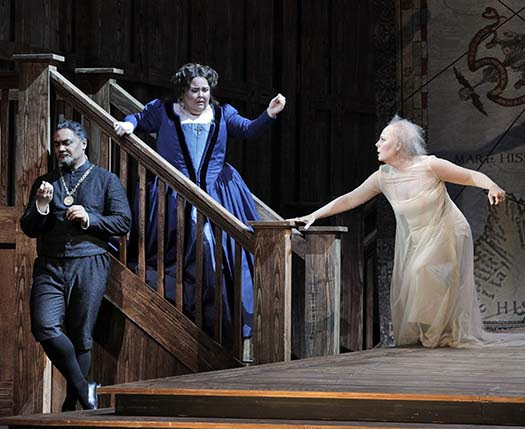 I was distracted at Saturday's opening performance last Saturday, so returned for the second performance on Tuesday evening in balcony standing room with OperaVision screens, a perfect mixture of close-up sight and enveloping sound. Most people are scared away from opera by the high ticket prices, but that standing room ticket cost $10, which is easily the best deal in all of San Francisco. A great orchestra, some of the best singers in the world, and a beautiful opera house with world-class productions at that price is a genuine rarity, and I would encourage everyone to take advantage of it this fall. There are four more performances on Friday, September 14, on Tuesday, September 18, a matinee on Sunday, September 23, and a final outing on Thursday, September 27. Those last two performances also feature OperaVision in the balcony and all true local opera lovers will probably be there. (Click here for tickets.)
Posted by Civic Center at 5:06 PM