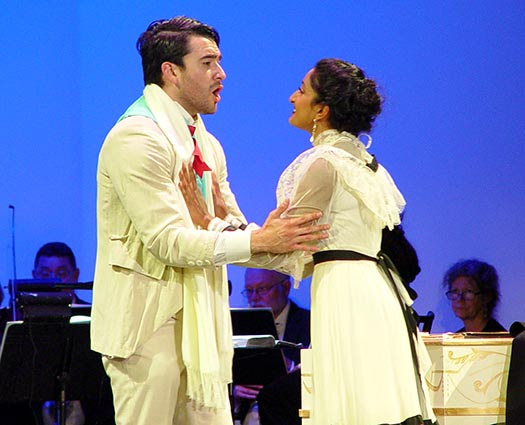 I saw the final performance of Rossini's The Barber of Sevllle at the Legion of Honor last Sunday, and it was the first time I've ever enjoyed the opera. The production featured a witty, singable English translation by Donald Pippin, some judicious cuts to a long comedy, and an ensemble cast that obviously loved playing with each other. Also for the first time ever, I actually cared about the romantic fate of the young lovers Rosina and Almaviva thanks to the charming performances of soprano Maya Kherani and tenor Sergio González above. 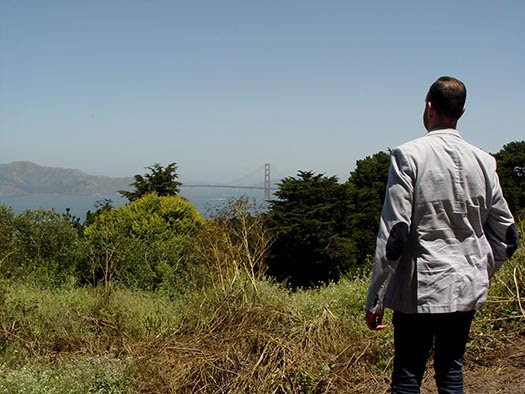 The opera was presented by San Francisco's Pocket Opera in conjunction with Petaluma's Cinnabar Theater, and the Sunday matinee was the final installment of a 12-performance tour of Sonoma and the Bay Area. 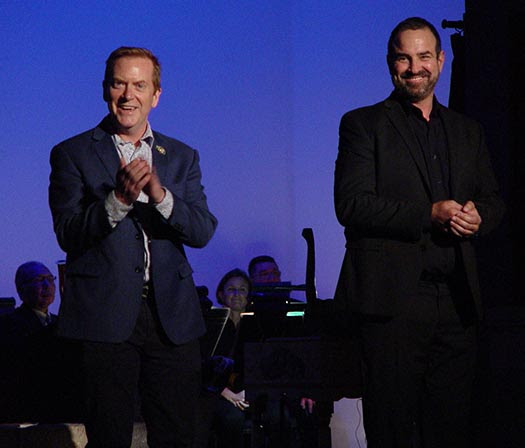 Donald Pippin, who attended the performance, was a musical polymath who emigrated from the East Coast to San Francisco in the 1950s and started a chamber music series in North Beach that eventually branched into operas with translations by Pippin himself. Pocket Opera has been around since the 1970s after audiences put together a company for Pippin, with a mission to prosleytize for the art of opera by presenting them in English before the advent of supertitles. Pippin is now in his nineties and Nicolas A. Garcia (above right) has taken over the reins as Artistic Director with the SF Symphony's Jeffrey Jordan as the company's new Executive Director. 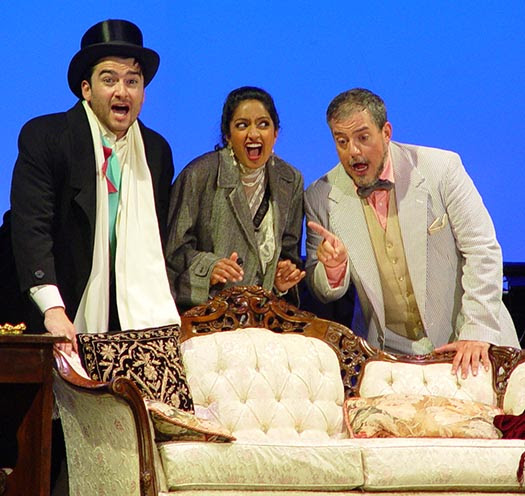 The principal singers varied in musical quality, but they were all expert actors who mostly underplayed the usual comic schtick which characterizes most productions of this opera, and some of their scenes were genuinely funny. Tenor Sergio González was off-pitch and off-beat from the 10-person orchestra in his first scene, but he recovered nicely. Soprano Maya Kherani played Rosina as an anachronistic 21st century girl who isn't ruffled by much and has a few cards up her sleeves. Her singing was lovely, especially the crystalline trills that were amazing in an how-can-she-do-that way. Baritone Igor Vieira was one of the sweeter Barbers I have seen and sang the English translation with wit, precision, and a nice tone. Like everyone else in the cast, he didn't oversing in the small theater, which was heavenly. 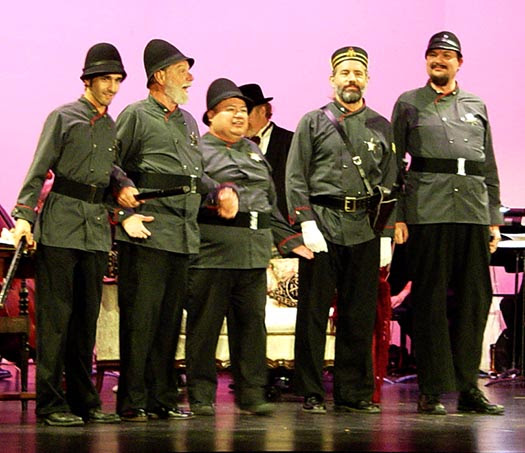 The ensemble playing street musicians and Keystone Cops were a delight, musically together and physically so differentiated that their appearance was funny without their having to do much more than walk around in circles. Above, left to right, is Dennis Carrillo, Brian Drury, Jose Hernandez, Steve Kahn and J.T. Williams. 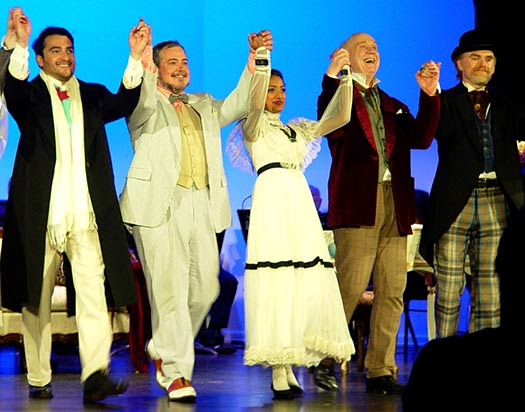 The lecherous old characters of Don Bartolo and Don Basilio are often big bores, but Lee Strawn as Bartolo and Jason Sarten as Basilio gave interesting performances which almost made them sympathetic. Their mastery of patter singing the English translation, particularly by Strawn, was worthy of Gilbert & Sullivan. The orchestra was conducted by Mary Chun from the contemporary music group Earplay, and it was a treat hearing her conduct one of Rossini's best scores. The job was particularly tricky in this case because the orchestra was at the back of the stage and the singers couldn't see her much of the time. The orchestra itself sounded scrawny at times and like a full 50-piece ensemble at other moments. During the full-voice finales of the two acts, the sound was enormously rich. There is an alchemy to any successful theatrical production, and it was obvious this group had stumbled across some of that magic.
Posted by Civic Center at 4:31 PM 1 comment: 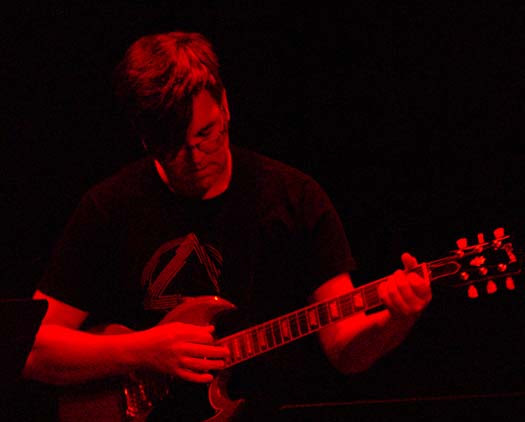 Two Fridays ago I crawled down to the Tenderloin after work, had a falafel on the sidewalk on Market Street, and then arrived late for an album release concert and party by Brent Miller (above) at the Center for New Music on Taylor Street. 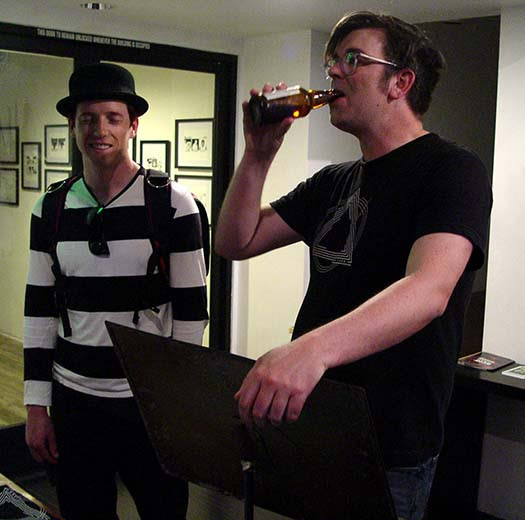 Many of San Francisco's arts non-profits are ossified and administration-heavy, with the fostering of art and artists a secondary concern, so it's always refreshing to step into the Center for New Music which is the ideal opposite. 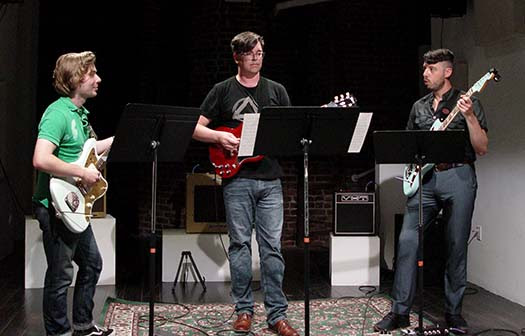 The Center opened in 2012 on a wing and a prayer as an artists' collaborative, and it's been extraordinarily successful in its aims. Instead of being a curated space where there are gatekeepers, anyone can become a member for $100 and then put on a show where the performers receive !00% of the box office. In other words, you can even learn how to make money off of your art. 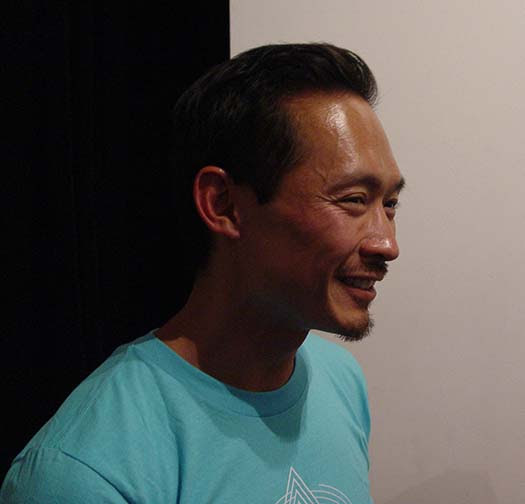 The two founders of the Center for New Music were two college buddies, Brent Miller and Adam Fong (above). Adam has moved on to the Packard Foundation in Silicon Valley and they are lucky to have him, while Brent continues on as the director of the Center. 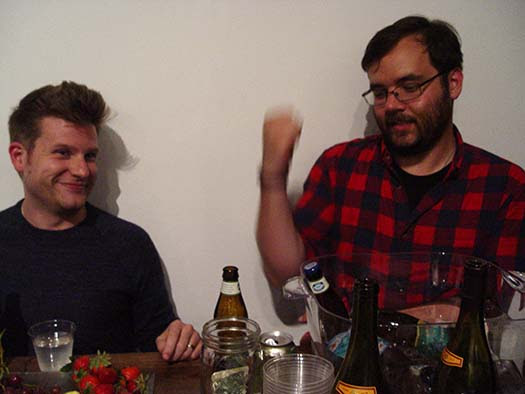 The small space has put on hundreds of concerts over its last seven years, some of which are legendary, but that's not the point of the place. Its true value has been as a social space where musicians of all generations and levels of success can meet and collaborate. 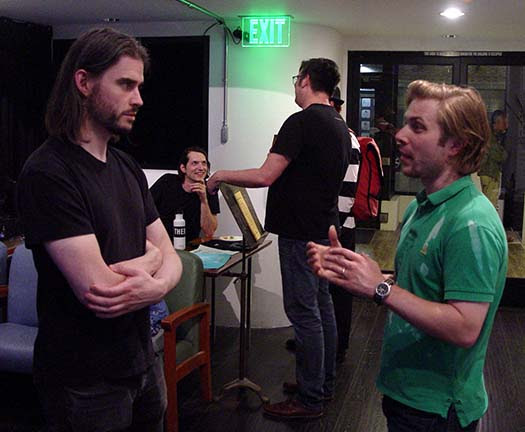 Nomad Vigil, Brent Miller's "album," that major concept which has become anachronistic in our own short lives, can be found at this link.
Posted by Civic Center at 9:28 PM No comments: 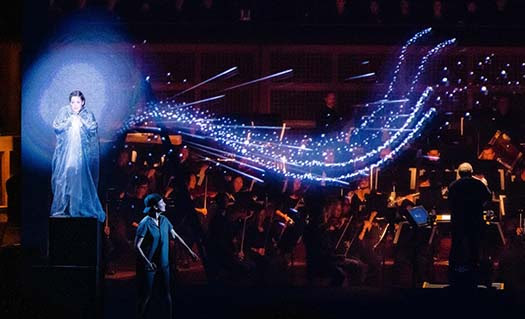 Before the mists of time and memory take over, I need to write a shout-out for the SF Symphony's final program of their 2018-19 season, a stupendously inventive production from the Opéra National de Lyon of Ravel's 1925 one-act opera, L'enfant et les sortilèges. (All production photos are by Brandon Patoc.)

The portents were not good for this concert. Britten's one-act Noye's Fludde was to have occupied the first half of the program but was canceled months ago. The original conductor was to have been Music Director Michael Tilson Thomas, but he had to cancel because of heart surgery. The happy surprise was that the concert was about perfect, with the first half proceeding like we were at the SoundBox nightclub, consisting of snippets of chamber music from Debussy, Faure, and Ravel. 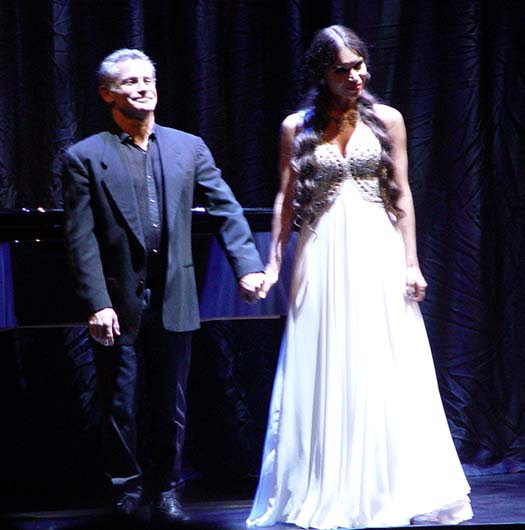 None of it seemed very consequential, other than mezzo-soprano Ginger Costa-Jackson singing an uncharacteristically savage "Christmas carol for homeless children" [in World War I] by Debussy, but the short pieces set the mood for the major production ahead. 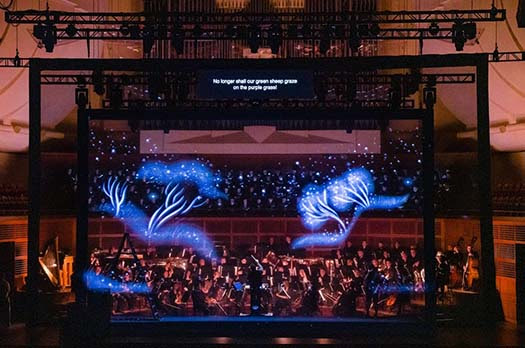 The SF Symphony has featured great projection design from Adam Larsen over the last decade, principally at its SoundBox concerts, but the animated projections by Grégoire Pont on two scrims in front of the orchestra were an astonishing advance. Singers would throw out their arms and jagged lines of light seemingly shot out from their bodies in animated doodles. "How the heck did they do that?" was my repeated, jaw-dropping response. 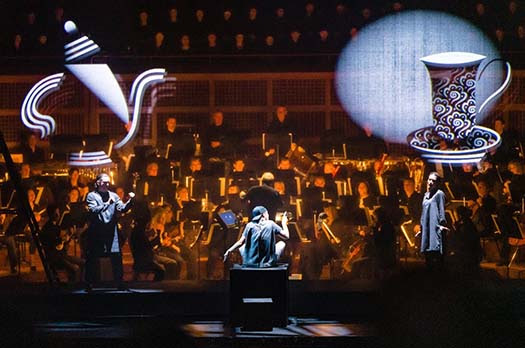 The libretto was written quickly by the French novelist Colette during World War I and it concerns a little boy who throws a destructive tantrum after his mother punishes him for his bad behavior. He destroys a grandfather clock, tears up wallpaper, breaks china, and mangles furniture. Then the sortilèges (magic spells) in the title begin and the suffering inanimate objects and animate animals who the boy has hurt commence their laments and revenge. 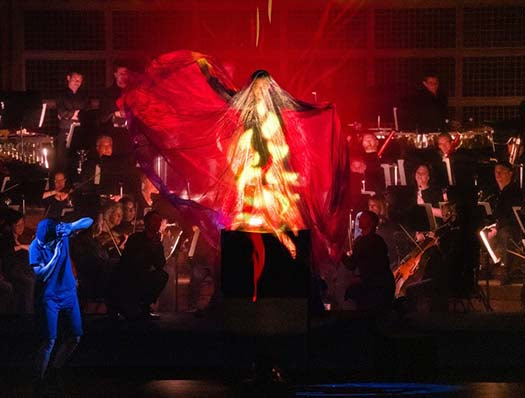 My friend Janos refers to the current U.S. President as The Malignant Toddler, and it was a special pleasure watching this bullying brat being threatened and frightened by Fire, among others. The opera is usually considered a charming, nostalgic look at childhood, but the present political circumstances made me want to see the child sequestered away from everyone and everything, forever. 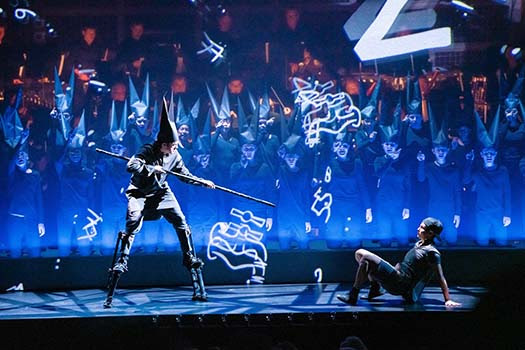 The rich, sumptuous, picturesque musical score was new to me, and instantly became my favorite Ravel. The orchestra under the original conductor of the Lyon production, Martyn Brabbins, was exquisite to hear and so were the huge forces marshaled for the singing cast, including the SF Symphony chorus, the Young Women's Chorus of San Francisco, and the San Francisco Boys Chorus. 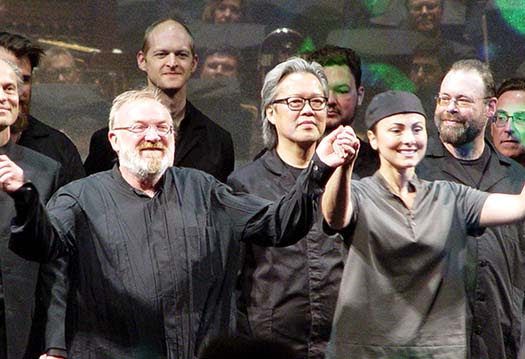 Mezzo-soprano Isabel Leonard (above right, holding conductor Brabbins' hand) was her usual fabulous self in both the vocal and acting departments, and almost made me care about the spoiled brat. 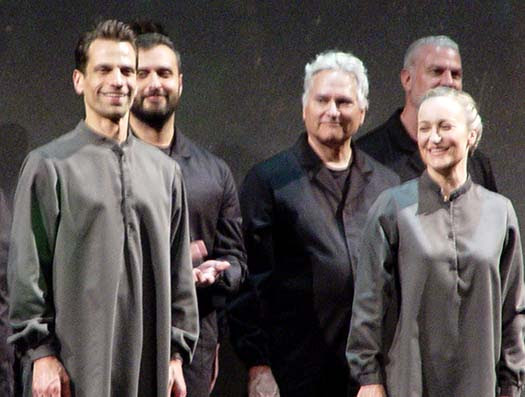 Anna Christy, Nikki Einfeld, Marnie Breckenridge, Ginger Costa-Jackson, Jennifer Johnson Cano, Ben Jones, Kelly Markgraf, and Michael Todd Simpson were unusually strong in their many roles from a Teapot to a Screech-Owl, and there wasn't a single weak link. Congratulations to everyone on pulling off a complex piece with such flair.
Posted by Civic Center at 2:33 PM No comments: