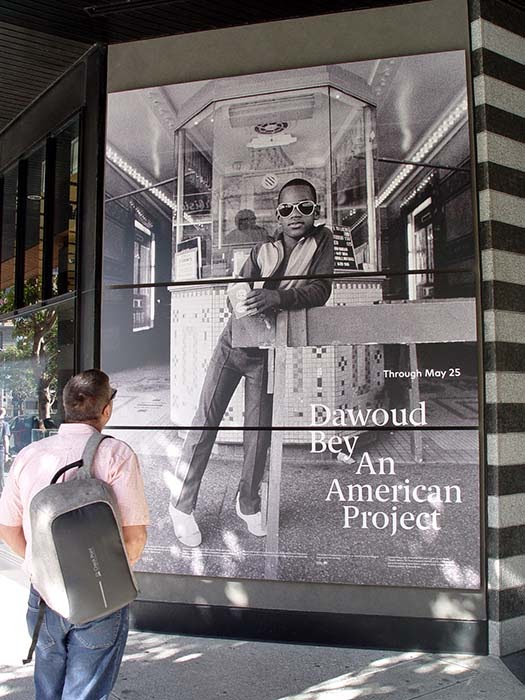 Dawoud Bey, a 66-year-old black photographer from New York who I had never heard of before, is having a retrospective at SFMOMA right now, and it's wonderful in all kinds of ways. 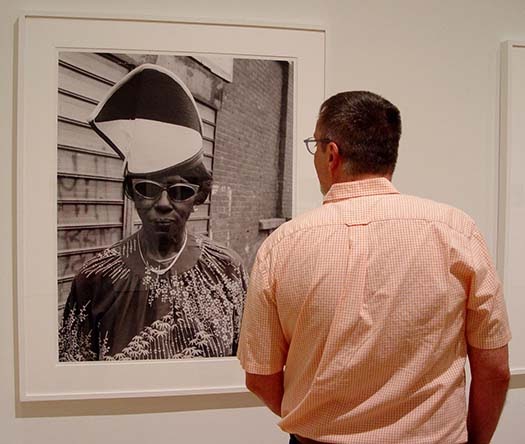 His first photo series, Harlem, U.S.A., were human portraits of his own neighborhood in the 1970s. 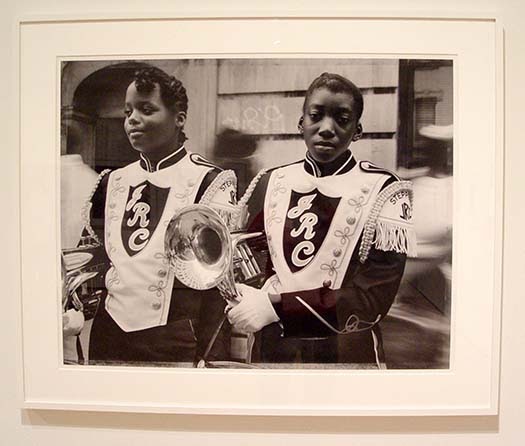 The intimacy between the photographer and subject reminded me a little of Diane Arbus, but with a completely opposite affect. There's an element of love and trust in these photos that resonate off the walls. 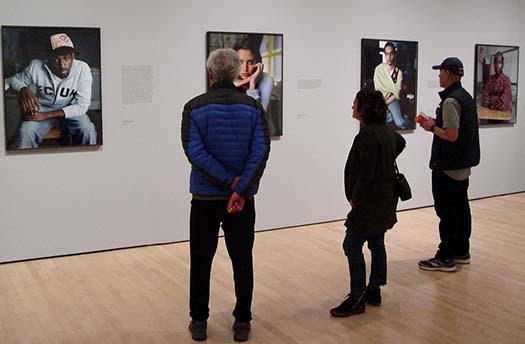 In the early oughts he worked on Class Pictures, a series of portraits of teenagers from around the country with short biographical statements by the subjects themselves. 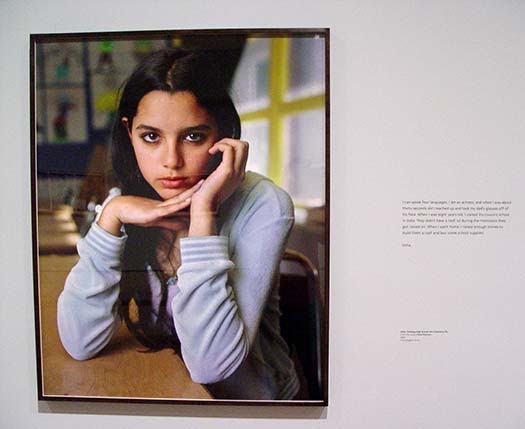 Pictured above is Usha, Gateway High School, San Francisco, CA (2006) and she writes: "I can speak four languages. I am an actress, and when I was about thirty seconds old I reached up and took my dad's glasses off of his face. When I was eight years old, I visited my cousin's school in India. They didn't have a roof, so during the monsoons they got rained on. When I went home, I raised enough money to build them a roof and buy some school supplies." The Birmingham Project from 2012 is a series of diptychs based on age, of the girls who were killed in the 1963 Baptist Church bombing and what age they would be if they had lived. In another room is Night Coming Tenderly, Black, a series of huge dark photographs of nighttime in the Ohio countryside where the Underground Railroad ran through. The pictures are non-reproducible and somehow give off a spooky 3D effect when you study them closely.
Posted by Civic Center at 9:16 PM No comments: 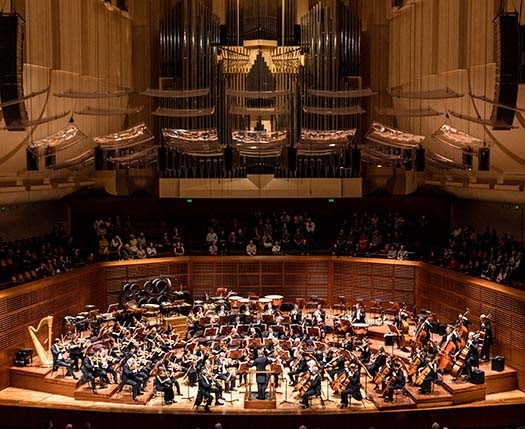 The newly designated San Francisco Symphony Music Director, Esa-Pekka Salonen, conducted two weeks of concerts recently at Davies Hall, and there was plenty to enjoy. The organization also announced programming for the 2020-2021 season with Salonen taking the helm, and there is all kinds of interesting music that we haven't heard in a long time at the Symphony.

Two weeks ago the concert started off with Funeral Music for Queen Mary (after Henry Purcell), a modernist riff on the 17th century English composer by Steven Stucky which Salonen had commissioned while leading the LA Philharmonic. The orchestra was brass and percussion heavy with no strings, and this was followed by Britten's Les Illuminations song cycle where the chamber orchestra was nothing but strings. Soprano Julia Bullock sang the obscure French poetry with such conviction and resounding beauty that I for one was stunned, and it helped that I had bought a rush ticket for the front row and was able to hear her full blast. The seating didn't work so well for Ravel's Mother Goose Suite in the second half because the colorful writing for the back of the orchestra (winds, brass, percussion) becomes muffled. (All orchestra photos are by Brandon Patoc.) 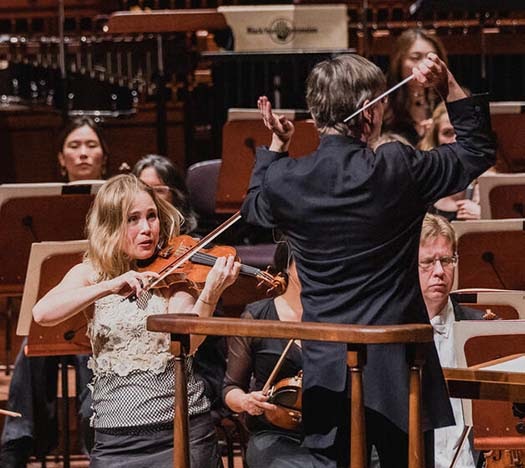 The next week began with a fairly unknown Beethoven overture to a play called King Stephen. This was followed by Salonen's own four-movement Violin Concerto which he wrote in 2009 as he was about to leave the LA Philharmonic post after close to two decades. I heard the half-hour concerto in 2011 with the SF Symphony and soloist Leila Josefowicz, for whom the concerto had been written, and she was back with the composer conducting again in 2020. 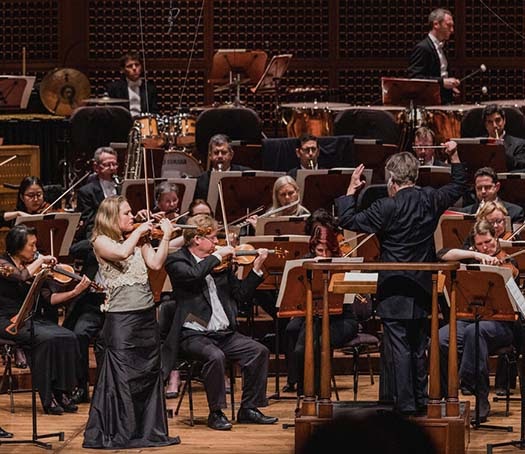 Josefowicz was still impressively virtuosic and hyper-athletic in her performance, but her concert dress was unfortunate, one of the ugliest specimens of that strange genre I have seen. And my reaction to hearing the piece remains the same, which is that the concerto is fascinating but too dense for me, particularly in the long final movement. The problem may be mine, though, because music lovers who I know and trust confessed at intermission that they were dazzled by the concerto. 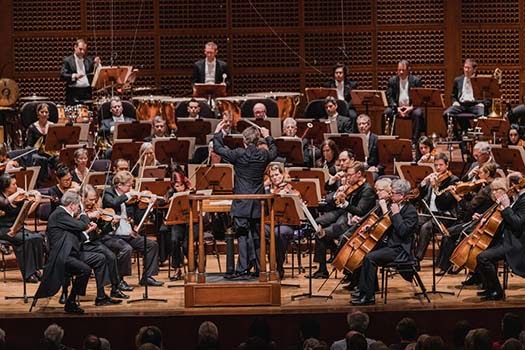 What I found dazzling was the second half of the program, where Salonen conducted the Danish composer Carl Nielsen's 1922 Fifth Symphony. Sounding very much like Shostakovich (who was 14 when this was composed) mixed with a strong dose of Sibelius, the symphony is beautiful, bizarre, and unlike anything I have ever heard. 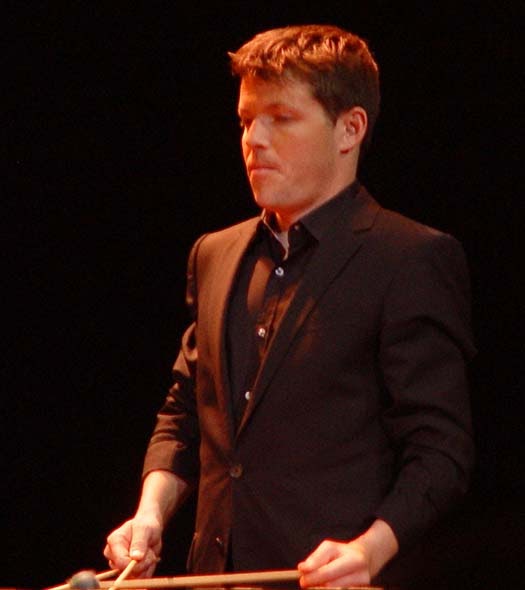 Written soon after World War One, the first half of the two-movement work sets up a snare drum working with and opposed to the entire orchestra, and percussionist Jacob Nissly above had a field day with the solo role, making his way from the orchestra level to the terrace where he towered over the orchestra like a Cupid of War. In his original score, Nielsen wrote: "improvise as if at all costs he wants to stop the progress of the orchestra". Everything I've heard by Nielsen is sort of wonderful, and he is a major contender in the Overlooked 20th Century Composers canon. Hoping to hear more.
Posted by Civic Center at 7:11 PM 3 comments: