Pandemic in the Neighborhood 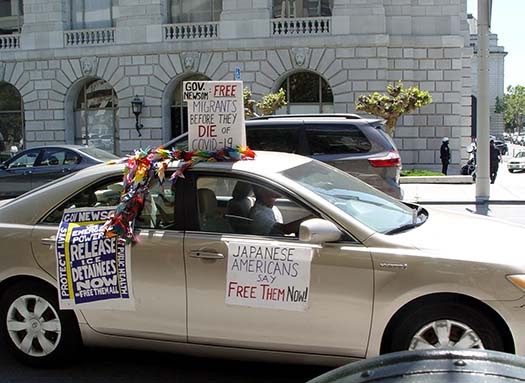 Blaring car horns appeared under our windows at noon on Thursday from a mobile demonstration. 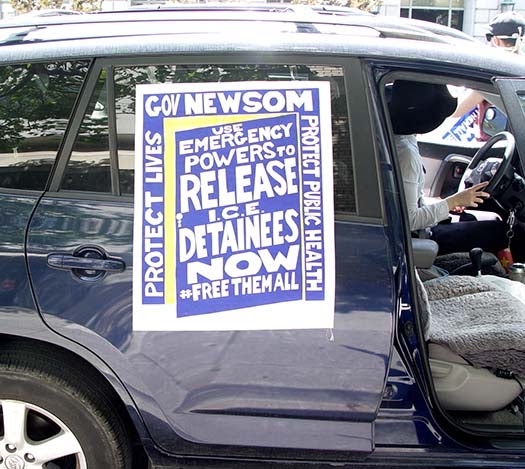 I prayed it wasn't a right-wing, astroturf REOPEN protest, and my prayers were answered. The dozen or so vehicles festooned with signs were there to ask for the immediate release of immigrants in ICE custody. Cruise ships, nursing homes, homeless shelters, and jails are currently the deadliest places to be. Freeing people from ICE detention centers is an ethical no-brainer but politically fraught. 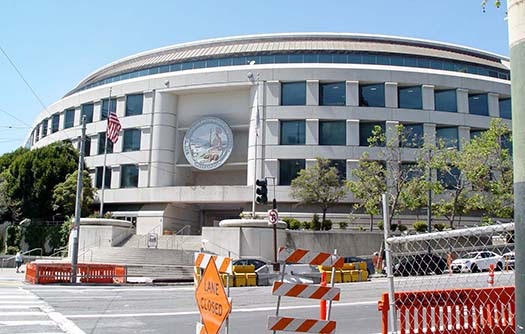 The protest was small, about a dozen vehicles and they spent an hour or so circling the block, repeating the same error of many other California-focused protests over the decades. The State of California offices are actually a couple of blocks away where the California Supreme Court presides, but they don't have a fabulous sculpture of the California Seal, so everyone protests in front of the California Pubic Utilities Commission offices instead. 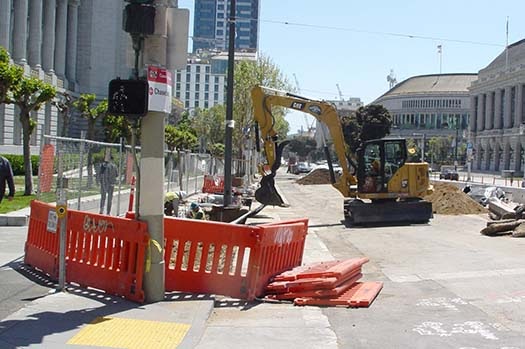 Although sympathizing with the cause, we didn't feel like listening to a horn symphony for an hour, so we walked to Mexican Street Food on 9th Street for burritos (recommended). A surreal detail was that the endless Van Ness BRT construction project that has seemingly stretched longer than a decade was still going on in the midst of a pandemic. A lone heavy equipment driver was slowly doing something in front of City Hall. 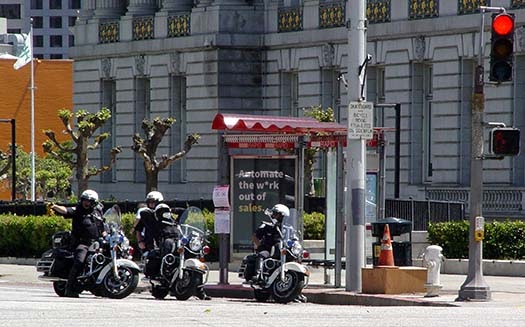 At the corner of Van Ness and Market, half of a typically overstaffed police contingent was hanging out. The only time I actually see a police presence in San Francisco is during parades and peaceful protests, but then they mysteriously disappear and are nowhere to be found. 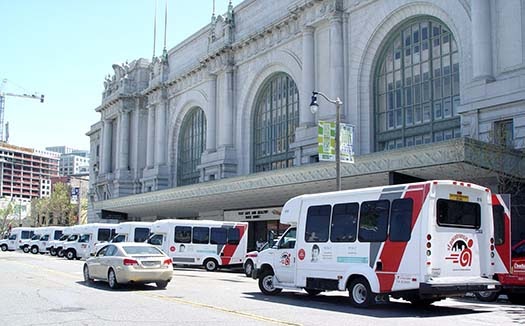 The front of Bill Graham Auditorium seems to have become the staging ground for an army of SF Paratransit vehicles. 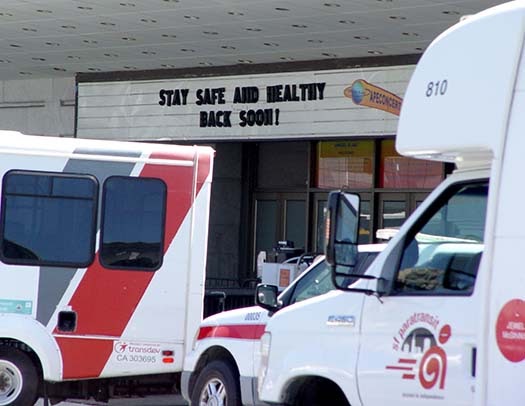 It's a pleasant, safe feeling block on Grove Street. 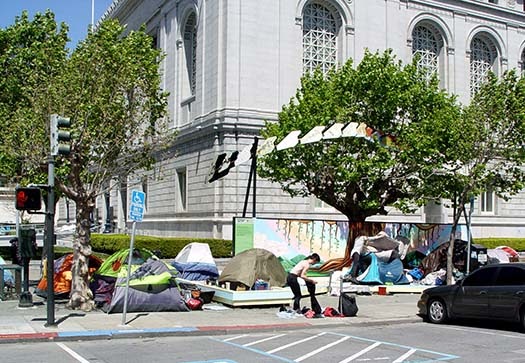 The rest of the neighborhood is a different story. 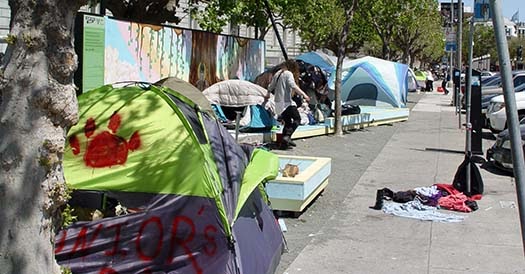 Living in a tent on a sidewalk is probably much safer than being in a shelter right now, but there are no showers and bathrooms for people, which is just begging for public health disasters in addition to COVID-19. 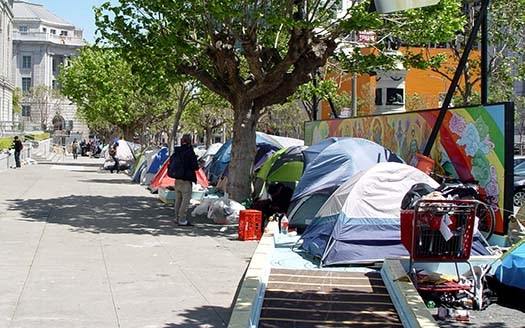 I wish San Francisco would set up a public campground like the city did after the 1906 earthquake in Golden Gate Park. If people can't afford homes, let them at least have tents in an outdoor setting with bathrooms and showers. 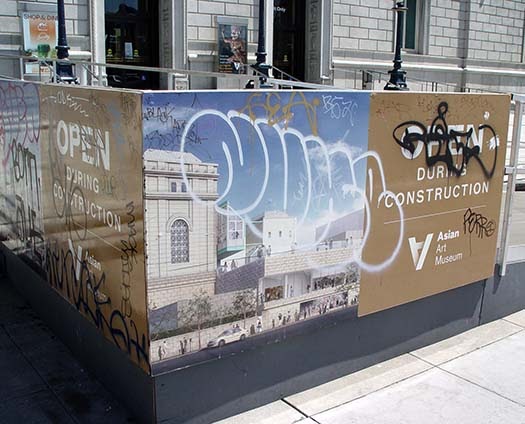 Though it would be lovely to take a walk through the neighborhood for some simple exercise, I rarely do it these days. The combination of drug addicts, mentally ill, and the down-and-out sheltering in place together when the only place they have are the sidewalks is extremely dispiriting. 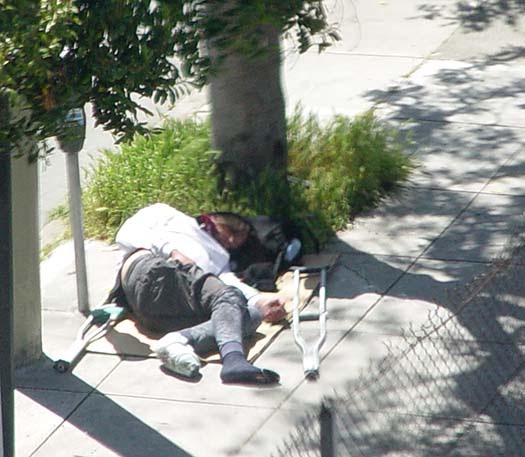 We are now living in the dystopian world that our contemporary literary Cassandras (Doris Lessing, Margaret Atwood, Octavia Butler) predicted over the last 50 years.
Posted by Civic Center at 5:38 PM 2 comments: 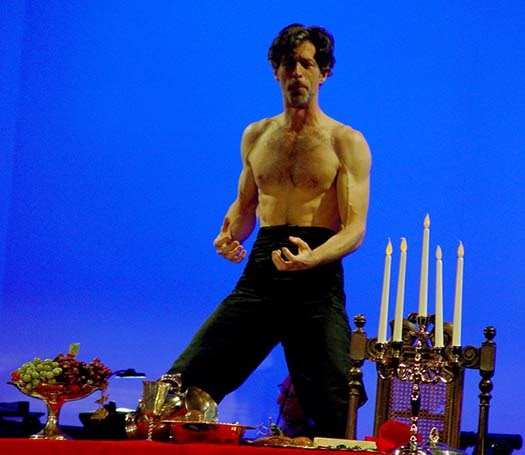 Four Sundays ago, in a different world, Pocket Opera presented Mozart's Don Giovanni at the Legion of Honor museum. It's delightful to report that the local cast was exceptionally strong, the English translation by Donald Pippin was brilliant, and baritone Anders Froehlich above portrayed one of the most convincing Giovannis I have ever seen. 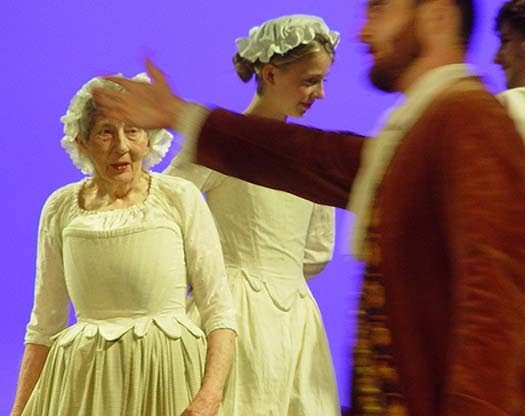 The March 8th performance was probably the last opera to be produced live in San Francisco before the coronavirus pandemic shut the city down, which felt oddly fitting since Don Giovanni was my gateway drug to opera addiction in 1974. As a complete operatic novice, I bought $3 standing room tickets and saw most of the San Francisco opera season that fall, but thought the overwrought dramaturgy was silly and that most of the audience was attending for the lavish sets and costumes, whereas I was a pure, snobbish music lover. (Pictured above is supernumerary Ann Williamson as a delighted peasant in the first act party scene). 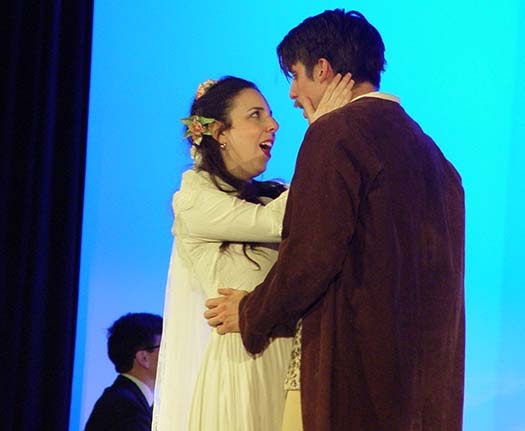 And a young, ignorant one at that. Looking at the SF Opera archive, my indifference to the 1974 season looks laughable since it was filled with one legendary singer after another performing signature roles. It began with Leontyne Price in Puccini's Manon Lescaut, followed in order by Thomas Stewart, Kurt Moll, and Eva Randova in Wagner's Parsifal, Leonie Rysanek in Strauss's Salome, Renata Scotto in Puccini's Madama Butterfly, Jess Thomas and Birgit Nilsson in Wagner's Tristan und Isolde, Frederica von Stade in Rossini's La Cenerentola, Joan Sutherland in Massenet's Esclarmonde, James King and Pilar Lonrengar in Verdi's Otello, Katia Ricciarelli and Luciano Pavarotti in Verdi's Luisa Miller, and Beverly Sills in Donizetti's The Daughter of the Regiment. But it was Don Giovanni that hooked me. Experiencing Mozart's extraordinary music and Da Ponte's subversively brilliant libretto for the first time brought on a moment of sudden, stupefying enlightenment, "Oh, this is supposed to be great, life-changing art. I had no idea." (Pictured above are Sara LeMesh as Zerlina with Mitchell Jones as Masetto, her sweet, oafish betrothed.) 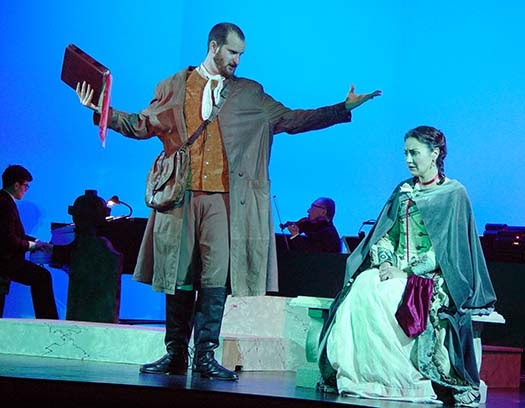 Having now seen the opera an uncountable number of times over the years, I wasn't expecting to encounter anything new at the barebones production of Pocket Opera, but soon realized I had never heard the work in English before. Though most Italian opera librettos don't translate well into sung English, this rendition by company founder Donald Pippin is ingenious and musical. For instance, in the famous Catalogue Aria, Leporello informs Donna Elvira that she is merely one in a very long list of seduced and abandoned women in Don Giovanni's wake, detailing how many in each country, and climaxing with "Ma in Ispagna son gia' mille e tre" (literally "But in Spain there are already one thousand and three"). There are five syllables in "one thousand and three" and only three syllables in "mille e tre", and Pippin's solution was to use the fact that "mille e tre" is sung twice, making up six syllables which he turns into "thousand plus/one, two, three," a witty and musically elegant solution. 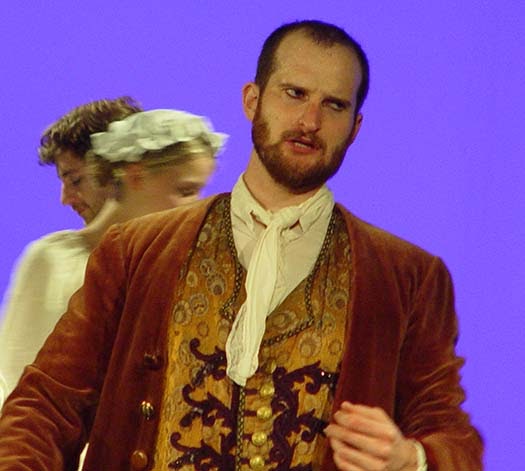 The translation revealed how great the role of Leporello really is, bouncing back and forth between cynicism, decency, fear, and guile, and bass-baritone Spencer Dodd ran with it in a remarkably funny performance. This production also crystallized what different worlds the characters exist in, with peasants and royalty acting out their roles sincerely while Giovanni and Leporello view them all with mocking scorn. It's as if the two walked in from a different comic opera, uttering mocking jokes while everyone else takes themselves very seriously, a plot device that librettist Hugo von Hofmannsthal recycled for Strauss's Ariadne auf Naxos two centuries later. 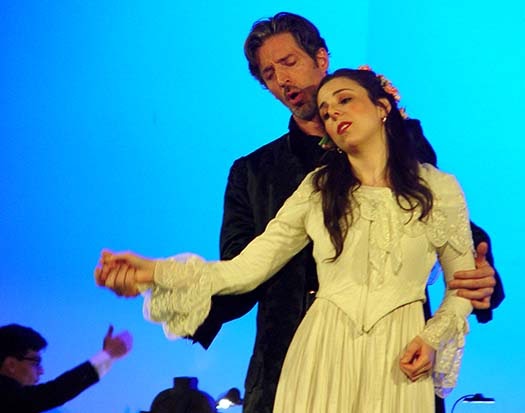 Soprano Sara LaMesh, who made such an impression last summer in Missy Mazzoli's Breaking the Waves at West Edge Opera, sang the peasant girl Zerlina. The famous duet where she is seduced on her wedding day was beautiful to hear and sexy as hell. Froehlich is not only indecently handsome but has a dancer's grace on the stage, making it obvious why Zerlina and the other 1,003 Spanish women did not resist. 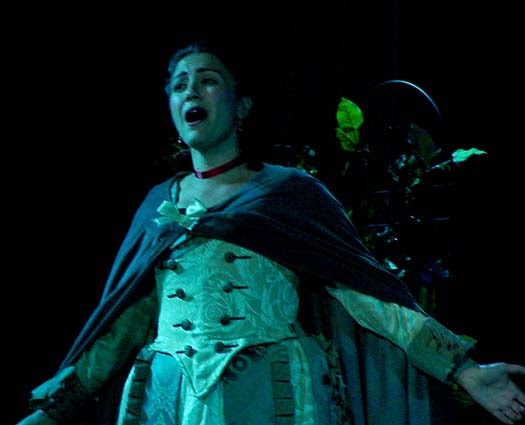 His genuine sexiness onstage also made the alternately enraged, abandoned and wistfully longing character of Donna Elvira make sense for once. She can often come across as screechy and masochistic, and her big arias can go sideways fast if you don't have perfect pitch, but Jaime Korkos made her warmly sympathetic and sang the music beautifully. 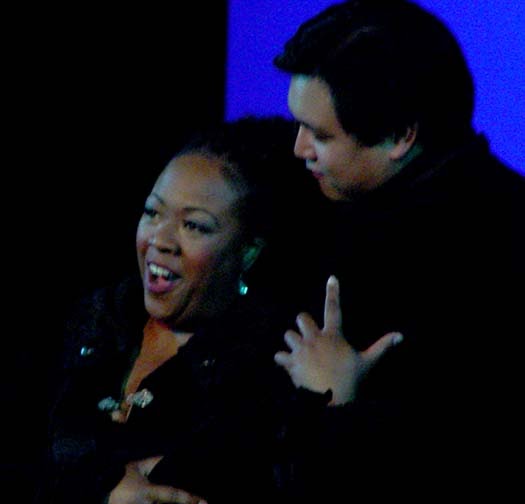 Rabihah Davis Dunn as Donna Anna had a gorgeous sound in her very challenging music and was always a pleasure to watch, but Kevin Gino as her boring boyfriend Don Ottavio was overmatched by the role, with his two ridiculously gorgeous arias going for naught. 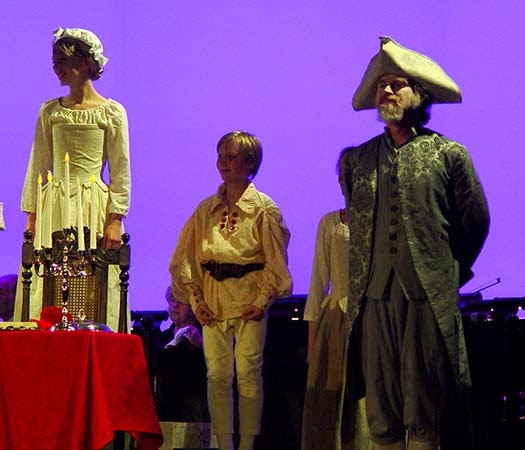 The Commendatore was sung by company stalwart Jason Sarten, and his huge, booming bass was perfect for the strange role which has him murdered in the first scene and then reappearing three hours later as a stone statue to drag Don Giovanni to hell. In most productions I've seen, electronics are usually employed to give some type of ghostly sound to the final scenes, but this production dispensed with that and it was a pleasure to hear the music unadorned. Plus, Sarten's bass was powerful enough to sound like he could drag somebody to hell quite easily. 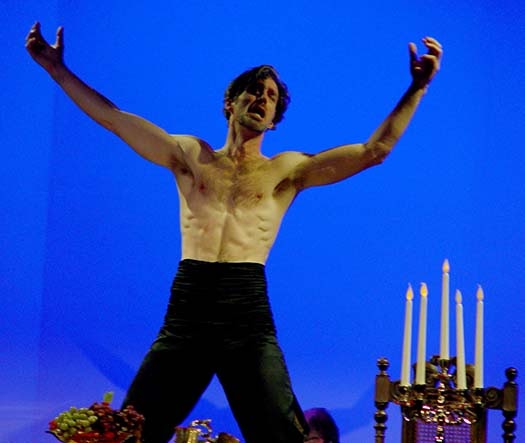 Froehlich had the smallest of all the baritone voices in this production, but his musicianship was superb and he nailed the characterization of a master sensualist who laughs at and rejects all of society's pieties. And kudos to director Jane Erwin who staged the proceedings clearly and made Froehlich go shirtless only after he had died and was wandering around among the cast, unseen in some limbo like the movie Ghost. 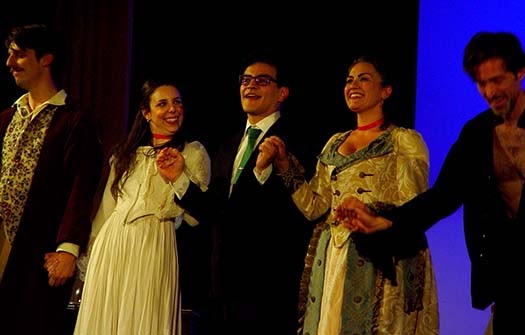 A twelve-member "pocket philharmonic" was led from the piano by Cesar Canon. The overture was a little anemic because of the small forces, but the rest of the orchestral reduction worked fine and was performed well. I hope the company survives the pandemic because it's doing fine work.
Posted by Civic Center at 4:35 PM No comments: