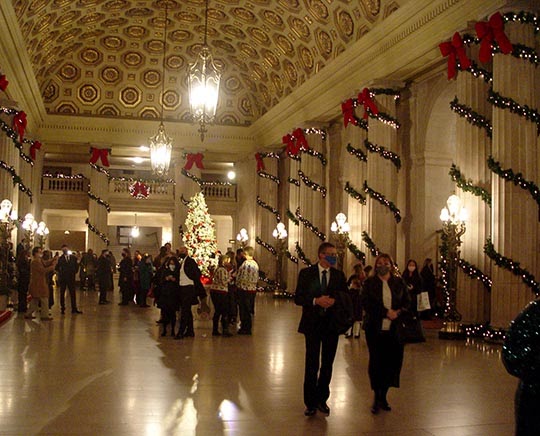 After the triumphant returns this fall of both the San Francisco Opera and the San Francisco Symphony across Grove Street, it was finally San Francisco Ballet's turn for resurrection on Friday night. This was after the company was suddenly shut down mid-season in March of 2020 when the pandemic arrived. 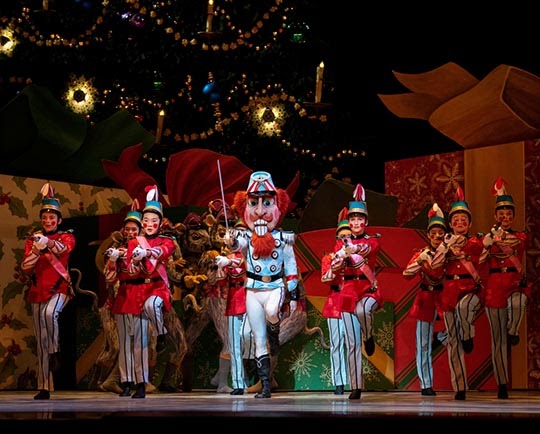 Tchaikovsky's 1892 Nutcracker was a particularly fitting vehicle for the San Francisco Ballet's return since the company gave the ballet's first full-length performances in the U.S. in 1944, ten years before Balanchine staged his version with the New York City Ballet and a couple of decades before it became a Christmas perennial all over the world in the 1960s. (All production photos by Erik Tomasson.) 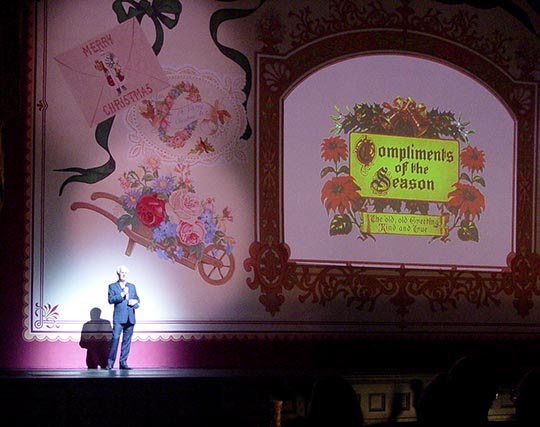 The timing also felt apt because this is the last year for Artistic Director Helgi Tomasson before his retirement from the company he has led for 37 years, and the 2004 Nutcracker is one of his best productions, set in a 1915 San Francisco Victorian before journeying into an enchanted dreamland. 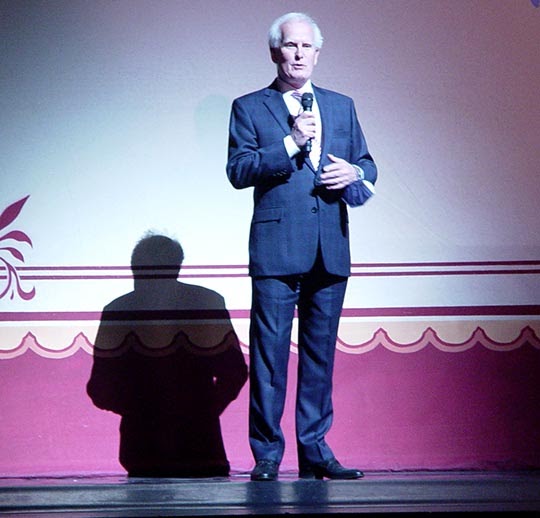 Tomasson came onstage before the show and gave a short, emotional, heartfelt welcome to the audience which roared back in happiness. 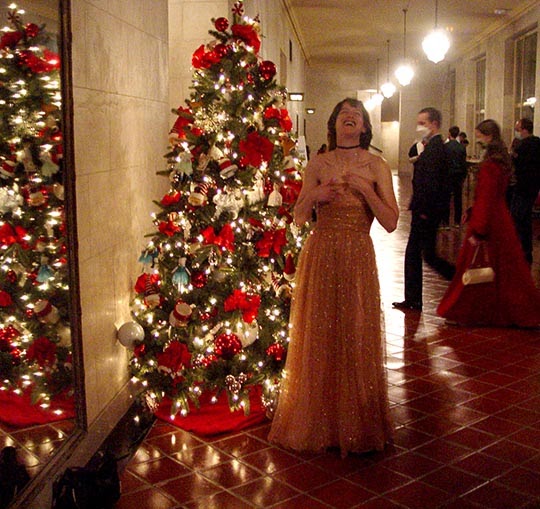 Following the lead of both SF Opera and SF Symphony, proof of vaccination was required for entry and from what I observed, just about everyone was conscientious about wearing their masks inside the auditorium. 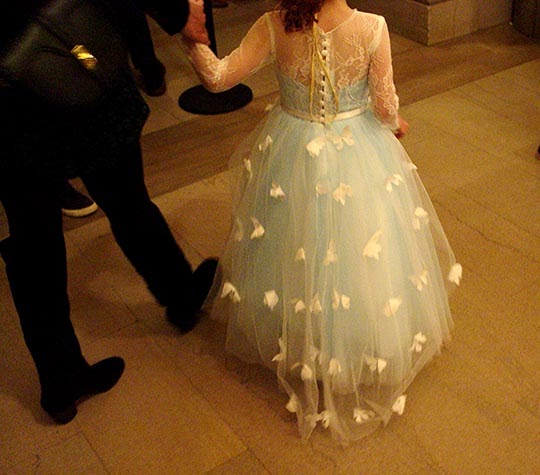 The opening audience was a delightful mixture of little girls in princess dresses... 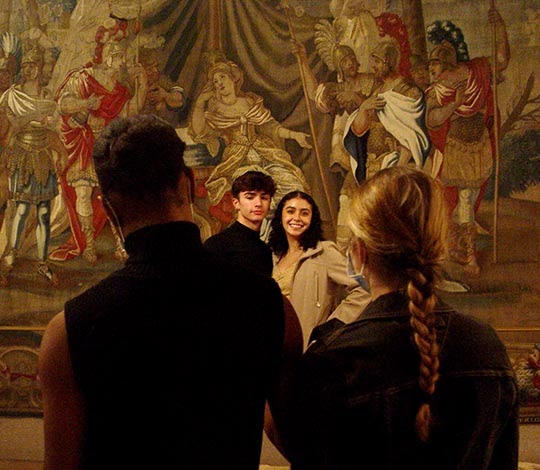 ...what looked to be ballet students... 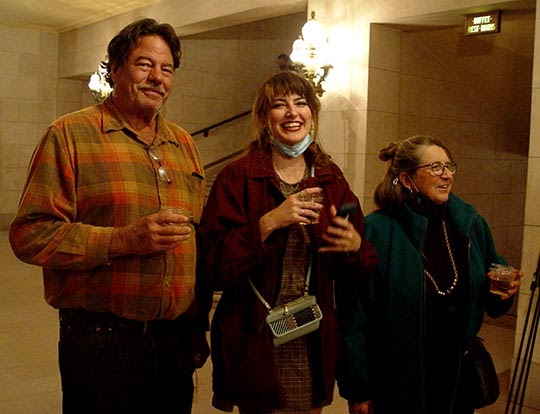 ...and multi-generational family groups where the SF Ballet Nutcracker is an annual tradition. 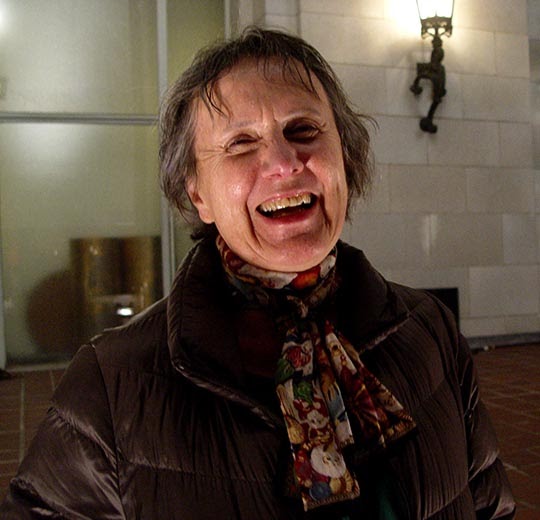 On the Grand Tier outdoor balcony, we ran into Andrea Kohlruss, who I met when we were supernumerary slaves in a legendary 1991 SF Opera production of Elektra. In 2004, she was offered a cameo role in the new production of Nutcracker as a nun crossing the stage during the Prologue, and she's been doing it ever since, except this year because supernumeraries were replaced by members of the ballet company as a COVID precaution. 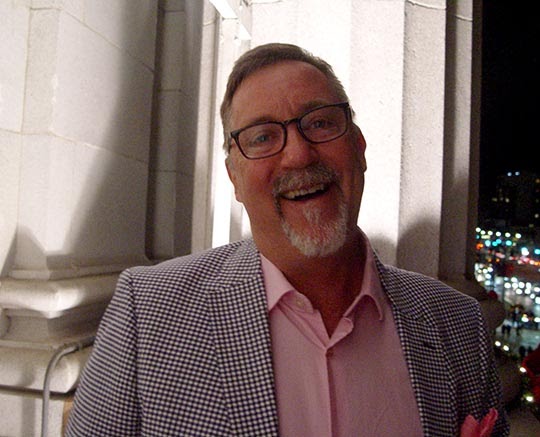 Austin had never seen a professional production of Nutcracker before, and he was unreasonably excited beforehand. 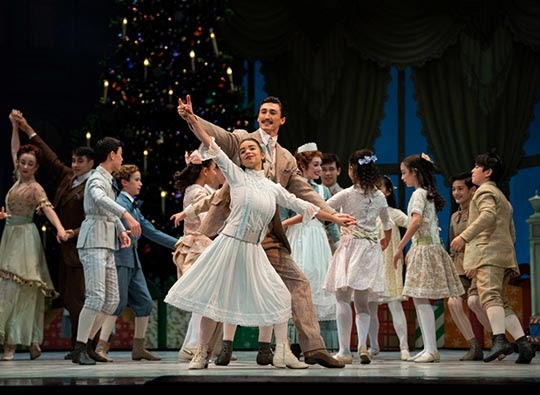 When asked afterwards what he tought of the production, Austin replied, "It exceeded all expectations." 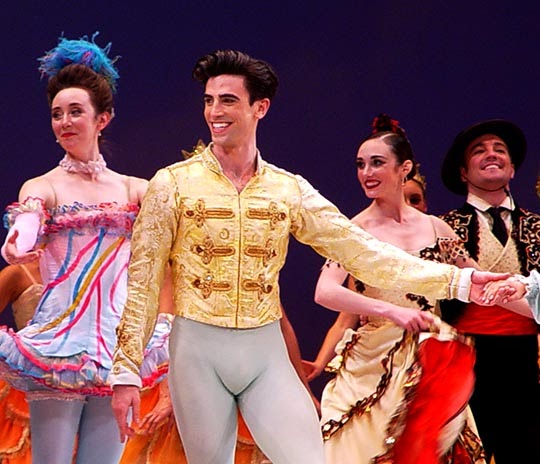 The standout dancer of the evening was Joseph Walsh as the Nutcracker who is actually a Handsome Prince. His style is less flashy than it is elegant, with landings from leaps that look effortless, weightless, and altogether beautiful. He was also a gallant partner for his various ballerinas, who all seemed to dance better when he joined them. 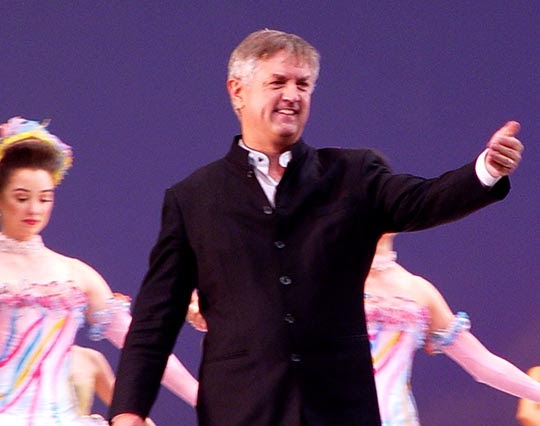 The greatest joy for me was listening to the SF Ballet orchestra perform Tchaikovsky's score with both delicacy and passion under longtime Music Director Martin West. There was nothing routine about the playing and it was a potent reminder of how gorgeous this musical score can be. 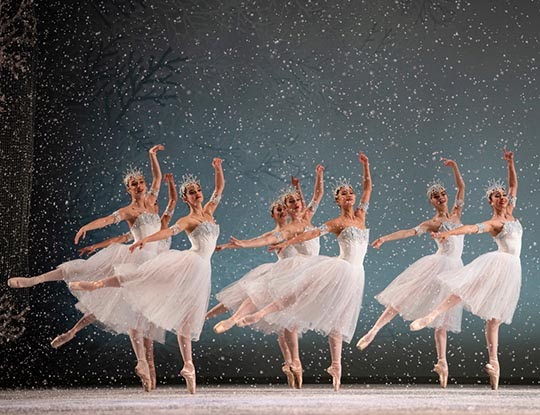 There are 25+ performances remaining before New Years Day at the SF Opera House (click here). The snowstorm finale of Act I is worth the price of admission alone.
Posted by Civic Center at 11:41 AM 2 comments: 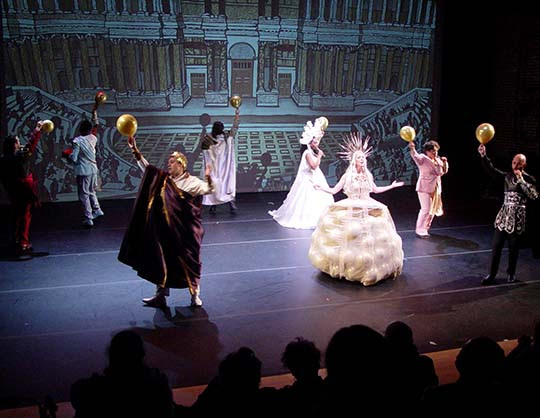 I saw two marvelous Italian opera productions in San Francisco recently and they both focused obsessively on female virtue as a motivating plot device. (Production photos are by Valentina Sadioul.) 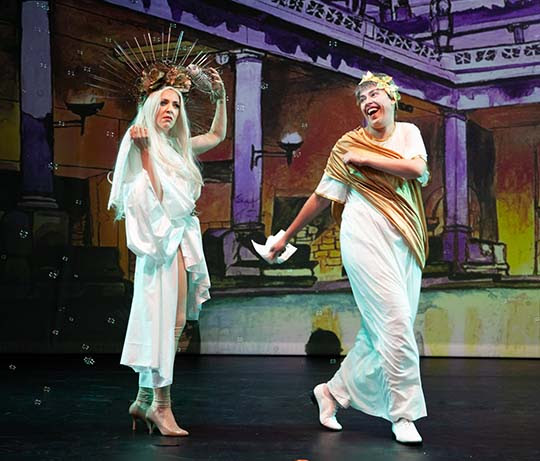 The first offering at the ODC Theater was the low-budget, high-creative Ars Minerva production of Messalina, a 1679 Venetian Carnival opera by the composer Carlo Pallavicino featuring the licentious title Roman Empress who was married to the Emperor Claudius. She was reputed to have infamously cuckolded him with a series of lovers before her eventual execution, and her name is still a byword for slut in Italy. The soprano Aura Veruni was a silly, horny Empress in one fabulously crazy costume after another (designed by Marina Polakoff), and her clueless, sexually predatory Emperor was sung by Deborah Rosengaus. They both sounded wonderful, and seemed to enjoy playing bored, upper-crust characters straight out of La Dolce Vita. This must have come as a relief to Aura Veruni, since she was in danger of being sacrificed in Ars Minerva's 2018 production of Ifigenia in Aulide and raped by another Roman emperor last summer in West Edge Opera's Cavalli opera, Eliogobalo. 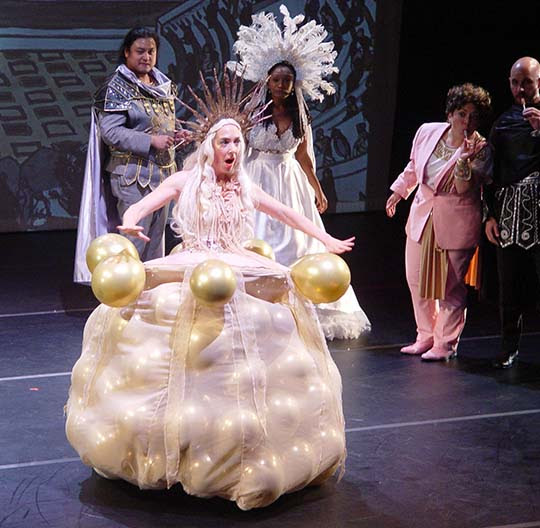 The other two couples were Kevin Gino as Tullio who is jealously paranoid about his virtuous wife Floralba, and Kindra Scharich as her sister Erginda who spends most of the opera in male drag chasing down Tergisto, the cad who broke her heart and ruined her honor. 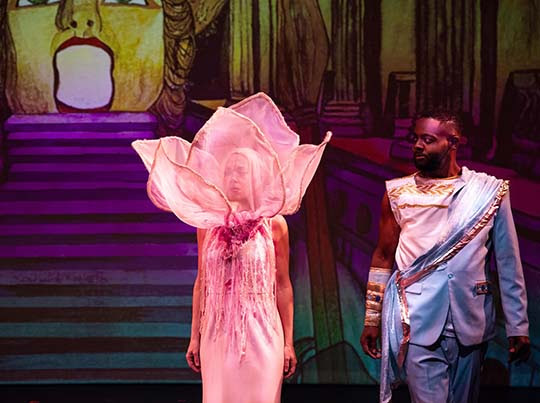 My favorite performance was by Marcus Paige as the servant Lismeno who enabled and surveyed all the dramatic misalliances with an amused contempt. Patrick Hagen as Caio, Messalina's soldier boy toy, also offered a funny performance as someone constantly on the verge of being discovered in flagrante delicto. 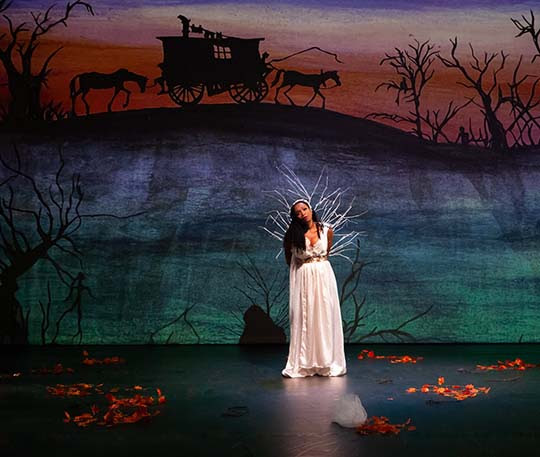 Though the music by Pallavicino was absorbingly lovely, the libretto by Francesco Maria Piccioli was more misogynistic than usual with a streak of ugliness. Poor Shawnette Sulker as Floralba is tied to a tree and left to die late in the opera by her jealous husband, only to be rescued by Emperor Claudio who then wants to rape her. 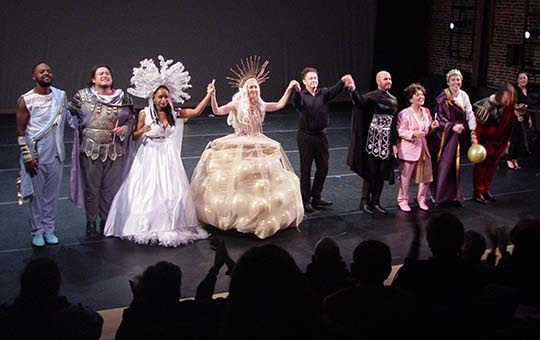 Director Céline Ricci staged the opera as alternately serious and farcical. Early Venetian operas traditionally had a happy ending with all the characters singing together onstage, but Ricci undercut the artificial finale with her staging. The Emperor pair lounged languidly on a divan, Floralba pushed her husband's hand away during their reconciliation, and only Erginda/Alindo was joyful about capturing her bad boy. Jory Vinikour conducted an original instrument sextet that was superb. I can hardly wait to see what Ms. Ricci restores from the Venetian vaults next year. 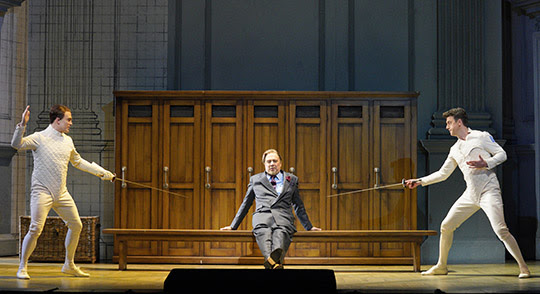 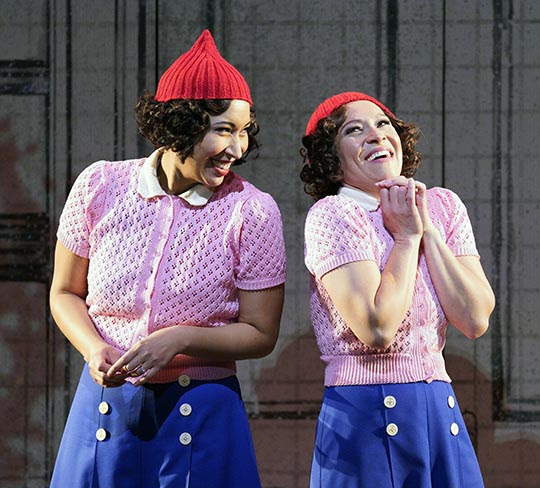 The victims of this cruel caper are the sisters Fiordiligi (Nicole Cabell) and Dorabella (Irene Roberts) who are wooed throughout the opera by their boyfriends in disguise, which basically consisted of large moustaches. 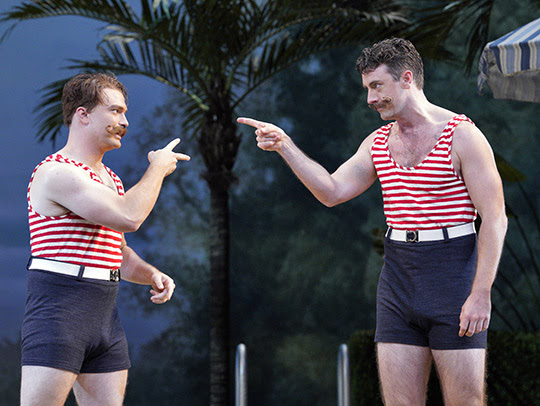 The ensemble meshed perfectly, dramatically and musically, with the achingly beautiful tenor of Ben Bliss a particular highlight. His big aria, Un aura amorosa, was as moving as any version I have ever heard. 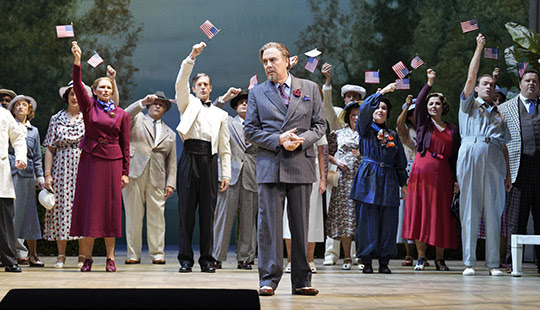 The clever production design by Erhard Rom used the same American Colonial mansion set from 2019's The Marriage of Figaro, now updated to a country club in the 1930s, complete with swimming pool and a badminton court. Director Michael Cavanagh's staging was endlessly creative and funny, with the mood organically transforming from broad farce to serious drama, a tricky balancing act that is baked into the opera itself. The ending mirrored that of Messalina, an outwardly happy finale staged as an unhappy resolution, which worked brilliantly. 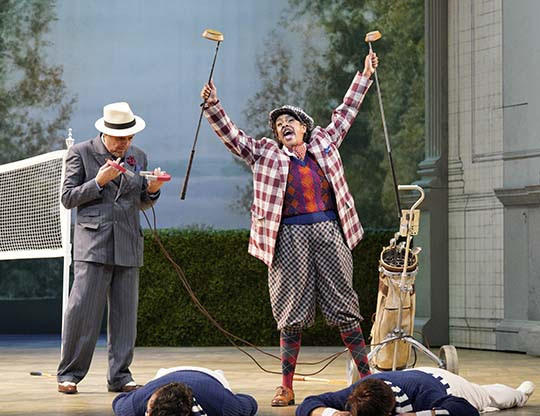 Nicole Heaton was also noteworthy as the maid Despina, here a waitress at the country club, who conspires with Don Alfonso in various ruses, including disguising herself as a doctor called in from the golf course. The conductor Henrik Nánási led the SF Opera Orchestra in a sparkling rendition of what might be Mozart's richest operatic score. Congratulations to everyone involved.
Posted by Civic Center at 10:26 AM No comments: