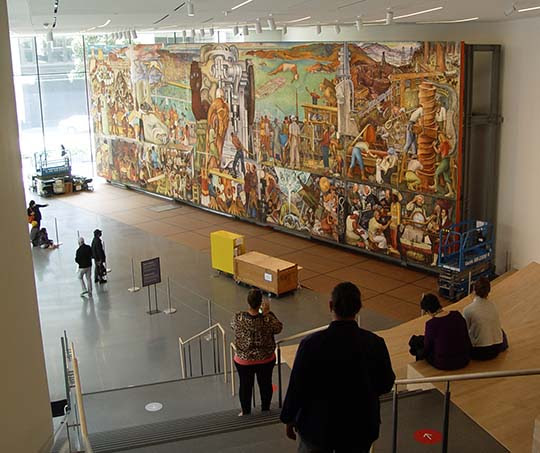 The famous Mexican muralist Diego Rivera was commissioned to paint two murals in San Francisco in 1930, at the SF Art Institute on Francisco Street on Russian Hill, and at the San Francisco Stock Exchange's private dining room (now the City Club). The major impetus for these commissions was the San Francisco-born architect Timothy Pflueger, who designed everything from the Castro and Paramount movie theaters in San Francisco and Oakland respectively, to the art deco masterpiece that is the former SF Stock Exchange building. In the late 1930s, after the Golden Gate and Bay Bridges had just been built, civic boosters including Pflueger managed to get huge amounts of federal money for a world's fair on a newly dredged landfill called Treasure Island. The plan was for it to become the city's municipal airport, which didn't happen because World War Two arrived, and the U.S. Navy took ownership of the mid-bay landfill for decades. The 1939 Golden Gate International Exposition was a financial flop so a second year was added with new attractions, which included the "Gayway" where "sights included sideshow-style attractions, such as little people in a Western setting and a racetrack featuring monkeys driving automobiles." In what was designed to be an airplane hangar, Pflueger commissioned a collection of artists to create pieces for a live audience. It was called Art in Action, and the star attraction was Diego Rivera, returning a decade after his earlier visit to create a 74 by 22 foot mural on ten steel-backed panels. 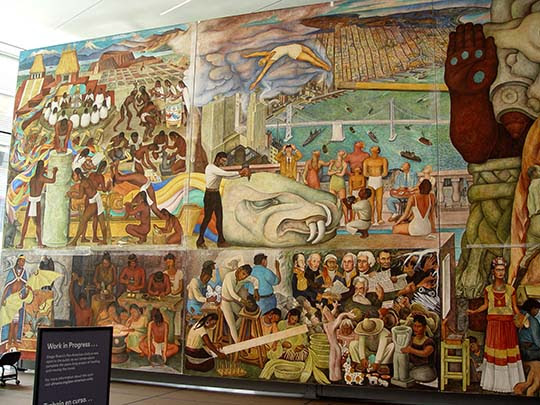 The Expo, including Art in Action, was open from May to September 1940, but Rivera didn't finish the work until November. At the delightful Diego Rivera Mural Project website (click here), they write: "November 29, 1940, the public was again invited to Treasure Island to view Rivera’s finished work. An estimated five thousand people privately previewed the mural. A public viewing of the mural was open on Sunday, December 2nd. An estimated 25-30,000 people crowded into the building to celebrate the masterpiece and to mourn the end of the Exposition. The fresco was then packed into ten crates and put into storage. Pflueger died in 1946 and his [San Francisco City College] library was never built. Rivera’s politics made him the frequent subject of controversy. That reputation in the climate of the post-war “Red Scare” kept the fresco in storage until after Rivera’s death in 1957." 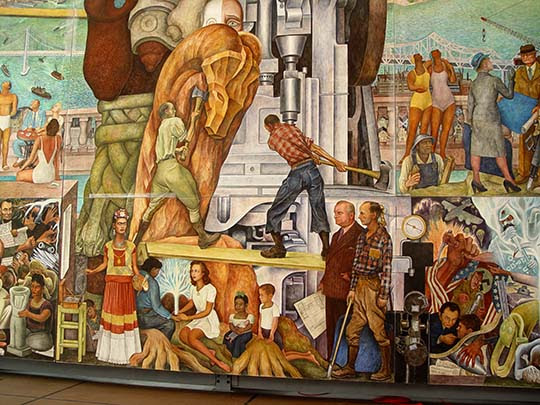 Timothy's brother, Milton Pflueger, convinced the San Francisco School Board to install the work in a new "Little Theater" lobby in a cramped, curving space in 1961. It was better than nothing but impossible to see the mural whole. Recently, there were plans for a new Performing Arts Center at San Francisco City College where the mural could be properly displayed, complete with a formal announcement in 2017, but money problems and the pandemic have put a halt for the time being to any of those plans. In the meantime, SFMOMA has disassembled the ten panels and put them back together in the huge street-level room on Howard Street across from the Thirsty Bear Brewery. The entry is free and the mural will be living there for the next three years. 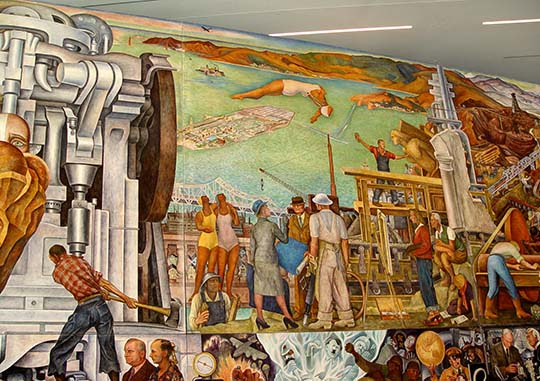 Pan American Unity was Rivera's largest mural and his last in the United States, so it's something of a scandal that it's been effectively removed from public view for eighty years after its Treasure Island debut. According to the mural website: "The current hope is to move the mural to a new venue on the SF City College campus, where it can be seen from outside through a glass facade as Diego Rivera and Timothy Pflueger had planned." 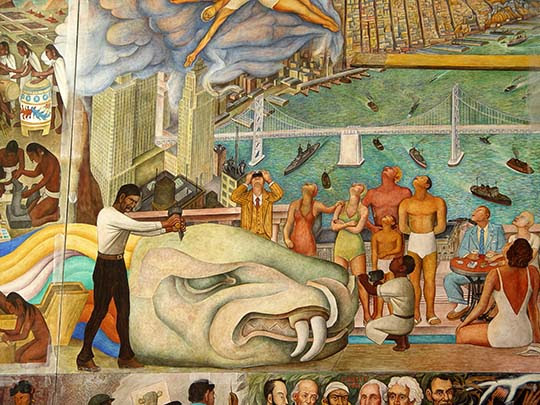 Also on the Project website is a timeline which records in detail the events of 1940 in the lives of both Rivera and Frida Kahlo, which can best be described as eventful. Frida had divorced Diego earlier in the decade, but remarried him at San Francisco City Hall in December. Meanwhile, the Russian revolutionary Leon Trotsky, their Mexico City houseguest and Frida's occasional lover, was assassinated in August on the orders of Stalin, and Frida was interrogated for days by police before being allowed to escape to San Francisco and join the mural party on Treasure Island. 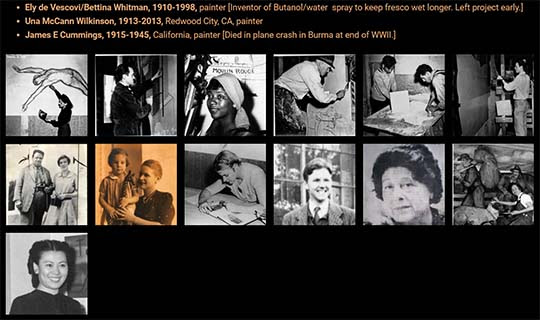 The Diego Rivera Mural Project also tracked down the many Bay Area assistants who helped create the piece in 1940, and their extraordinary diversity in terms of gender and race seems unusual and heartening. Be sure to check out this slice of history if you're downtown.
Posted by Civic Center at 5:57 PM

Saw it in its cramped CCSF quarters -- will make sure to see it whole.