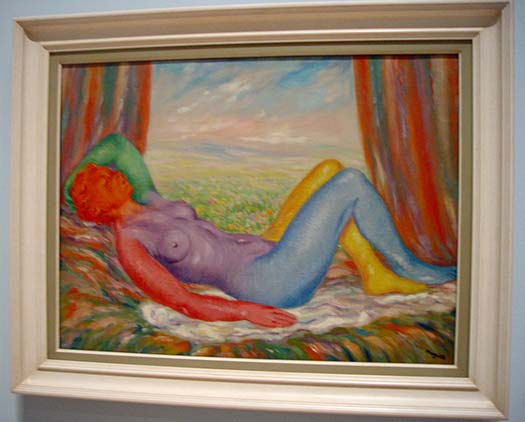 A surprisingly fascinating exhibit of paintings from the second half of Belgian artist René Magritte's career (1898–1967) has arrived at SFMOMA for the summer. 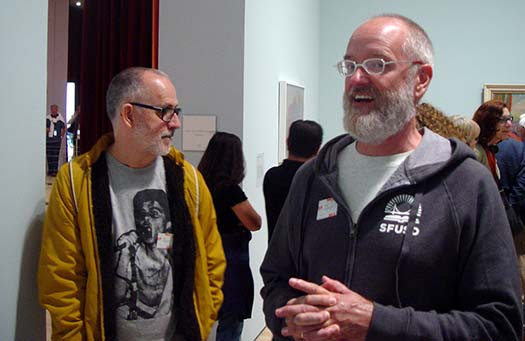 The show is already crammed with visitors, at least on weekends, and I thought my friends Barry and Grant were going to have an attack of agoraphobia trying to slide between bodies to get close to a painting. 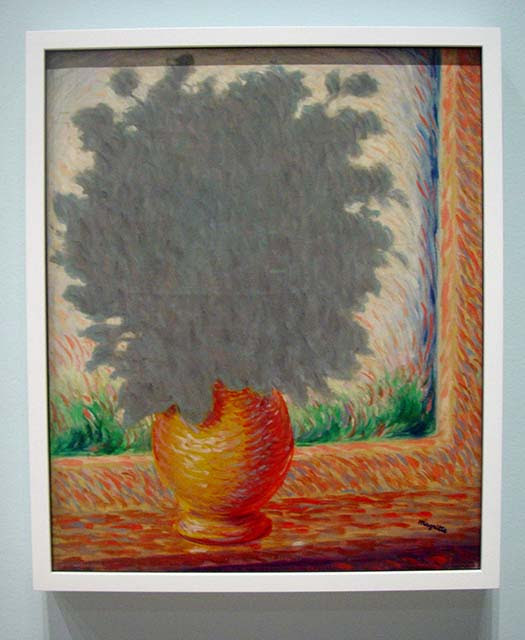 Magritte had a youthful career in the 1920s and 1930s as a wallpaper draughtsman, Brussels ad agency owner with his brother, and a Surrealist painter. During World War II, he diverged from his old style and his paintings started looking like Demented Renoir, including weird details such as not coloring in the bouquet in the 1944 still-life with flowers above. 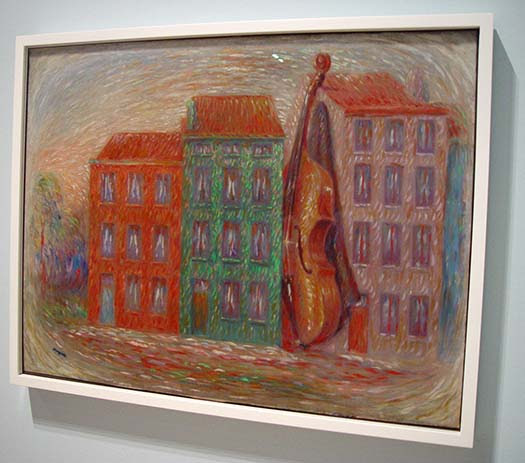 The 1944 painting above is called Image a la maison verte (Image with a green house), leaving out the fact that there's a Giant Violin hanging out next to la maison verte. 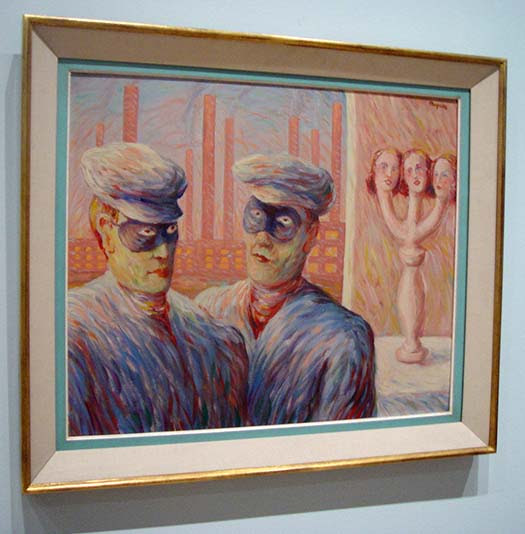 The combination of Impressionism at its cheery fuzziest and disturbing imagery is a singular reaction to World War Two. 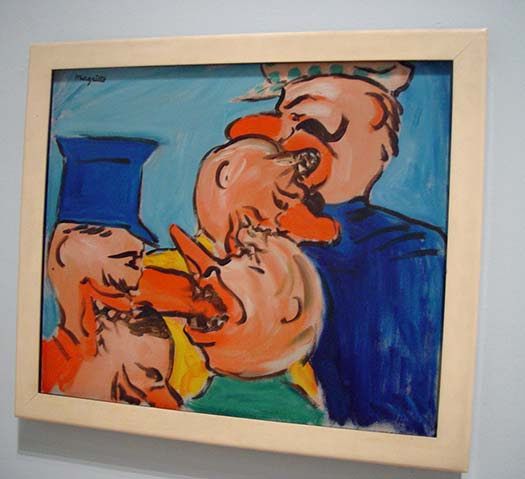 Magritte also flirted briefly with Expressionism in the 1948 Famine above, where a group of men are biting off chunks of each other's faces. 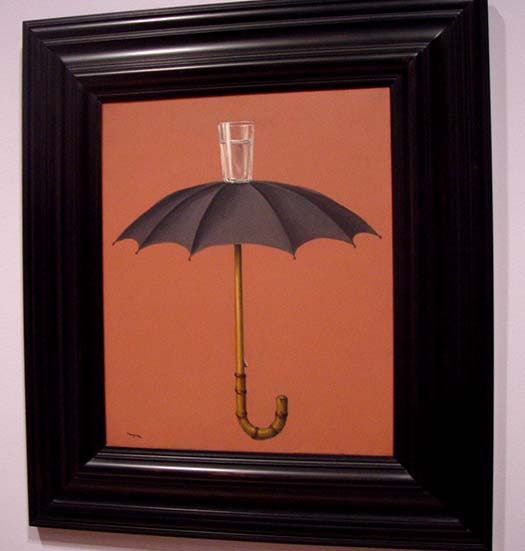 At this exhibit, you can see Magritte regaining his equilibrium in the 1950s where he refines Surrealism, sleekly Modern ad graphics, and the metaphysical in images that are still being digested, reused, and inspiring graphic artists worldwide. 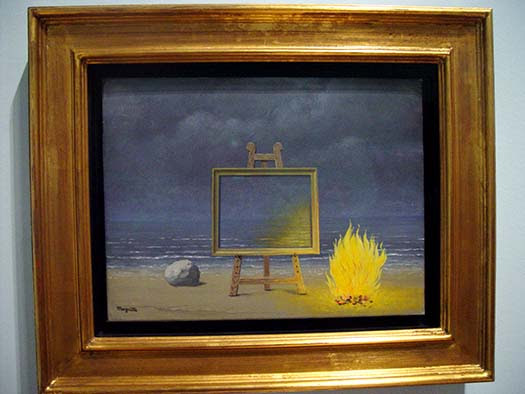 My favorite paintings from the 1950s are essentially visual practical jokes, rendering the impossible with naturalistic representations. 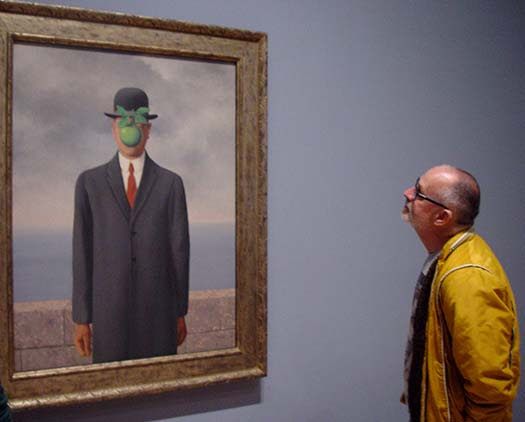 Like his contemporary Salvador Dali or one of his successors, Andy Warhol, he understood that artists are part of the brand, and he started wearing the bowler hat and suit on a daily basis as something of a uniform. 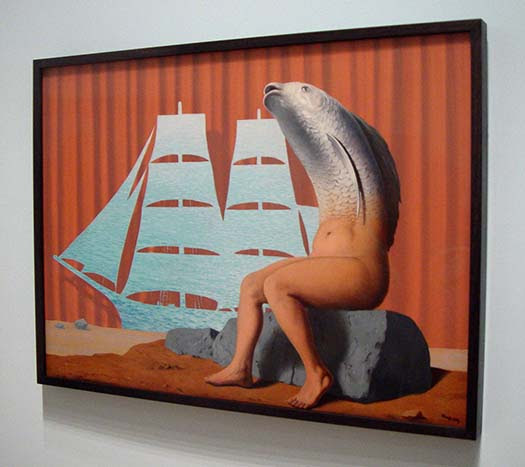 The late 1950s/early 1960s is when Magritte's reputation exploded, and his work from that period has a slightly kitschy aura about it, while still being genuinely weird. 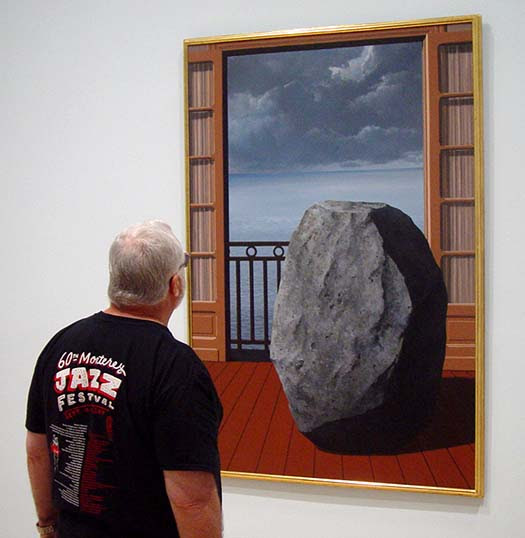 The exhibit enhanced my opinion of Magritte and his art immensely, which is ideally what any art exhibit should do. 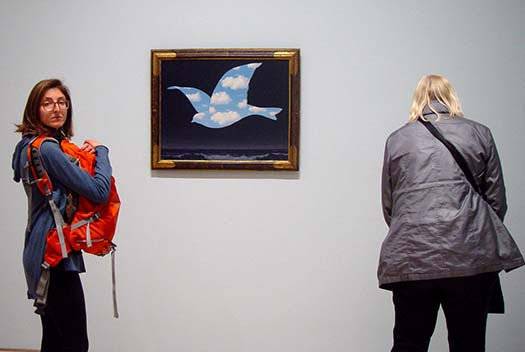 I even forgave him for the image above which was ubiquitous in the 1960s when I was a precocious, judgmental 13-year-old who thought it was silly hippie art.
Posted by Civic Center at 7:37 PM