Boris Godunov at the SF Symphony 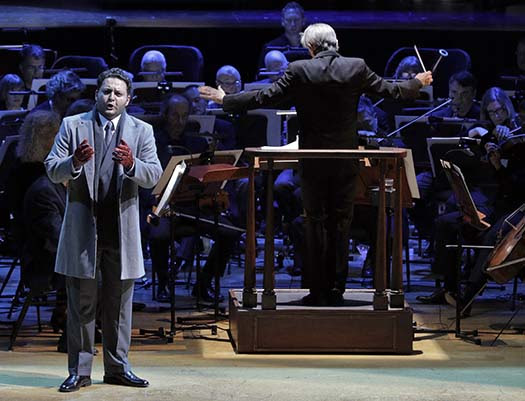 Last week Michael Tilson Thomas led the San Francisco Symphony and Chorus, along with a cast of Russians and Bay Area locals in a "semi-staged" production of Modest Mussorgsky's sprawling 1872 opera, Boris Godunov. The locals did themselves proud, from Alexsey Bogdanov (above) as Andrei Schelkalov, who starts the opera off with an exhortation to the peasant chorus that they pray for Boris to change his mind and become Tsar. Also standing out from the crowd were Philip Skinner as the sadistic Nikitich and Catherine Cook as the Innkeeper, a role she has been performing since a 1992 SF Opera production. (All production photos by Cory Weaver.) 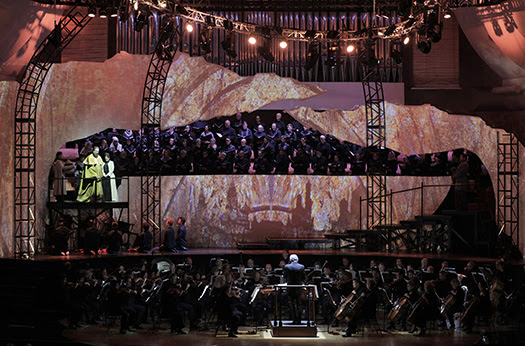 Rather like Boito's Mefistofole, the first two scenes are magnificently grand, employing many characters and a huge chorus, culminating in Boris's Coronation, but then the title character disappears for most of the first half and it turns into an episodic, chamber opera which meanders all over the place. There are many editions of the opera: the original two-act, 8-scene version that the San Francisco Opera produced in 2008 and a longer, three-act version that Mussorgsky created three years later that included a starring soprano role for a Polish princess. The opera has also been reorchestrated, first by Rimsky-Korsakov in the 19th century and also by Dmitri Shostakovich in the 20th century. Everyone seems to have their preferences, but they all have their strengths. The version used by the SF Symphony was Mussorgsky's original orchestration with the St. Basil scene removed and the later Kromy forest scene added on. 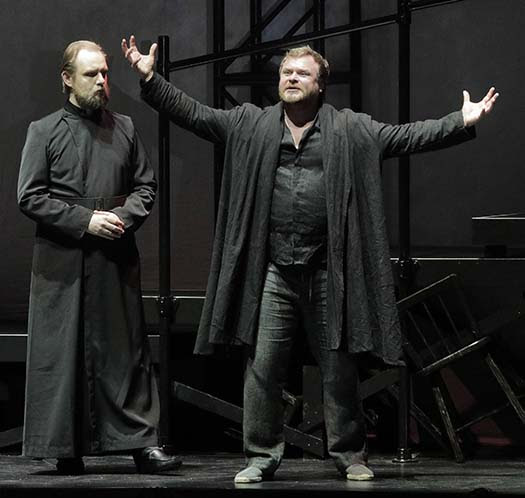 The Russian soloists were mostly very good, including bass Maxim Kuzmin-Karavaev as the monk Pimen, who knows the real story of murder in the Kremlin, and tenor Sergei Skorokhodov as Grigory the monk who spends the rest of the opera pretending to be the grown-up Prince Dmitri, who was probably murdered by Boris.

Vyachaslav Pochapsky as Varlaam, the thief masquerading as a monk, was great at the border inn scene, although the half-dozen supernumeraries/dancers employed throughout the evening by director James Darrah were not particularly convincing as a drunken crowd. 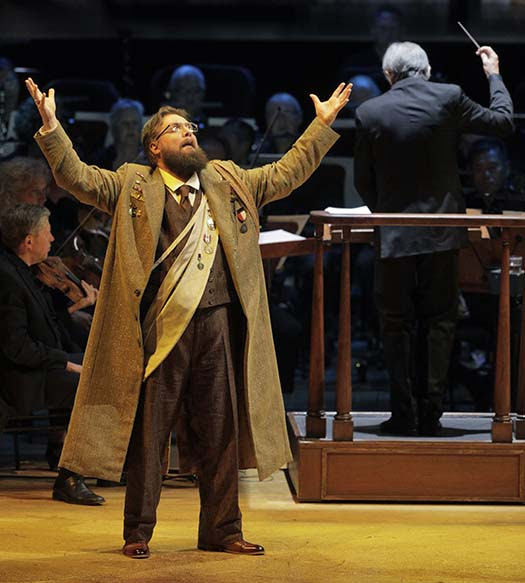 The reason this opera has been produced repeatedly over the centuries is that the music is so astonishingly rich, and also because it provides a role for the title character that's somewhere between Macbeth and King Lear in its depth. For the piece to really work, you need to care about the guilt-ridden monster, which requires a superior singing actor, on the order of a Chaliapin or Boris Christoff or Nicolai Ghiauroff. Though he has a fine voice, the young Stanislav Trofimov as Boris was nowhere near that league, creating a hole in the center of the production. It also didn't help that he was costumed most of the time to look lke he had wandered in from the Broadway production of Natasha, Pierre & The Great Comet of 1812. 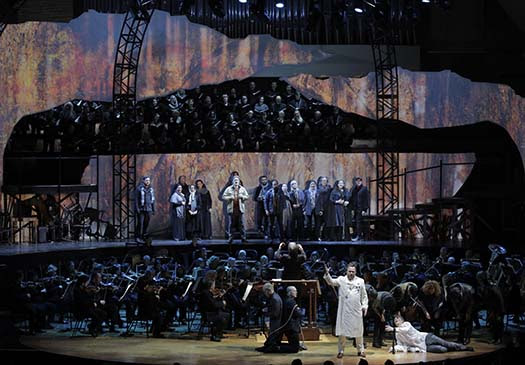 Still, it was wonderful to hear the music so well performed at the Sunday matinee, especially with the jagged strangeness of Mussorgsky's original orchestration. I was a supernumerary in Boris Godunov at the SF Opera in 1992 and 2008, and this was my first time actually watching the opera from the audience. Those two Boris productions also had less than ideal singers in the title role: James Morris in 1992 who was lacking in Russian soul and Samuel Ramey in 2008 whose voice was too shredded at that point in his career. The only time I have ever heard Boris's Coronation aria sung live, perfectly, was at an early rehearsal at the San Francisco Opera in 1992 before James Morris had arrived. The Russian bass, Vladimir Ognovenko, who was playing the minor role of Varlaam, stepped up to the piano during the rehearsal and sang the aria while the choral staging was worked out. By the end, the entire rehearsal room stood stunned by the deeply resonant performance we had just heard, and poor James Morris never stood a chance after that. There was another perfect performance in that production which never made it to opening night, the late countertenor Brian Asawa singing the Holy Fool. He was replaced at the last minute by conductor Runnicles because he thought Asawa's voice wasn't carrying, but it was the wrong decision. Asawa made me and just about everyone else cry during his beautiful, eerie laments about the soul of Russia. Stanislav Mostovoy did a fine job last week, but again, this is music that cries out for the otherworldly.
Posted by Civic Center at 11:22 AM