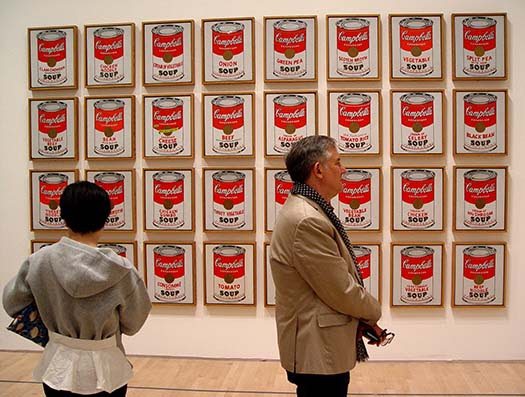 Andy Warhol: From A to B and Back Again is a huge retrospective organized by the Whitney Museum in New York which is currently installed at SFMOMA before traveling to Chicago. 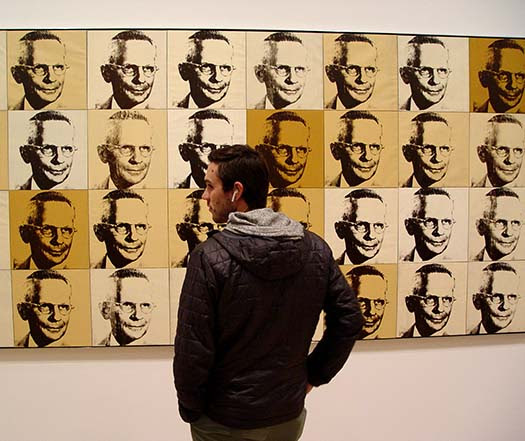 The painter David Salle wrote a brilliant appraisal of the artist and the show in the New York Review of Books earlier this year (click here for the PDF). He writes: "At the beginning of the 1960s, Warhol's work looked new because of a technique new to art—the half-tone silkscreen. It was the ultimate low-to-high inversion...Warhol was the first artist to grasp the potential for pattern and rhythm released by the screen-print process; it could be both mechanical and expressive at the same time." 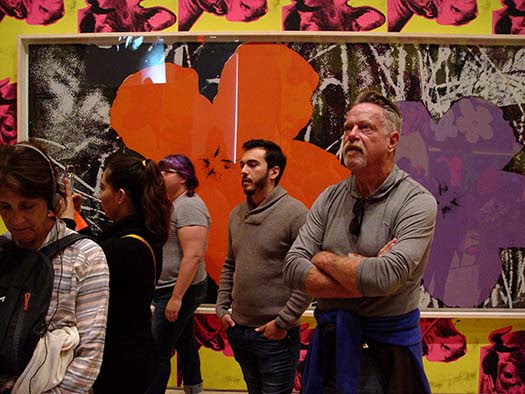 Salle continues: "Perhaps as a result of emphasizing the "artist as a young striver" version of Warhol's life and times (a version he would likely have approved of), the show feels rather light on masterpieces, though it more fully fleshes out how his lifestyle informed his development." 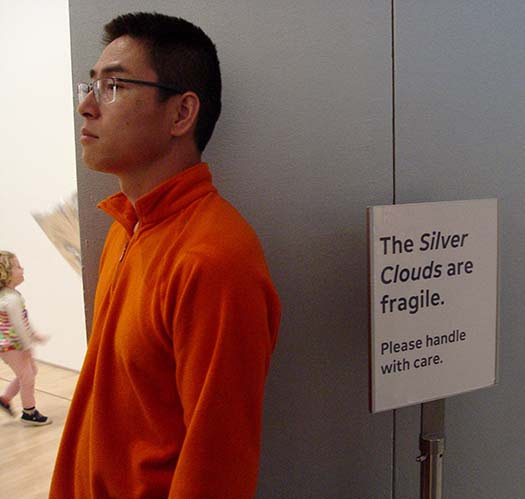 The show itself is fun, whether you are a Warhol fan or not. 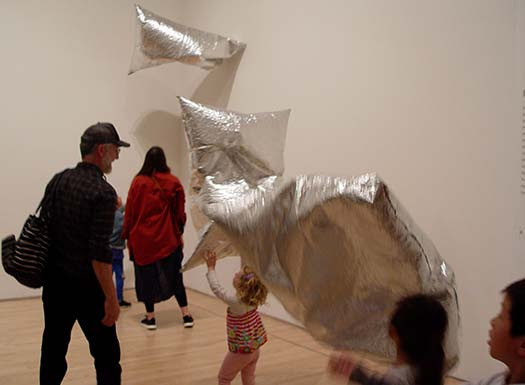 And you don't have to handle the Silver Clouds with care, as you can see. 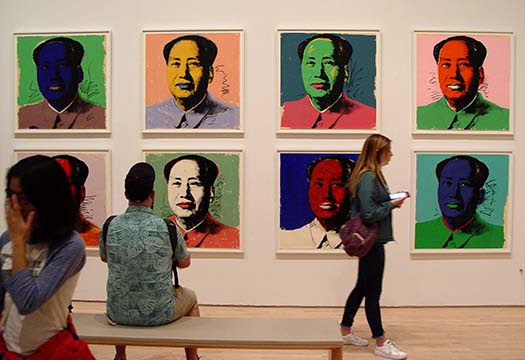 My favorite pieces are the Chairman Mao paintings. 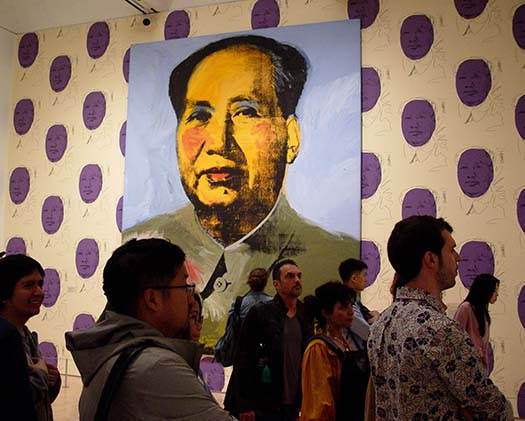 David Salle seems to agree: "I used to think the large portraits of Mao (who was still very much alive in 1972, when Warhol began painting them), with their large blocks of color and brushwork that underlie and surround the Chairman's countenance, were some of the best things that Warhol made." 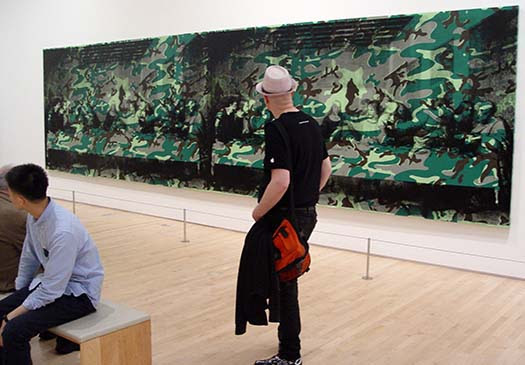 Warhol was a devout Byzantine Catholic from Slovakian immigrant parents in Pittsburgh, and in a fascinating article in a Catholic magazine called Angelus, Mike Aquilina writes: "Scholars note the similarities between Warhol’s art and the traditional Byzantine icons of his childhood. He favored gold backgrounds and flattened human figures. His images of Elizabeth Taylor and Jacqueline Kennedy have been compared to Madonnas. His repeated motifs are like the multiple Hail Marys in the rosary. Like icons, Warhol’s artworks are not historically accurate, but symbolically rich. Where the iconographers used books, birds and buildings, Warhol used product logos. If Christ is Light of the World, Warhol presents him with the logo from General Electric lightbulbs. If the Redeemer embodies divine wisdom, Warhol portrays him with the Wise potato-chip logo. If Christ receives the Holy Spirit as a dove, Andy borrows his dove from a package of soap." The above painting is a camouflage version of The Last Supper. 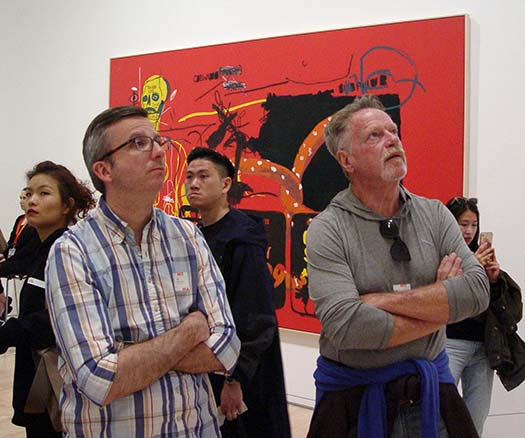 Aquilina further notes: "His religion seems to have left other areas of his life untouched. Some members of his inner circle say that he refrained from sexual contact, but enjoyed watching others having sex — and filming and photographing them while they did. Colacello and others believe he was a sadist-voyeur." 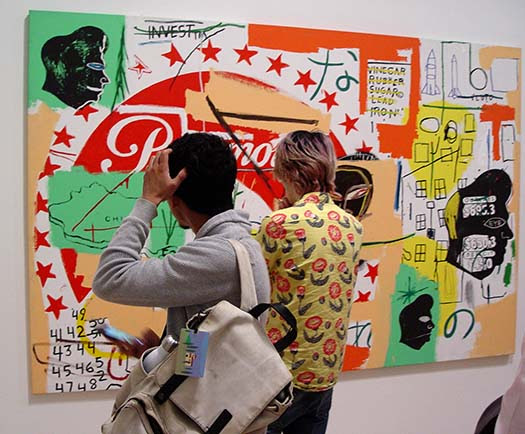 His final years before his early death in 1986 at age 58 involved collaborations with Jean-Michel Basquiat, including the 1984 Paramount above. As Salle writes, "It might be difficult, in this time of critical approbation and market adulation, to grasp just how devalued Warhol had become by the early 1980s, even among his own inner circle...The art historian Barbara Rose had recently begun a review with this zinger: "Andy Warhol has sunk back into the commercial ooze from which he emerged." Let's just say I have always felt ambivalent about the artist and his highly publicized New York Art Scene, wavering between admiration and repulsion, and this retrospective incites both. You should check it out.