"The Pressure" at Other Minds 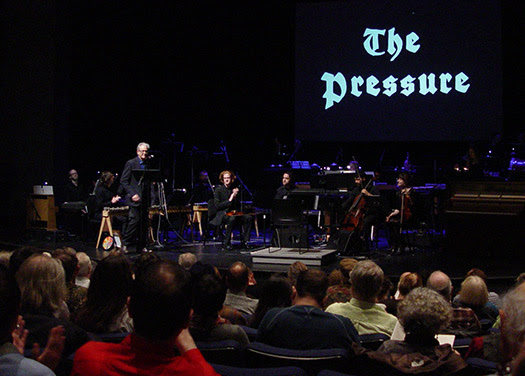 An utterly original work of musical theater, The Pressure, was given its world premiere by the Other Minds Music Festival last Saturday at Yerba Buena Center. 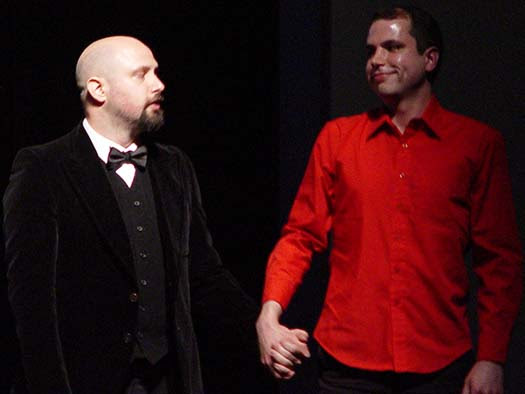 Composed and narrated by Brian Baumbusch (above left) to a poetic horror narrative written by his brother Paul Baumbusch (above right), the 90-minute work was a strange amalgam that was somewhere between an opera and a German Expressionist silent film such as The Cabinet of Dr. Caligari. 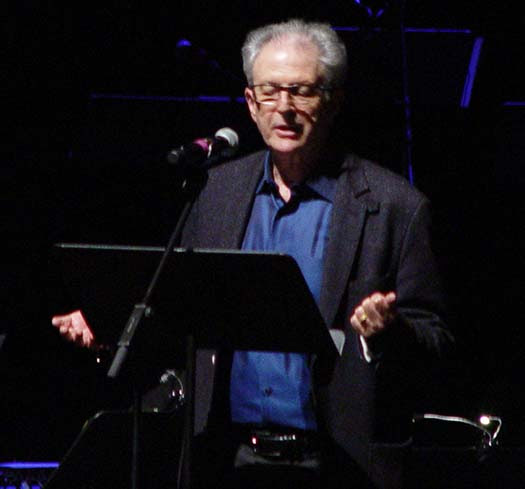 Charles Amirkhanian, the founder of Other Minds, introduced the work in the program as follows: "This year's Other Minds Festival concentrates on the work of two hyper-creative individuals [the other being Ivan Wyschnegradsky] whose performance requirements, like those of other mavericks, including Harry Partch, Conlon Nancarrow, and Lou Harrison, pose challenges that limit opportunities for wide exposure. There is no doubt that Brian Baumbusch is a rare young composer with abundant talent, energy, intellect and charisma to make an exceptional mark in music. His work largely is composed for instruments of his own design, in remarkable tunings and with exacting notational detail...Bringing onto the stage an ensemble of 23 players is, in and of itself, unusual in new music. But to integrate elements of visual art, projections, and movement as well is a daunting challenge." 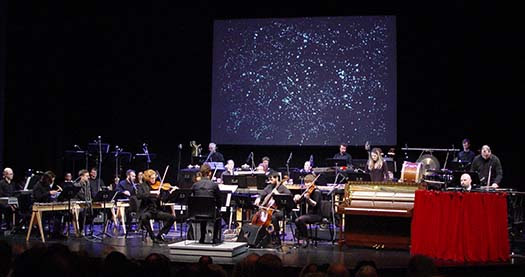 The performing forces were an unusual combination, with the Lightbulb Ensemble playing gamelan instruments built by the composer himself along with more traditional percussion, the Friction Quartet playing as a string quartet and as soloists, a vocal quartet singing everything from faux Bach chorales to Ligeti-like soundscapes, and Margaret Halbig playing an electric Casio organ along with Brett Campbell on a second organ and toy piano. 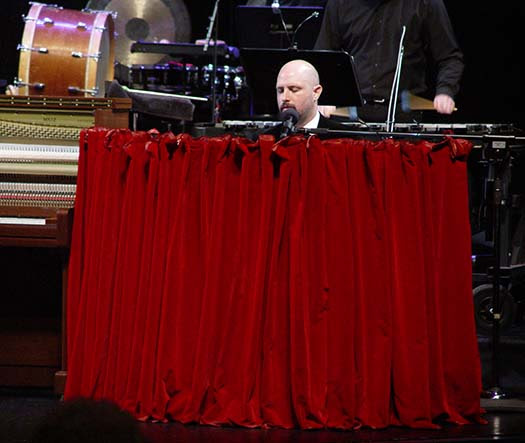 The entire work was anchored by Brian Baumbusch (above) narrating the tale into a microphone over a demented disklavier (player piano). The music throughout was eclectic, haunting, sometimes very beautiful. The libretto was an interesting foray into gothic fairy tales like The Pied Piper, except in this case the traveling Stranger destroys a village through a sinister promise to the inhabitants through gizmos that will protect their apple orchards from monstrously sized hailstorms. 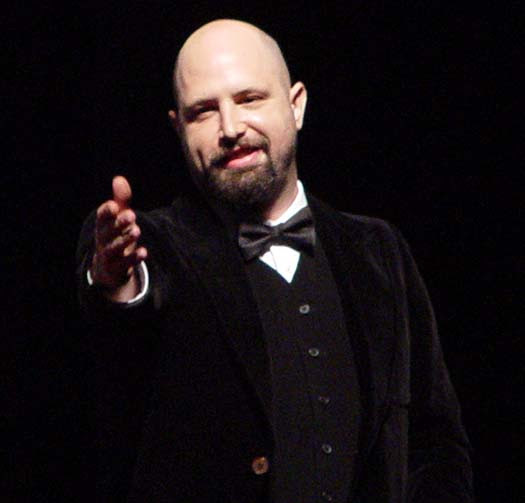 My only serious criticism is that the composer should not have taken on the role of Narrator, mostly because he's not an assured enough actor to pull it off and the overloud amplification of his voice was annoying. A Narrator as good as the surrounding musical performers would have made a huge difference. 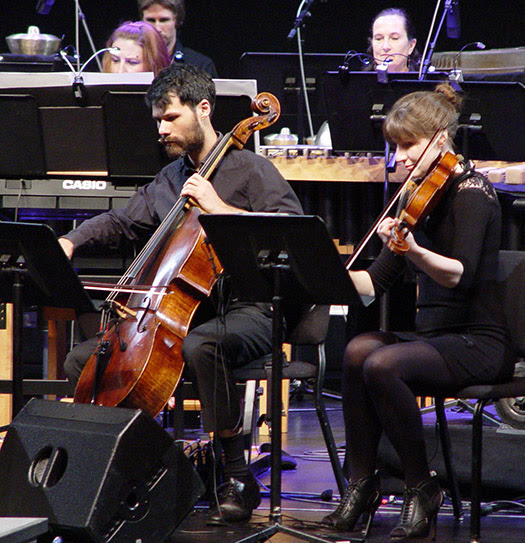 Among the most interesting sections of the work were the instrumental "Night" interludes for various forces, including the always brilliant Friction Quartet that even included a few solo stretches for the individual players. Above is cellist Doug Machiz and violist Tajia Warbelow, who is leaving the quartet after these performances. (Actually, you can catch her and the rest of the performers at the Garden of Memory Solstice concert at Chapel of the Chimes in Oakland this Friday where excerpts from the work will be performed. 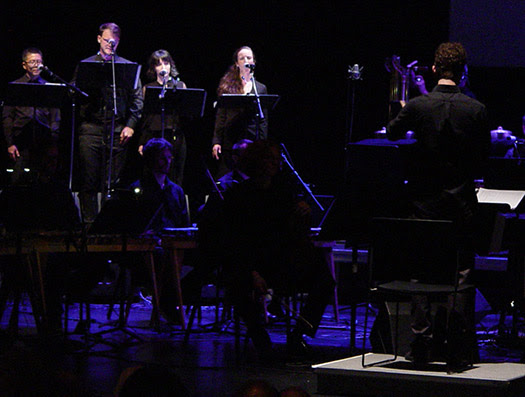 The quartet of vocalists, singing mostly in German for some reason, were soprano Shauna Fallihee, alto Melinda Becker, tenor Ryan Matos, and bass Sidney Chen. They were fabulous in a wide range of musical styles, and so was Nathaniel Berman, the conductor of this huge conglomeration. 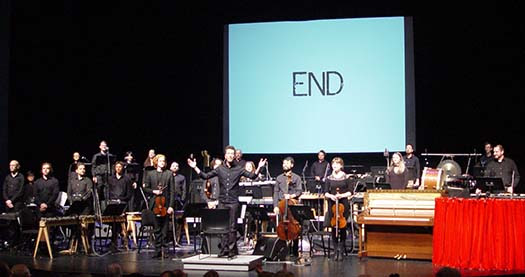 The "multimedia" turned out to be lots of projected black-and-white illustrations by Spanish illustrator Fede Yankelevich that looked a bit like German woodblocks, both specific to the narration rather like a graphic novel while also being abstract. They were evocative without being distracting, a tricky balance. Congratulations to everyone on the ambitious project, especially for passing the new music test of whether I would like to hear it again. The answer is yes.
Posted by Civic Center at 3:37 PM

Thank you. Glad you enjoyed the performance and that you left with a piqued interest to hear it again. If you're interested, you can view the full performance at the link below, carefully edited and mixed. Hopefully the mix is not too annoyingly loud for you... ;) Happy Halloween!