Antony and Cleopatra at SF Opera 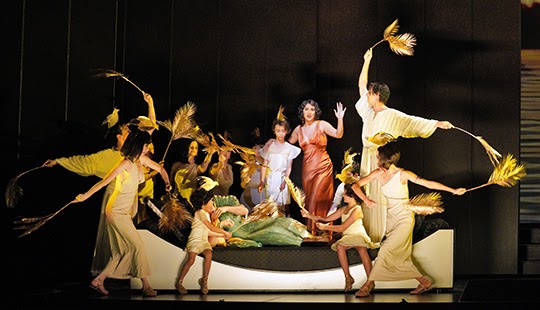 The San Francisco Opera is celebrating its 100th anniversary season with a world premiere adaptation by composer John Adams of Shakespeare's 1607 tragedy, Antony and Cleopatra. Portents of disaster for this momentous event were lurking everywhere: Samuel Barber's 1966 operatic version opened the new Met at Lincoln Center in a lavish, infamously disastrous Franco Zeferrelli production; Adams composed the role of Cleopatra for soprano Julia Bullock who was a late withdrawal due to pregnancy; Adams' last world premiere opera in San Francisco, the 2017 Girls of the Golden West, was widely disparaged though I thought it remarkable; and finally, there is the historical track record of Shakespeare operas over the centuries, which is not good, other than a few exceptions such as Verdi's trio of Otello. Falstaff, and Macbeth, and Benjamin Britten's A Midsummer Night's Dream. So it is wonderful to report that Adams' Antony and Cleopatra is a triumph. (Pictured above is the morning after in Cleopatra's boudoir with a hungover Marc Antony underneath Cleopatra's glittering courtiers. All production photos are by Cory Weaver.) 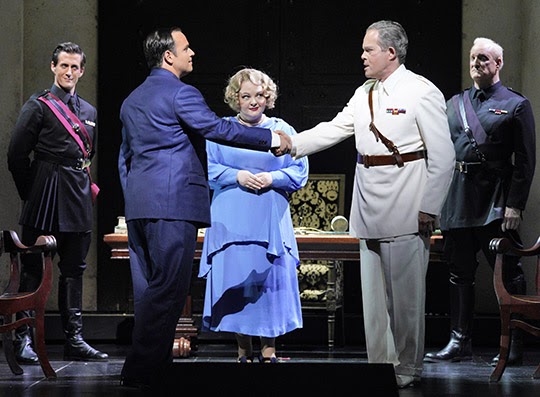 The five-act Shakespeare play flouts the Aristotelian Unities with abandon. Its 42 scenes, 40 characters, and frequent scene changes throughout the Mediterranean mixes politics, battle scenes and the romantic couple at the heart of it all. The adaptation by Adams, with the assistance of stage director Elkhanah Pulitzer and dramaturg Lucia Scheckner, is masterful. It retains the sprawling nature of the play while condensing the characters and battles into a sleek narrative. (Pictured above are baritone Hadleigh Adams as Agrippa, tenor Paul Appleby as Caesar, mezzo-soprano Elizabeth DeShong as Octavia, baritone Gerald Finley as Marc Antony, and bass Philip Skinner as Lepidus.) 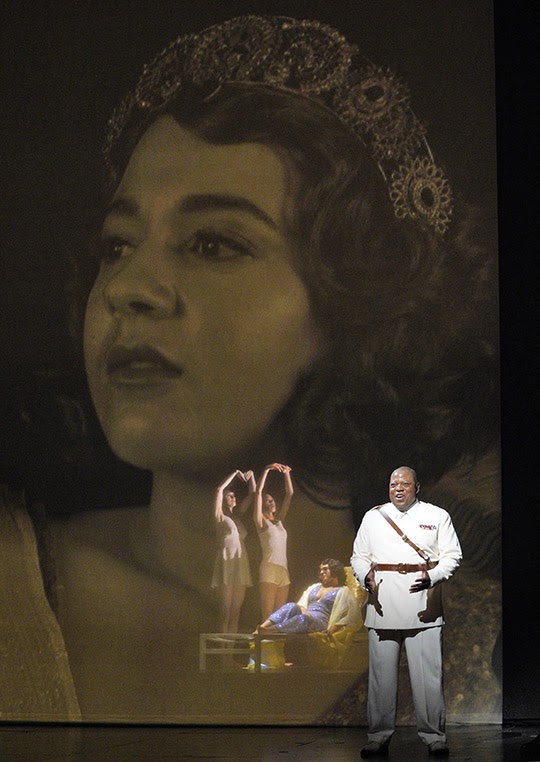 Adams may have written the role of Cleopatra for Julia Bullock, but Amina Edris made the role her own and then some. Born in Egypt and raised in New Zealand, Edris was the first Cleopatra I have ever seen on film or stage who didn't seem ridiculous. (Pictured above is Alred Walker as Enobarbus describing how Cleopatra seduced Antony with "her infinite variety" while floating down the Nile.) 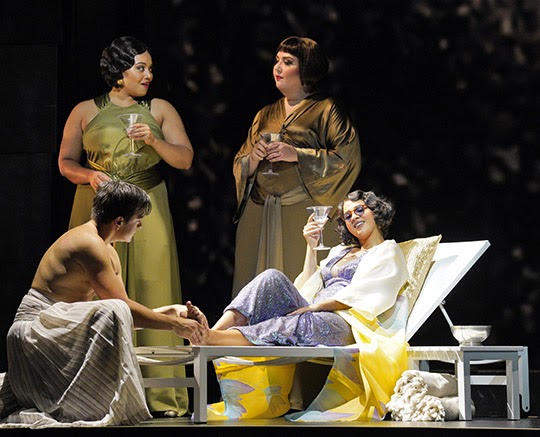 Edris sang Adams' difficult music with confidence, beauty and multiple shadings, making the often unlikable character constantly fascinating. (Pictured above are Edris with her two constant attendants, mezzo-sopranos Taylor Raven as Charmian and Gabrielle Beteag as Iras who join their mistress for a triple suicide in the final scene.)

Choral music has always been an integral part of John Adams's operas over the decades, but in this three-and-a-half hour work there are only two short chorus scenes. The opera instead focuses on intimate drama rather than the epic. This is true of most of the orchestral music too which skittishly plays under Shakespeare's English at understated volumes, except during the uninterrupted scene changes whene the orchestra erupts into compressed symphonic movements. (Pictured above is Gerald Finley surrounded by dispirited mariners in the Battle of Actium scene where all is lost for him.) 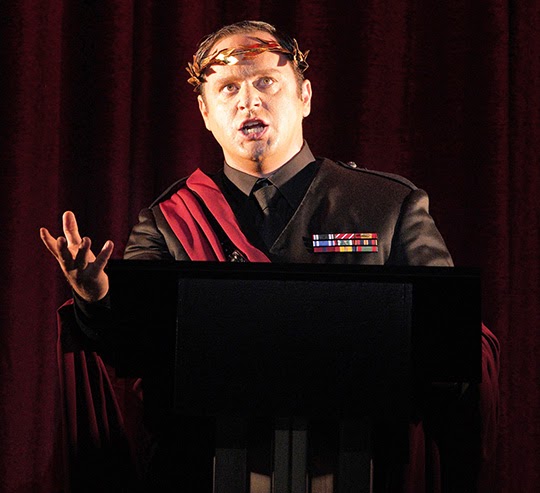 Paul Appleby is very good as a repellent young Caesar, eventually the Roman Empire's first emperor, who comes across as a mixture of a Silicon Valley Master of the Universe and Mussolini. After reading that Pulitzer was staging the opera in the Glamorous Hollywood of the 1930s, I was apprehensive. However, the result was more a design decision, evoking Bertolucci's film The Conformist with its Art Deco Italian Fascism more than Cecil B. DeMille's 1934 Hollywood spectacle with Claudette Colbert. The understated film projections by Bill Morrison also reinforced the Fascist associations, with newsreel films projected onto the full set that included the 1930 marriage of Mussolini's daughter Edda to the fascist propagandist and Foreign Minister Galeazzo Ciano. 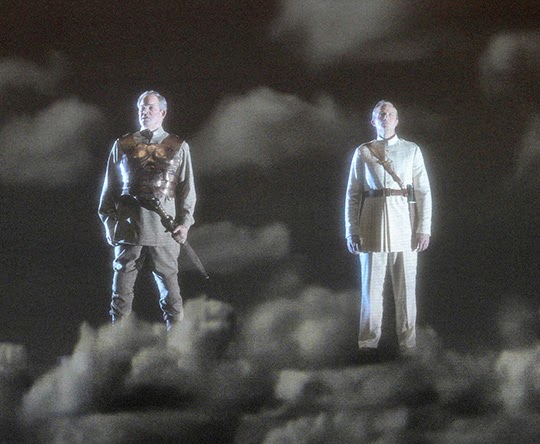 Gerald Finley as the defeated, grizzled old warrior Marc Antony was perfect casting, and his singing throughout was superb. (Pictured above is Marc Antony trying to summon the courage to fall on his own sword in a botched suicide along with his follower Eros, sung beautifully by Brenton Ryan.) 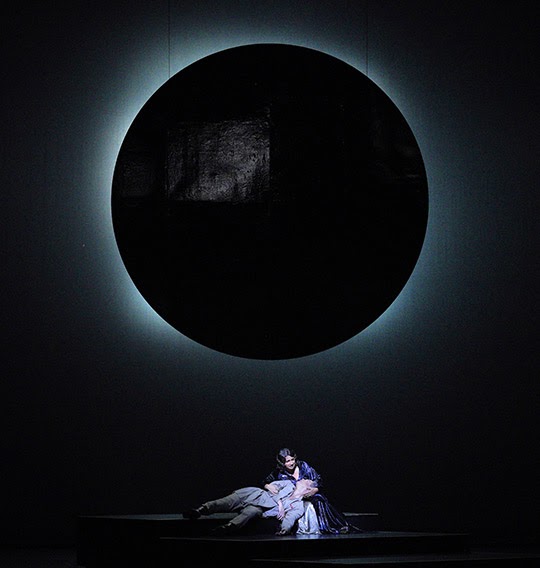 Everyone involved with this production has done some of their best work, from composer Adams, to new Music Director Eun Sun Kim conducting a very tricky orchestral score, to director Pulitzer and her production team, and to the entire, gifted cast of singers. There's not a weak link. It's not a beginner's opera or an easy piece to appreciate, but I believe it's a great work that will have a long life. If you want to brag in the decades to come that you were there for the world premiere, click here for tickets. (Pictured above is Cleopatra holding Antony in her arms as he dies from his self-inflected wounds in a deeply sad, rueful ending focusing on mortality and the death of empires.)
Posted by Civic Center at 1:21 PM