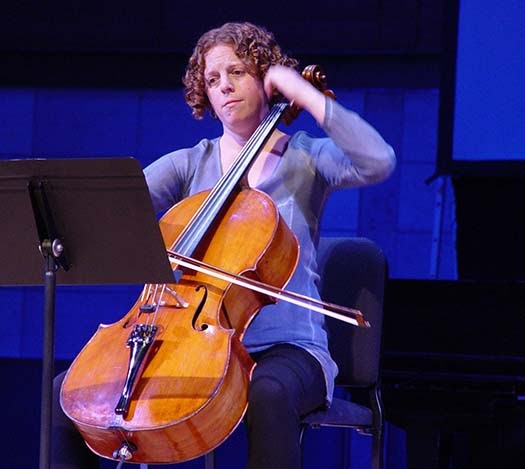 The San Francisco Contemporary Music Players gave an adventurous concert last Friday at the SF Conservatory of Music. It started with the marvelous young cellist, Hannah Addario-Berry, playing Gloria Justen's Flowing-Turning Dance, a piece Hannah commissioned for her 2016 album, Scordatura. It was a lovely opening, a modernist take on a Bach cello suite with overtones of Eastern European folk tunes. 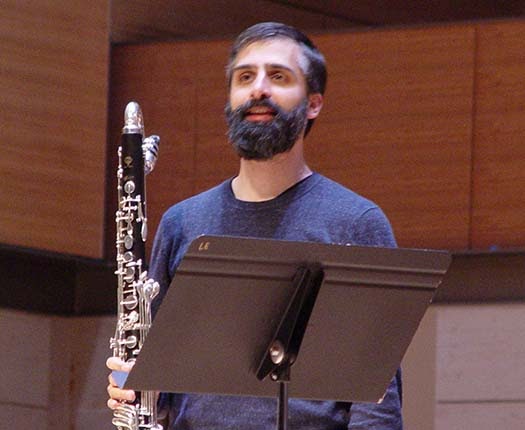 The second piece was the West Coast premiere of David Coll's 2016 Caldera for the weird combination of bass clarinet and marimba, made even odder with the addition of tinfoil to both instruments for strange, scraping effects. Jeff Anderle (pictured above) and Haruka Fujii were the wildly virtuosic soloists, and I really enjoyed the piece, with its soft, scratching opening exploding into both instruments unchained, or at least unmuted with tinfoil.

The first half of the concert ended with Henry Cowell's revolutionary 1935 String Quartet #3 (Mosaic) which has five short movements that can be played and repeated in any order that the players prefer with the proviso that the dance-like fifth movement should finish off the work in a single iteration. Being a huge fan of Cowell in general and his United String Quartet in particular, I was looking forward to hearing this for the first time but the performance was strangely soporific, and I longed for a more energized ensemble with different choices in both the order and repetition of the movements. 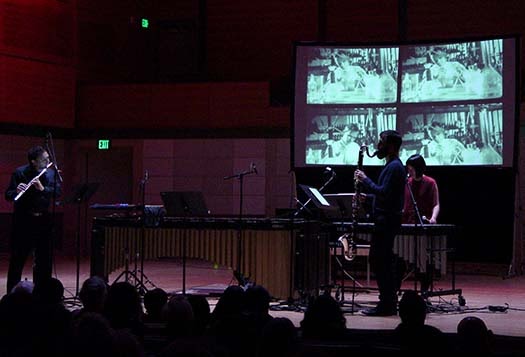 The second half started with Anna Clyne's 2006 Steelworks for bass clarinet, percussion, flute, prerecorded digital track, and a four-screen multimedia display. The 15-minute motoric work was lively and absorbing. In the middle of the piece, the digital track stopped and there was a long pause while they tried to figure out how and where to restart. 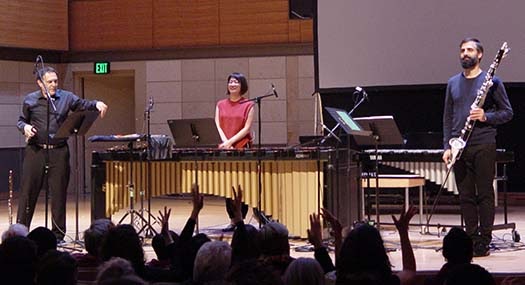 Rather than being a disaster, it felt like a performance that was perfectly consonant with the remainder of the indeterminate program. The fine performers were Tod Brody on flute, the remarkable Haruka Fujii on percussion, and Jeff Anderle on bass clarinet again. 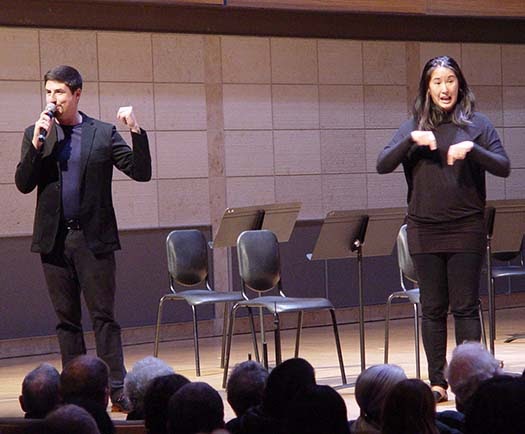 Artistic director Eric Dudley introduced the final piece, a rare performance of John Cage's 1958 Concert for Piano and Orchestra. In the photo above, he is giving an overlong speech to his donor base while flanked by one of the two sign language interpreters for a large sector of the audience which was deaf, attracted to the concert by the appearance of a local dance luminary, Antoine Hunter (photo below), who is also deaf. 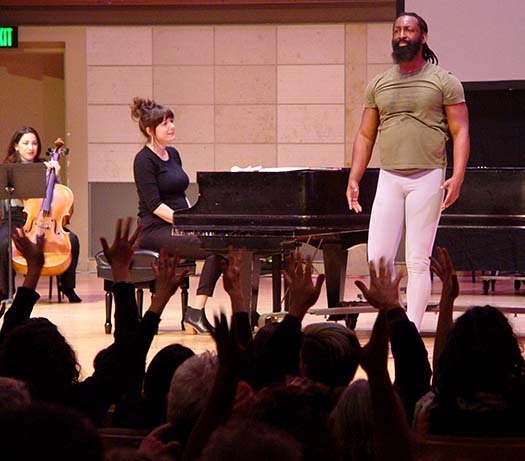 The original performance was a collaboration between two high priests of modernism, the publicly closeted couple of choreographer Merce Cunningham and composer John Cage. The performers, anchored by the pianist Kate Campbell in this performance, play whatever they want whenever they want within certain rigorous guidelines set up by Cage. The score, which was projected above the ensemble, is a series of calligraphic notations that are meant to evoke sounds that are up to the performer. Hunter had choreographed his own dance in between all the performers which didn't have anything to do with the music, but that was part of the point.

Pianist Campbell did a fine job at whatever it was she was playing, and the interjected squawks and sawing from the surrounding instrumentalists was interesting for about five minutes, but I found the 30-minute work nearly interminable. Cage, as usual, has the best words: "“If something is boring after two minutes, try it for four. If still boring, then eight. Then sixteen. Then thirty-two. Eventually one discovers that it is not boring at all.”
Posted by Civic Center at 6:12 PM