In Pursuit of Venus (Infected) 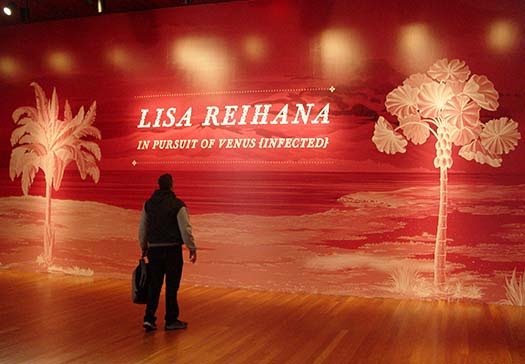 If you get a chance, and particularly if you have an SF Fine Arts Museum membership, make sure you get to the deYoung Museum this weekend for the last two days of a 70-foot mobile mural on the second floor that's a marvel.

For years the museum has displayed a large mural of French wallpaper from the beginning of the 19th century depicting the three Pacific Ocean voyages of Captain Cook. Called Les Sauvages de la Mer Pacifique, translated as Native Peoples of the South Pacific, it's a fanciful depiction that has light-skinned "savages" walking about Eden in classical Roman outfits. 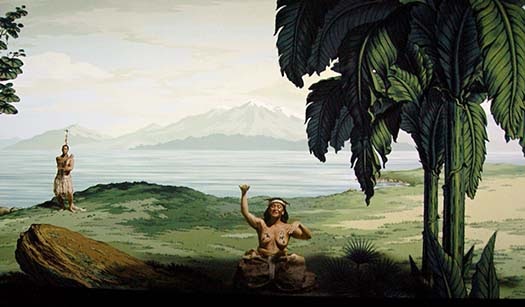 Lisa Reihana has created an historical corrective that is the most amazing mixture of flat, two-dimensional painting and video human actors, both English sailors and South Sea natives played mostly by Maoris from New Zealand. The mural moves right to left so that there are about a half dozen vignettes happening simultaneously before rolling off the screen. 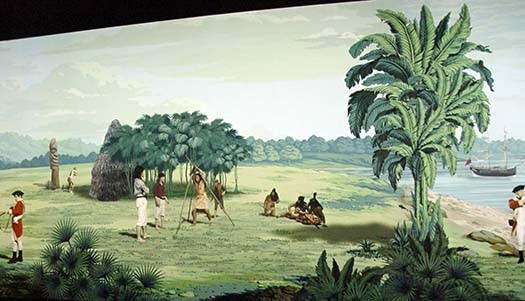 The vignettes range from confrontations to musical and dancing performances to boredom while standing at attention in a full English wool uniform to murder. 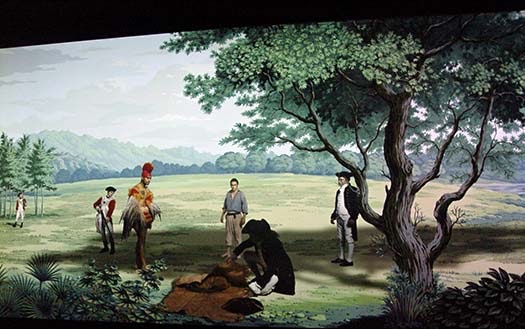 The 32-minute piece is in a constant loop and the details are worth noticing, from the minutely animated ocean waves to a painter dealing with flies as he tries to capture a dead tropical fish on canvas.

Jonathan Curiel at SF Weekly wrote a good essay on the piece recently, which is how I was alerted to the piece. In any case, try to go see the work for yourself, which closes tomorrow, Sunday, January 5th.
Posted by Civic Center at 1:00 PM