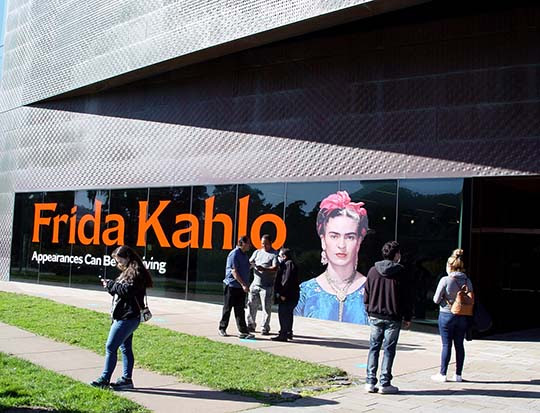 The de Young Museum in Golden Gate Park has recently reopened with a Frida Kahlo exhibit that was scheduled to begin last March before the pandemic shut everything down. The marketing for the exhibit made it sound inconsequential, consisting of associated objects and outfits that Frida wore at her home in Mexico City and her journeys in the 1930s and 1940s to San Francisco. 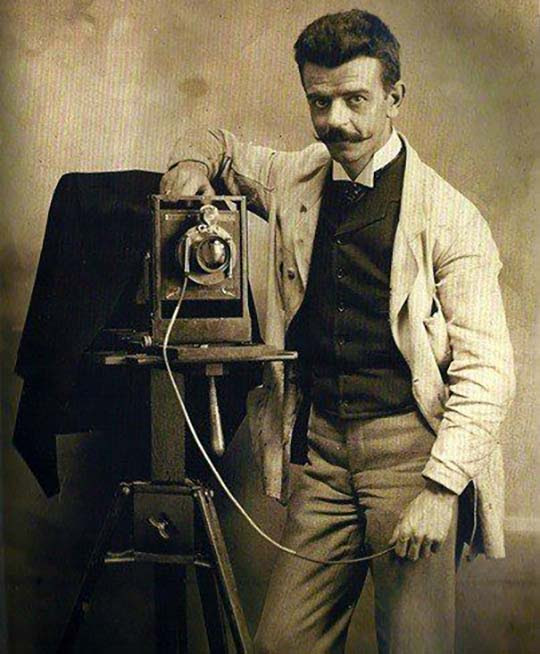 I was afraid the exhibit would be a conglomeration of ridiculous Frida tchotchkes, like the SFMOMA gift shop during their Kahlo exhibit in 2008. However, I am happy to report that the exhibit is surprisingly interesting, with half a dozen famous paintings, quite a few drawings and paintings I had never seen before, and especially a wealth of photography depicting the artistic bohemias of Mexico City and San Francisco in the first half of the 20th century. Guillermo Kahlo, her father pictured above, was a professional photographer and created a number of self-portraits that are striking forerunners of his daughter's surrealistic paintings of herself. 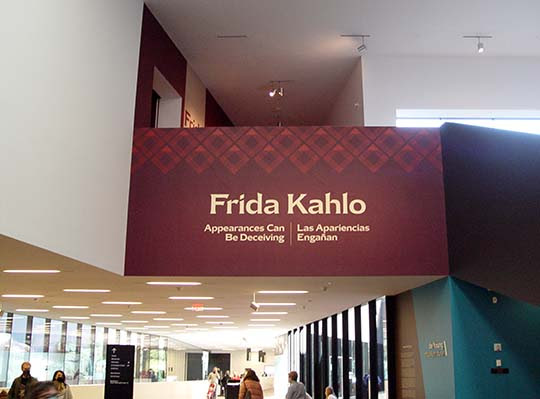 The only problem with the exhibit is that it is installed on the second floor in a series of narrow rooms where it is virtually impossible to safely socially distance. The employees and other patrons were all trying their best, but the architecture defeated all of us, and we did not linger. 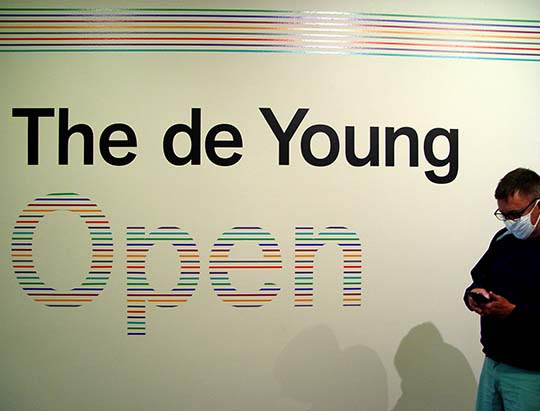 Downstairs in the large basement special exhibit space, the de Young celebrated their 125th anniversary earlier this year with an open call for recent work by artists in the nine Bay Area counties. 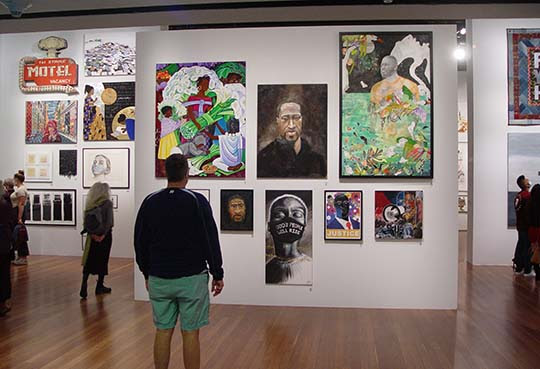 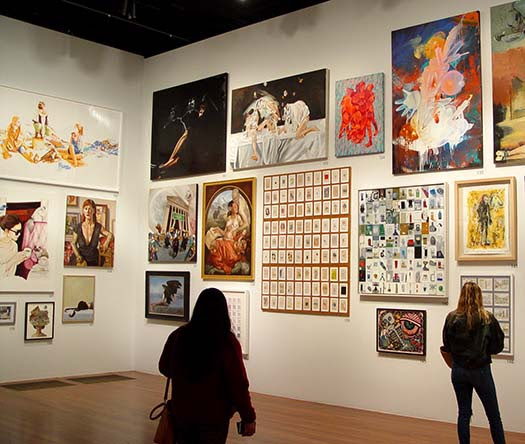 According to their website, "Every artwork image was reviewed anonymously multiple times by a group of qualified jurors who did not know the identities of the artists. The jurors included four Fine Arts Museums of San Francisco curators in charge and three prominent Bay Area artists: Mildred Howard, Hung Liu, and Enrique Chagoya." 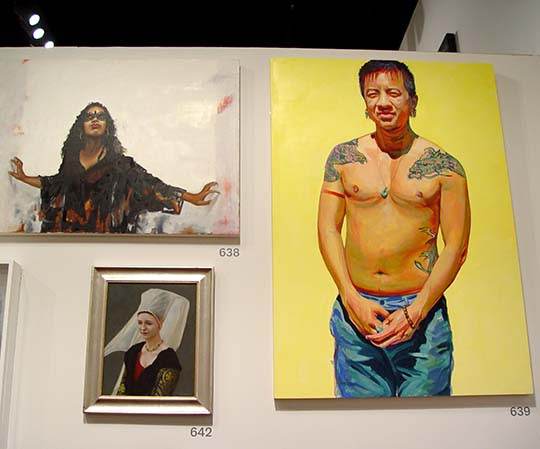 The judges whittled the number down to 877 works by 762 artists, and the winners were hung floor to ceiling in an overwhelming display. 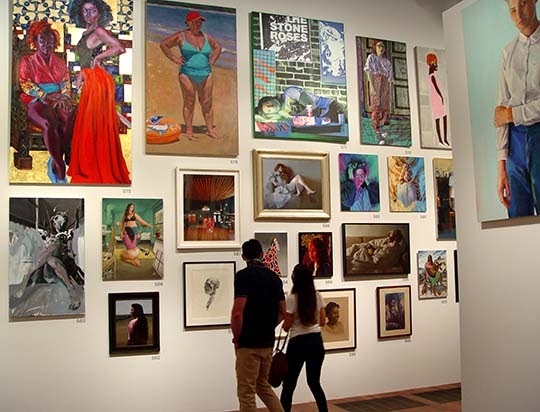 The noisier pieces tend to obliterate the quieter ones, but if you sit on a bench and just study the entire wall, all kinds of odd treasures can be discovered. 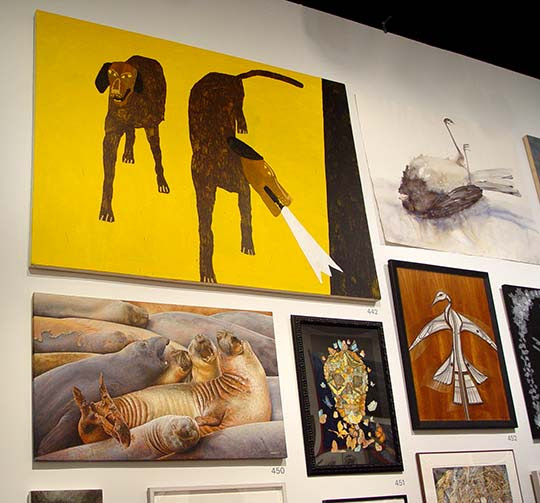 Unfortunately, the space did not feel all that pandemic safe, with too many people trying and failing to stay six feet away from each other. Fortunately, the best way to check out this exhibit is online (click here). The well-designed website is devoted to each of the 877 pieces, along with an artist's bio and a price. Just about everything is for sale, and 100% of the proceeds go to the individual artists, so if you happen to be working and making money, this might be a great way to encourage and support an artist whose work you admire. 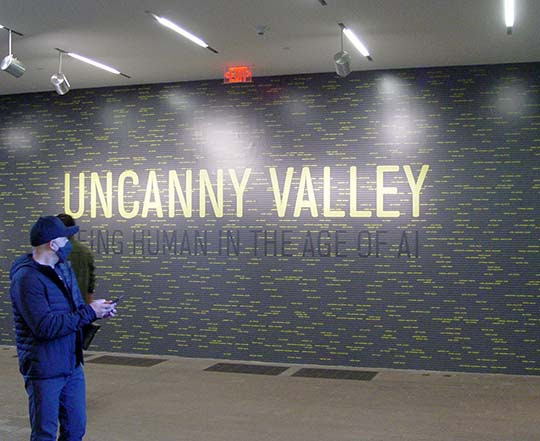 On the first floor, Uncanny Valley consists of a half dozen large rooms with conceptual art devoted to Artificial Intelligence involving lots of wall text, and it can safely be skipped. 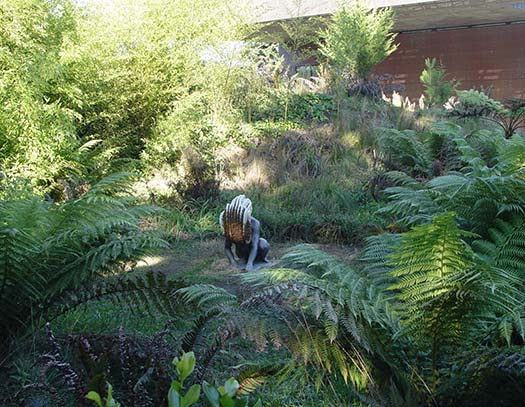 Do seek out Pierre Huyghe’s Exomind (Deep Water), which is also somehow part of Uncanny Valley. 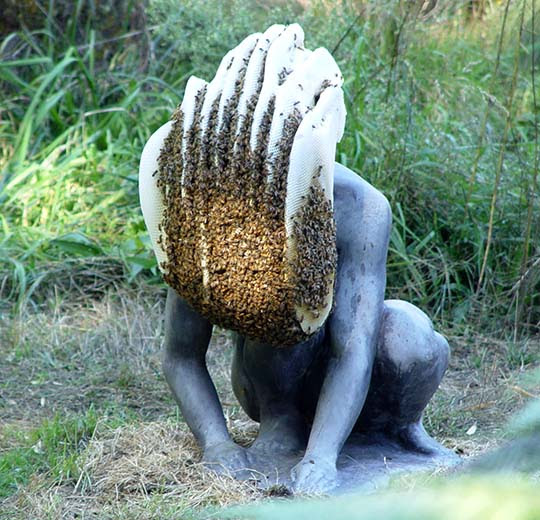 Situated in the eastern sculpture garden outside the museum, it's spooky and fabulous, with a live beehive on top of a naked young woman's head.
Posted by Civic Center at 6:45 PM