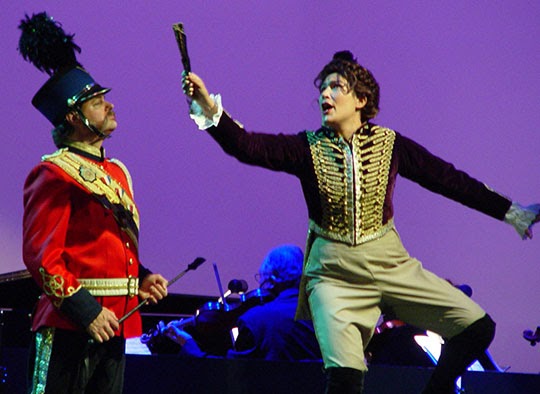 Last month Pocket Opera performed founder Donald Pippin's English translation of Jacques Offenbach's 1867 operetta, The Grand Duchess of Gerolstein. It was the composer's most successful work financially, a satire of mindless militarism and Catherine the Great's penchant for strapping on any handsome man before appointing him to a lofty position. Mezzo-soprano Nikola Printz played the Grand Duchess "who loves the military" and bass Kirk Eichelberger played General Boum, a buffoon who believes in his own military genius. 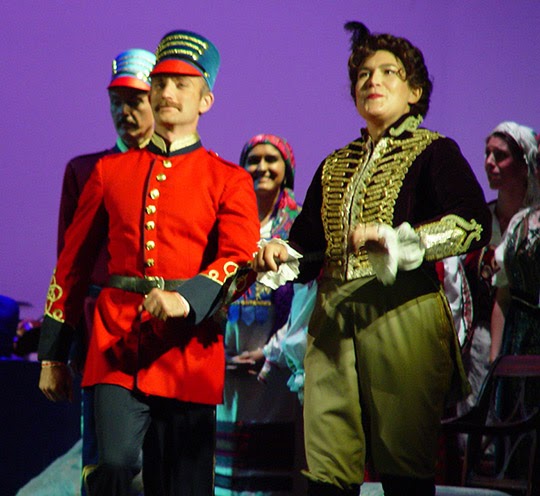 Tenor Chad Somers played Fritz, a simple, low-level, handsome soldier who catches the eye of the Duchess. She promotes him until he outranks the tyrannical General Boum, before going off to war with a neighboring country where he triumphs by getting the opposing army happily drunk and cruelly hungover. 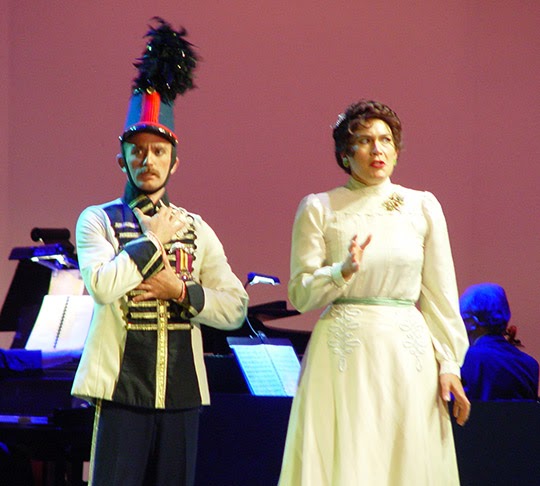 Performed well, farce should have precision, absurdity, and be lighter than air, but the staging by director Bethanie Baeyen felt a bit plodding. Many of the principals appeared to be stranded on their own, which turned out not to be such a bad thing, because the cast was mostly superb. Chad Somers's sweetly stupid soldier was delightful with one brilliant deadpan reaction after another, and Nikola Printz looked great and was in beautiful voice. 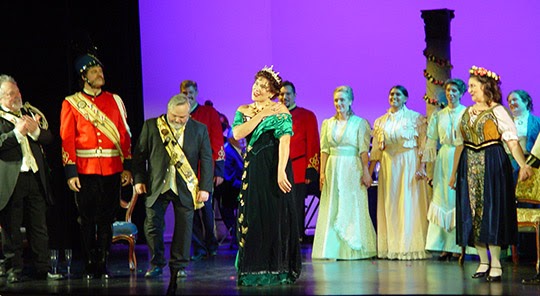 Michael Mendelsohn as the Duchess's would-be fiance Prince Paul, Kirk Eichelberger as the idiotic General Boum, and Joseph Meyers as the scheming Baron Puck were all very fine. Their patter songs are direct forerunners to Gilbert & Sullivan and the fun, frothy music is the father of Viennese operetta. 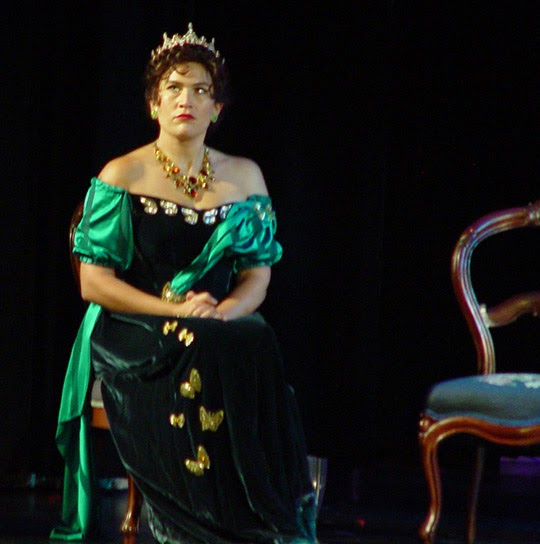 The work was written to coincide with the Paris Exhibition of 1867, when the city was filled with tourists, and royalty from all of Europe jammed the small theater to see the satirical take on their own world. Bismarck, the Prussian Prime Minister, was reported to have said of the military satire: "C'est tout-à-fait ça!" (That's exactly how it is!)". Three years later, the Franco-Prussian War of 1870 broke out, and the operetta was banned in France for a number of years afterwards for its antimilitarism, and on account of Offenbach's confusing identity as a German-Jewish-Frenchman. The piece has managed to hold the stage ever since, though, because the music is so good and the libretto is genuinely witty. I saw the work at the San Francisco Opera House with Regine Crespin in the early 1980s, but it works better in a small house like the Gunn Theater at the Legion of Honor Museum. 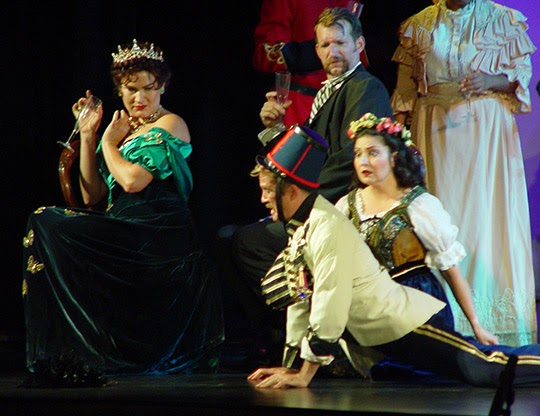 The ending has an oddly dark twist, where poor Fritz (Somers) is stripped of all his medals after being violently pummeled in a nasty trap set by all the upper-class characters. Meanwhile, the Duchess (Printz) has moved on and is trying to hook up with tall, handsome Baron Grog (an amusing Chris Langton). In some kind of happy ending, Fritz's peasant fiance Wanda (Chelsea Hollow) finally gets to drag her man back to their village, away from the stupidity of armies and royalty.
Posted by Civic Center at 2:58 PM