Oedipus Rex at the SF Symphony 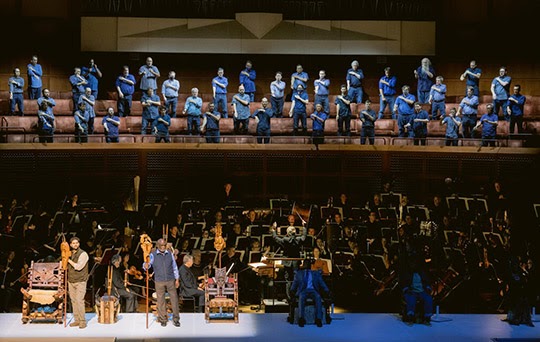 The San Francisco Symphony and Chorus, conducted by Music Director Esa-Pekka Salonen, offered staged performances last week of Stravinsky's Oedipus Rex and Symphony of Psalms, bundled together in a high concept production by Peter Sellars. The reactions from critics and Facebook "Friends" has ranged from ecstatic to horrified "cover your eyes and just listen to the music" warnings. Stravinsky's hour-long 1927 opera-oratorio Oedipux Rex is a strange bird. The composer wanted a dry, monumental, unemotional version of the famous tale, so he commissioned Jean Cocteau to write a stripped-down libretto and then had it translated into Latin, while suggesting that all the performers wear masks for maximum alienation. At the same time, Stravinsky composed deeply expressive music for his principals and a large male chorus. (All production photos are by Kristen Loken.) 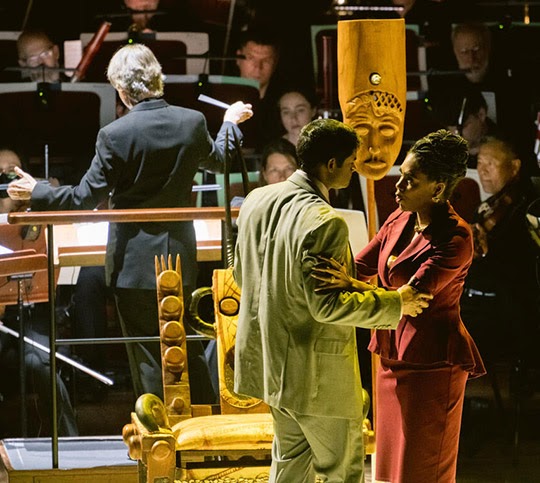 Sellars made the staging as immediate and communicative as possible, rewriting the original text's terse narration with a passionate, lengthy recounting of the plot along with snatches of Sophocles. This was delivered by actress Breezy Leigh playing Oedipus's daughter Antigone that included uncomfortably contemporary references to living in a cursed Plague Time. The soloists threw themselves into the production with fervor, including tenor Sean Panikkar as Oedipus and the gorgeously imperious mezzo-soprano J'Nai Bridges as Jocasta, his incestuous mother/wife. 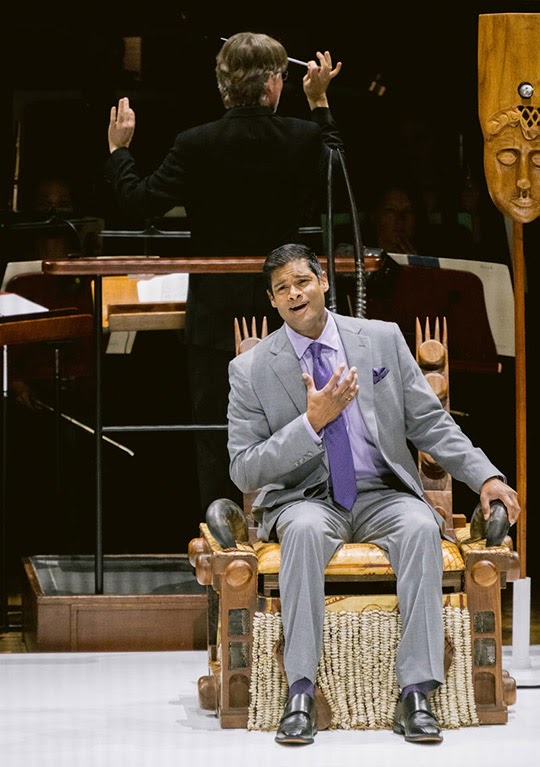 Sean Panikkar was in San Francisco Opera's training program in 2005-2006, and I wrote about him then while reviewing a production of Puccini's Manon Lescaut: "The first act also had to contend with the Sean Panikkar effect. He's a young Sri Lankan in the Adler Fellows program who keeps being given tiny parts that are usually the companion, the friend, the herald, what have you, and the problem is that his voice is so youthful, lyrical and beautiful, that the star tenor's entrace is usually a disappointment in comparison. This happened last year in both Norma and Maid of Orleans." Then he seemed to disappear until his name kept popping up recently in ecstatic reviews of Philip Glass's Satyagraha at the English National Opera and other opera companies where he sang the lead. In any case, it was wonderful to see him in a major role in San Francisco again, sounding great and mysteriously looking as if he had not aged a day in 20 years. 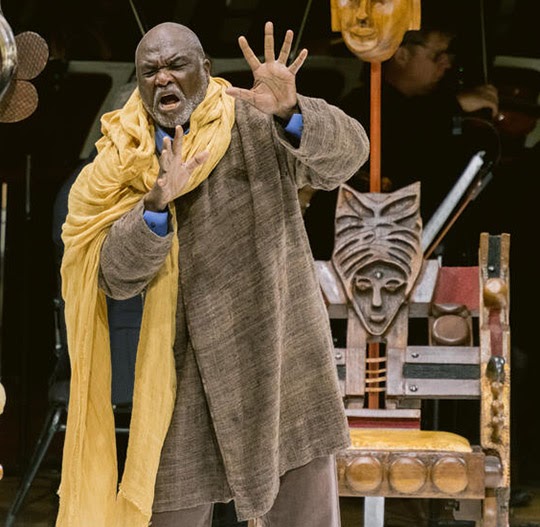 The real star of Oedipus Rex is the mens' chorus, which has a large share of the music. In this production, they were required to memorize the entire piece so they could perform a series of physical gestures while singing, a Peter Sellars specialty. In unision, they raised their arms, clutched their hearts, stood with outstretched hands, and indulged in all kinds of expressive movement, which many people found silly and distracting, but I thought it worked well, especially since it was a bit ragged rather than perfectly synchronized. The SF Symphony Chorus has been through a rough time, having lost their longtime Chorus Director Ragnar Bohlin last year when he went insane and became a public anti-vaxxer at the onset of the COVID pandemic. Everyone liked Bohlin and he did a great job in that position for over a decade, so his flying off the rails and back to Sweden was even sadder and stranger. The SF Symphony has done an extraordinary job over the last season dealing with public performances during the pandemic, starting with an all-strings concert for a vaxxed and masked audience, and slowly adding more instruments to the ensemble until the full orchestra finally emerged. The chorus was the last, most dangerous addition, and after a Beethoven Ninth Symphony appearance and a Carmina Burana without the orchestra, they finally had a chance to shine after two years in exile. 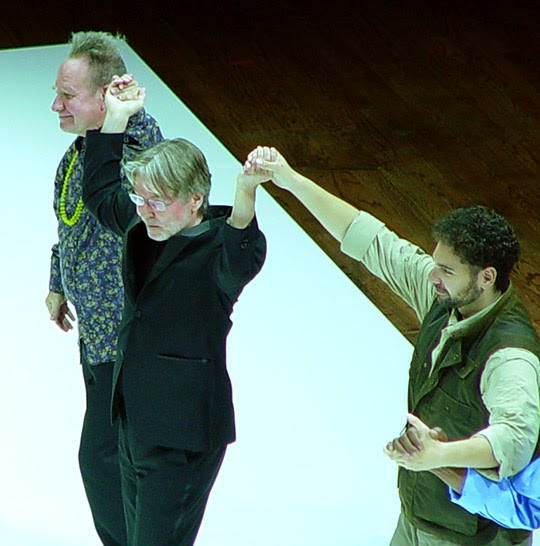 Director Peter Sellars (above left) and conductor Esa-Pekka Salonen (above center) have worked together for decades and premiered an earlier version of this production in 2009 as Salonen conducted his final concerts as Music Director of the LA Philharmonic. Picking up where they left off, Sellars and Salonen are planning at least four more staged productions for San Francisco in the coming years. Also pictured above is Jose Simerilla Romero in the small role of the Shepherd, mirroring the young Sean Panikkar Effect with his sweet, pure tenor. 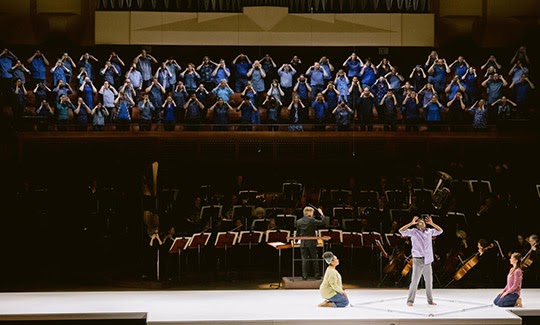 This was the first theatrically successful production of Oedipus Rex I have ever seen live, but the production fell apart for me after intermission where Stravinsky's 1930 Symphony of Psalms was preceded by Breezy Leigh relating the plot of Sophocles's sequel, Oedipus at Colonus. Maybe this worked when the great actress Viola Davis essayed this role in 2009 Los Angeles, but Ms. Leigh just seemed to drone on and on for what seemed an eternity. A pantomime ensued with the dying Oedipus accompanied by daughters Antigone and Ismene (the mute dancer Laurel Jenkins) while the full male-and-female chorus sang the ethereally beautiful music in exquisite fashion (full props to Guest Choral Director Andrew Whitfield). This is where I joined the haters and closed my eyes, letting the final "Alleluia" take us all to heaven without visual interference.
Posted by Civic Center at 11:40 AM