East-West Fusion at the SF Symphony 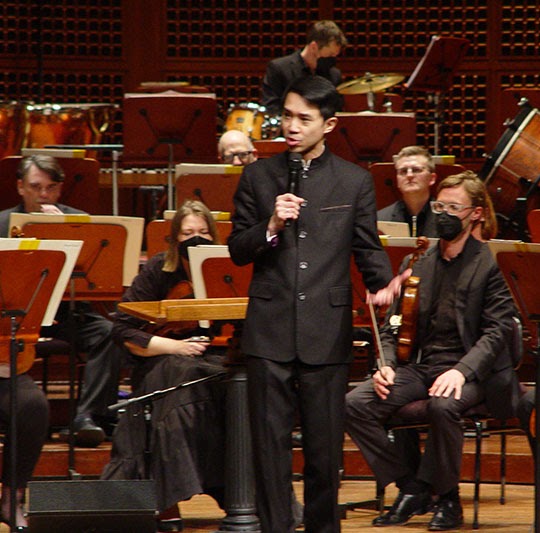 The San Francisco Symphony offered truly adventurous programming last weekend without much fanfare, and the result was stimulating and heartening. Four living Asian composers writing in a Western classical idiom had their SF Symphony debuts, with works ranging from the inconsequential to the deeply rapturous. The Hong Kong-born, Yale-educated conductor Perry So explained that the fusion of Eastern and Western musical pieces is such a rich, mostly undiscovered trove of music that they could have programmed ten concerts with other works. The concert started inauspiciously with the 2014 Bounce!!, a seven-minute curtain raiser by Korean-born, Yale-educated Texu Kim, who was also the baby of the bunch at age 41. It was a dry musical interpretation of basketball that did not contain enough of its own title. 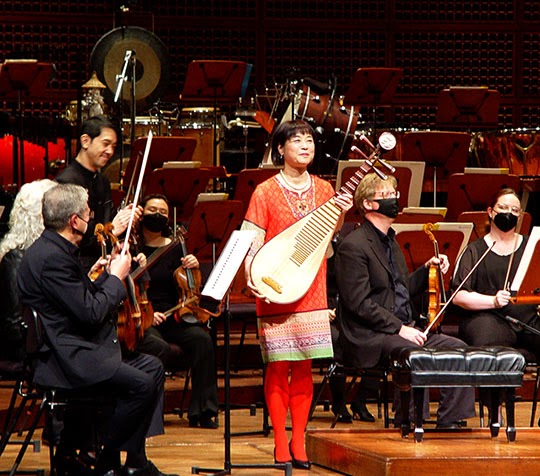 The fifth composer was the only gringo, the late Lou Harrison, the original West Coast gay hippie musical genius who forged a path all his own in the fusion of Western and Eastern musical styles. Harrison's music was less cultural appropriation and more in the nature of alchemy. The reverbations from his deeply original work are still being discovered, so it felt momentous to be hearing the SF Symphony debut of his 1997 Concerto for Pipa and String Orchestra performed by Wu Man, for whom it was written. 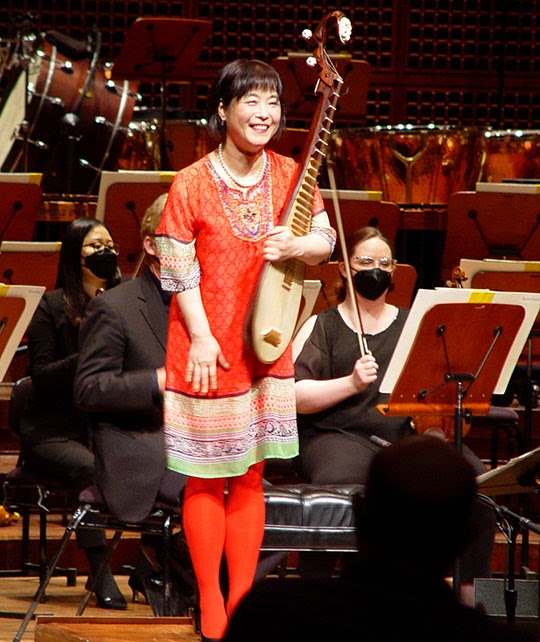 Though Wu Man has often performed in the Bay Area on the pipa, an ancient Chinese lute-like instrument, with the Kronos Quartet and the Silk Road Ensemble, I had never seen her before and it was a bit like seeing Segovia play the guitar. She is a legend who has extended the role of her musical instrument's history, and who also lives up to the hype as a charismatic performer. Harrison's concerto is similar to his 1973 Suite for Violin and American Gamelan where a concerto structure fractures into shorter movements that add up to their own sort of dance suite logic. The backing for the pipa is not the "American Gamelan," but a small string orchestra where the pipa alternately sounds like a mandolin, a banjo, a drum, and a lute while the strings venture into all kinds of alternate tonalities. The piece and the performance were exquisite, and it's surprising that it took 25 years to hear it performed for the first time at Davies Hall.

After intermission, a large orchestra played the 1987 NIM by Younghi Pagh-Paan, a Korean immigrant living in Germany. Her relentlessly loud, fierce 20-minute work takes its inspiration from a poem by Mun Byung-Lan about the earth. She writes: "The lyrics of this poem made a deep impression on me. The metaphors of the abused, tortured, and trodden soil clung to me." NIM was sort of frightening, so it was a relief to continue with The Age of Birds, a lushly gorgeous three-movement work from 1986 by Japanese composer Takashi Yoshimatsu. Recognizable bird calls and the sound of flocks flying are embedded in a score that sounds like a Japanese take on Respighi's The Pines of Rome, except this would be The Birds of Tokyo. The work could easily become part of the popular classical repertory, and again, it was surprising that this was its SF Symphony debut. 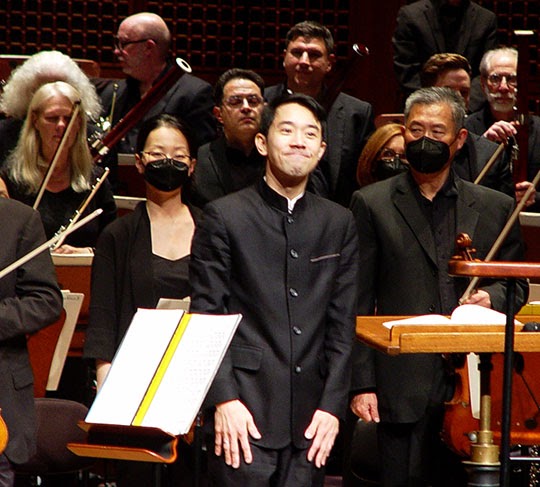 The final work was The Rhyme of Taigu, a 2003 concerto for percussion and orchestra by Zhou Long, a Chinese immigrant to the United States who won the 2010 Pulitzer Prize for his opera Madame White Snake, which is scheduled to be co-produced by the San Francisco Opera in the next few seasons. The fun, lightweight piece was dedicated to Japanese taiko drumming, yet another cross-cultural fusion. The superb performances by the orchestra, playing all this new music for the first time, is a testament to conductor Perry So. Please bring him back to conduct anything he desires.
Posted by Civic Center at 4:33 PM

I have seen nothing about Madame White Snake at SF Opera. 2022-23 has two new works, by John Adams and Gabriela Lena Frank. 2023-24 has new operas by Kaija Saariaho, Mason Bates, and Rhiannon Giddens. I'm curious about your source for this!

Dear Lisa: You're probably right about the date, but this is what was printed in the SF Symphony program notes about the composer: "Zhou's opera Madame White Snake will be co-produced by Paris's Opera Comique, Beijing Music Festival, and San Francisco Opera in 2022."

That is excellent spotting. I will ask about this.