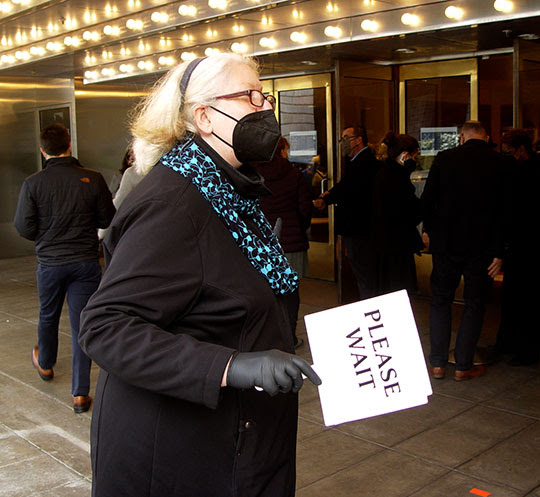 The San Francisco Symphony reopened Davies Hall for concerts last week, with attendance limited to audiences who showed proof of a negative COVID test or full vaccination two weeks after their last shot. 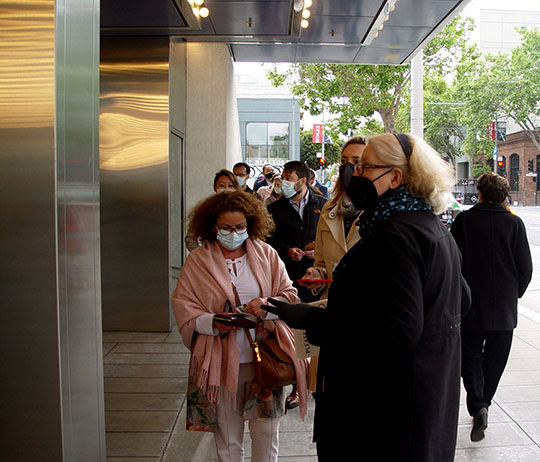 The entrance process was smoother than anticipated for the 50% capacity audience, all wearing masks. 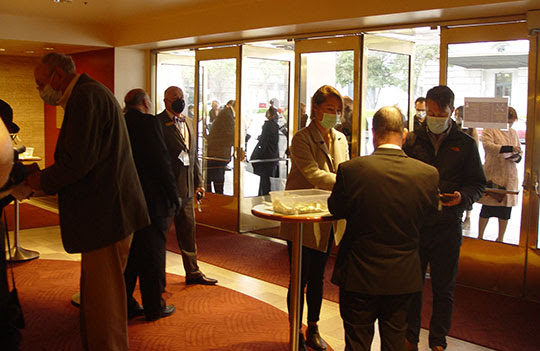 A small army of ushers directed people to stations in the lobby where ID and vaccination cards were checked, colored wristbands issued to identify your seating area, and tickets scanned either from patrons' paper printouts or their mobile phones. 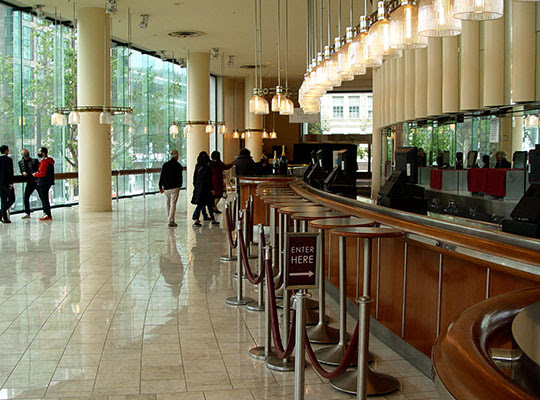 These concerts were planned before the fortuitous announcement this week from the CDC that the COVID vaccines have been working, and that masks are no longer necessary if you're in an all-vaccinated group. 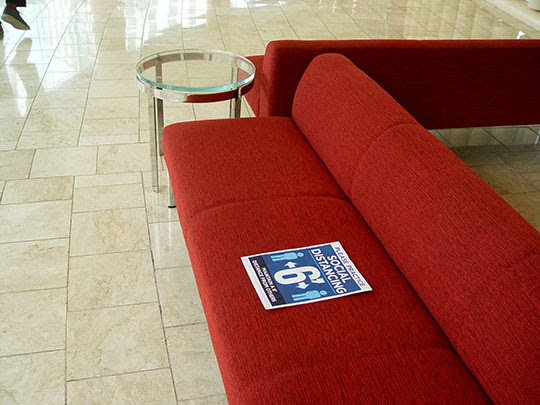 There are absurdities such as 6' distance signage in the lobby... 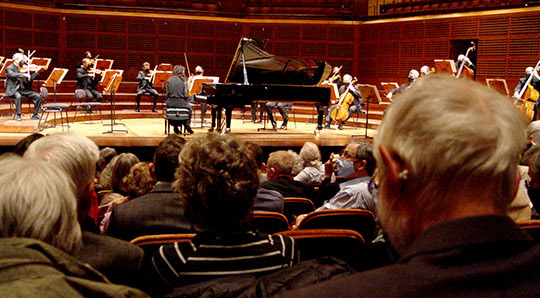 ...when the audience at the front of the orchestra section was seated shoulder to shoulder. 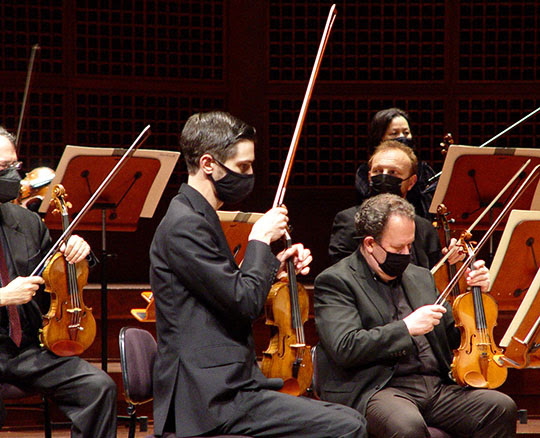 The concerts have been shortened to an intermissionless 75 minutes, and because breath-emitting instruments and voices are still considered high-risk for airborne spread, the orchestra has been truncated to mostly strings, each player with their own music stand and distanced from fellow players. 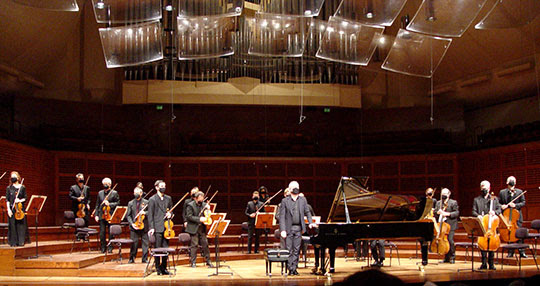 What was truly gratifying was the quality of the concert itself, led by the pianist Jeremy Denk from the keyboard, and the total absence of a persistent concertgoing annoyance. During the entire 75 minutes, I did not hear a single cough from the audience. It felt like a miracle, and is proof positive that masks allay a whole host of communicable, airborne diseases like flu and the common cold. 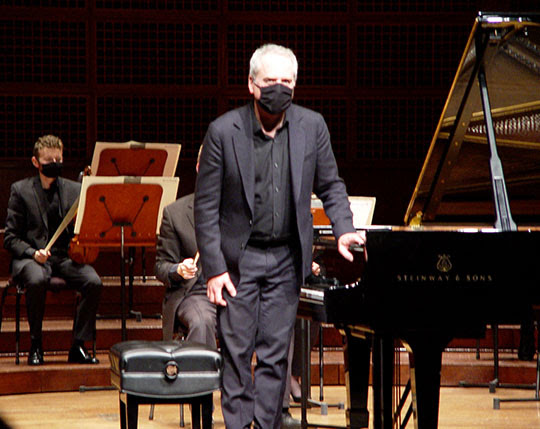 Denk is not only a fine musician, but a superb writer as well, which was reflected in his short, informative, and witty introductions to the pieces he played. "One of the silver linings of the pandemic," he noted, "is discovering music and composers that I had never heard of before, such as William Grant Still." The American composer's 1939 Out of the Silence was a dreamy, impressionistic, jazzy miniature for piano and strings that made me want to hear more of his music. 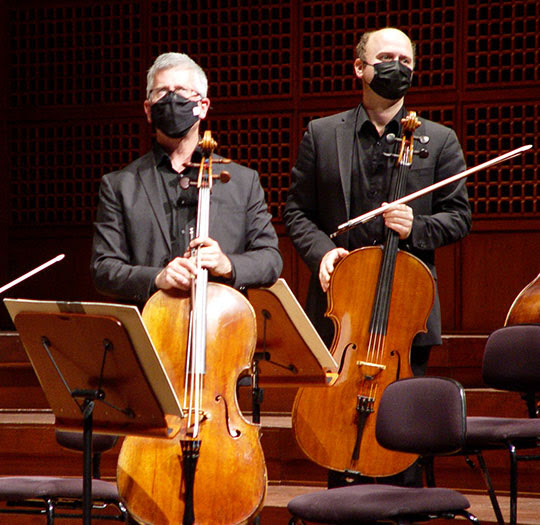 Denk introduced the next work, J.S. Bach's Keyboard Concerto No. 1 in D minor with "And now we leave that opium den to a work that couldn't be more different, with moments where Bach is almost demonic." He noted at the beginning of the concert that the orchestra was playing as a chamber ensemble without a standup conductor which required incredible listening powers from everyone, and the communal effort had a rawness that energized the music. After hearing enough original instrument ensembles like the Philharmonia Baroque and the American Bach Soloists, I've become accustomed and prefer a harpsichord for Bach, but in a large symphony hall like Davies, the piano worked well, especially in Denk's committed performance. 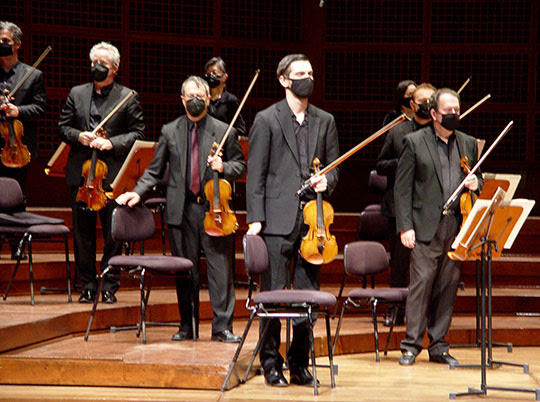 The third piece was another rarity, the slow, sweet Eclogue for Piano and Orchestra by the 20th century British composer Gerald Finzi. 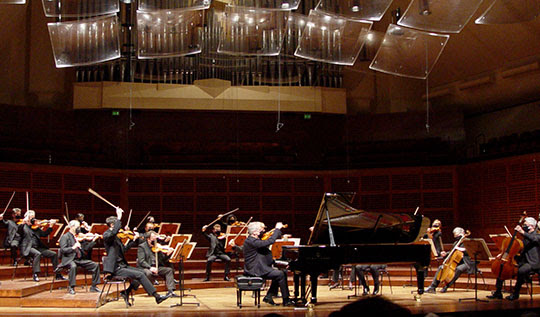 The final work was Mozart's Piano Concerto No. 14 in E-flat major, which was my introduction to the composer at the age of 13, and its exquistely beautiful slow movement still gives me shivers. Denk is a great Mozartean pianist, and it was a joy hearing him with this music. 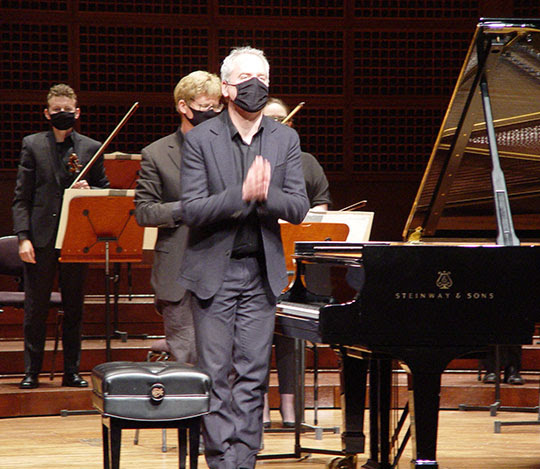 Denk also performed an outrageously entertaining encore, the stride pianist Donald Lambert's jazz reworking of the Pilgrim's Chorus from Tannhäuser. "I apologize in advance to any Wagner fans out there," he told us. (Click here for a YouTube rendition of Lambert playing the piece himself.) There are a half dozen more concerts in this series, every Thursday and Friday evening at 7:00 PM. Click here for the calendar.
Posted by Civic Center at 1:49 PM

My only wish was that Dent had said a few words before the Finzi Eclogue, which was the one piece I really came to hear.

As often as I've heard the Bach, this was the first time I'd heard it with piano, and what struck me the most was that Dent made excellent use of the piano's dynamics. On a harpsichord, all notes have equal volume, but Dent was able to play the "filler" notes more quietly, in addition to bringing the entire sound down when the orchestra had more "important" notes. Sometimes less is more.

I was sort of glad to discover the Finzi Eclogue without an intro because I had forgotten the program and had no idea what I was listening to while hearing it. Just knew that it was strangely, unearthly beautiful.