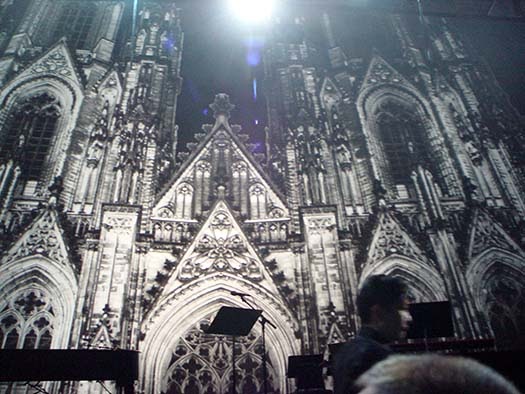 It was In Search of the Sacred at Davies Hall last weekend, with the composer Missy Mazzoli curating the SoundBox nightclub in a program called Modern Sanctuary and conductor Herbert Blomstedt offering Beethoven and Brahms in the main hall with a performance that felt infused by the deities. 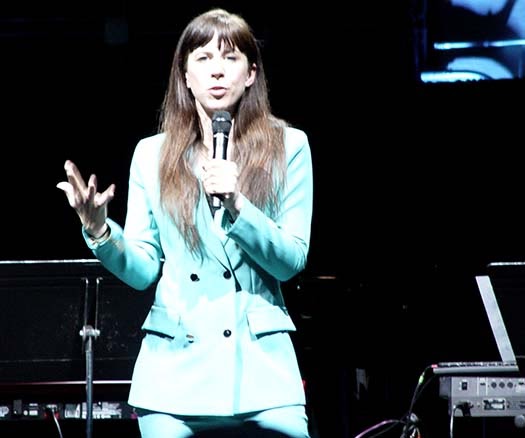 Missy Mazzoli is a 39-year-old East Coast composer who is writing some of the most interesting theatrical music in the world right now, capped by her three operas from the last decade, Songs from the Uproar, Breaking The Waves, and Proving Up. Four years ago I saw another show she curated at Le Poisson Rouge, the hipster basement speakeasy in Greenwich Village, where I thought, "I wish she had curated more of her own music and left the arias from Faust and Peter Grimes sung by overmatched young singers out of the program." 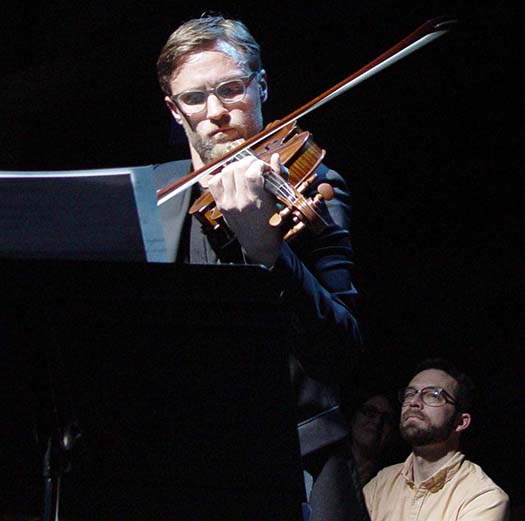 At her disposal in SoundBox were some of the best musicians in the world, such as principal SF Symphony Violist Jonathan Vinocour playing Mario Balter's mesmeric, extended technique Ut. 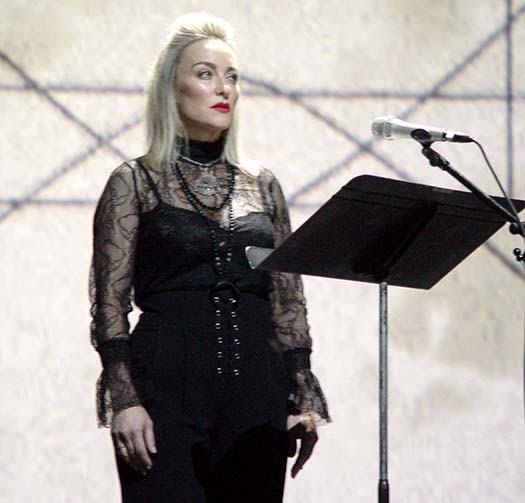 There was also soprano Marnie Breckenridge, looking and sounding exquisite, vocalising with composer Mario Diaz de Leon on his Sanctuary.

This was followed by Missy Mazzoli, Lorna Dune, and Marnie Breckenridge performing a piece from Mazzoli's Vespers for a New Dark Age, followed by Meredith Monk's Passage and What Does It Mean?. 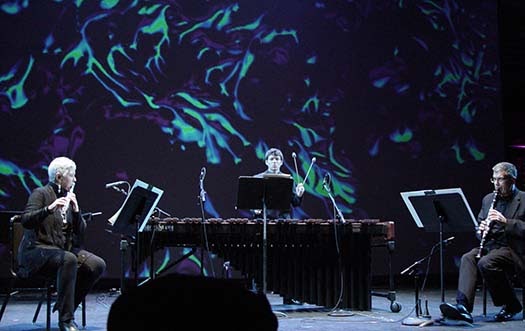 The evening continued with the longer, minimalist Sacrament by Mario Diaz de Leon with Robin McKee, flute, Jacob Nissly, percussion, and Jerome Simas, clarinet. Another highlight was a Vespers piece for solo violin and electronics by Mazzoli, prefacing a somnolent, atmospheric piece by John Luther Adams, The Light Within, and finally Arvo Part's Silentium from Tabula Rasa. 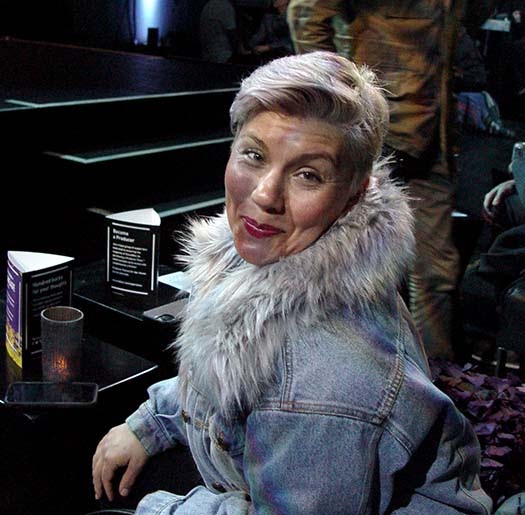 It's fun to join interesting younger people who are stepping out to a nightclub atmosphere rather than going to a stuffy classical music concert, but this may be my last SoundBox. The experimental excitement and genuine hipness of the first few years have mostly fled with higher ticket prices and a few too many audience members attending only because they have heard it's the hot, happening ticket in town. By the end of the evening, I felt more sleepy than spiritually refreshed. 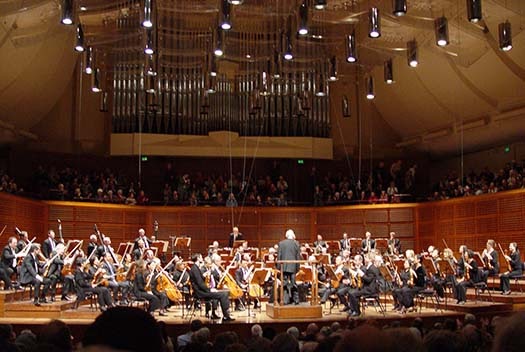 Two days later, at what I refer to as the old ladies' Sunday matinee, proved to be a holier experience. 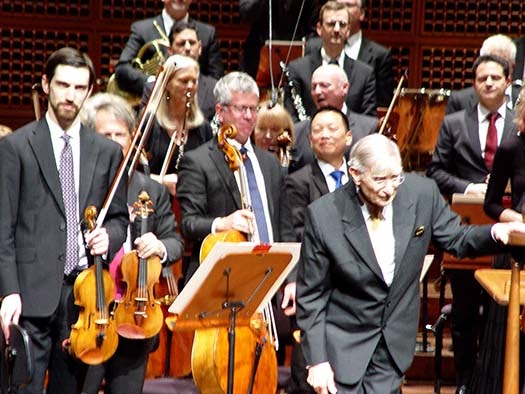 Herbert Blomstedt, the SF Symphony's Music Director from 1985-1995, had returned for his annual two-week stint heading the orchestra, conducting the most boring of classical music staples, Beethoven and Brahms, with the assistance of the new young assistant concertmaster Wyatt Underhill. 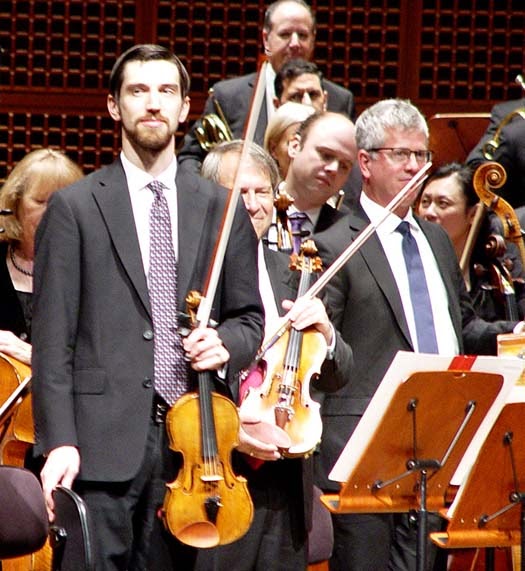 It was wonderful seeing Underhill getting a chance to be concertmaster in such bread-and-butter fare as the Beethoven Second Symphony and the Brahms Fourth Symphony because he radiates the same kind of joy in musicmaking as cellist Peter Wyrick at his side. The Beethoven was alive and continuously interesting (and this is not a composer I love at all), while the Brahms Fourth was the best live performance of that work I have ever heard. Blomstedt managed to draw out such a clean sound that it didn't feel like an interpretation so much as a conjuring of how exciting and moving the music sounded at its composition, as if all kinds of time and barnacles had been scraped off. 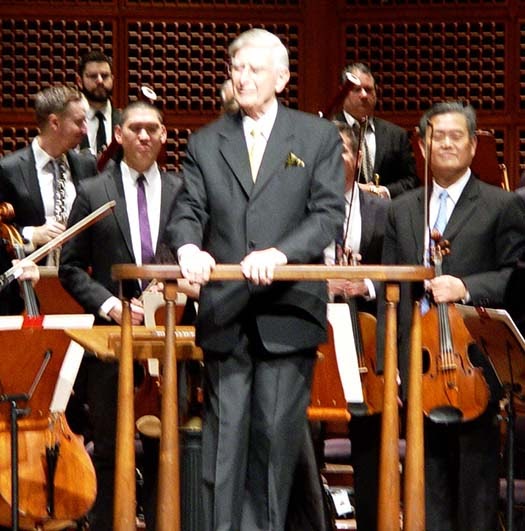 Blomstedt is 92 years old and becoming more masterful each year. A Wikipedia article notes, "A devout Seventh-day Adventist, Blomstedt does not rehearse on Friday nights or Saturdays, the Sabbath in Seventh-day Adventism. He does, however, conduct concerts, since he considers actual performances to be an expression of his religious devotion rather than work." Listening to this Brahms Fourth, I could see heaven.
Posted by Civic Center at 9:28 PM

Since no one else has provided the input yet, I can let you know that the clarinetist in the photograph is Jerome Simas (very busy having just completed a Left Coast Chamber Ensemble gig)!

Thanks, Steven. I'll put his name into the post now.

Wow!!! Great Content. Thanks for sharing such an informative content. By the way here is an offer going on flights from sfo to nyc , where you will get dirt cheap flights from san francisco to new york .
Thanks, Keep Posting :)