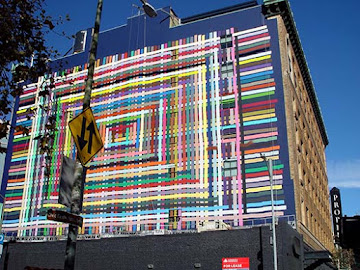 At one of the grittiest intersections in San Francisco, consisting of Market, Jones & McAllister, a thin, triangular office building was transformed into Hotel Shaw in 1927 (click here for an interesting history). As the neighborhood became sketchier from the 1960s on, the building went through a number of owners and names. Its last incarnation was the Renoir Hotel, which seemed to be a budget site for Euro tourists, but it has been reborn in the last couple of years as a luxury hipster establishment called Proper Hotel, complete with an instantly successful rooftop bar. The neighborhood is still a den of thieves and drug addicts acting out on the sidewalks, but the Proper Hotel seems to have dealt with that reality by being very secure and closed off architecturally from its ground-floor surroundings. 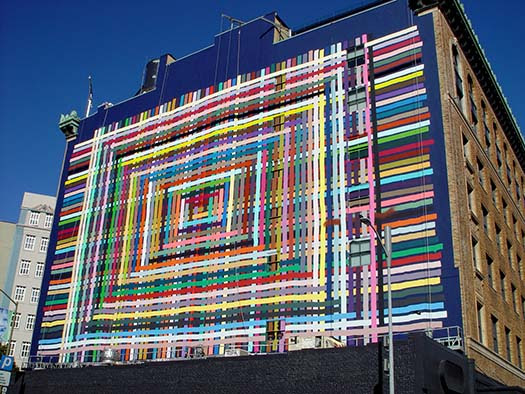 Whatever misgivings I might harbor about wealth slumming in squalor, the new mural going up on the backside of their building on 7th Street is a magnificent addition to the neighborhood. It made me smile while sad, which is a remarkable feat for public art.
Posted by Civic Center at 10:43 PM

no pictures on blog.

Me too - photos failing to load. Where do you keep them?

I think your photos are broken.
I feel similarly about the Proper... It is really a lovely hotel with great restaurants and decor but I can't help wondering how many people were displaced from their already precarious living situations to make room for it...

Hope the pictures are working now. And Rachel, it's not a new building, if you follow the history link, it actually dates from the 1920s so nobody was displaced, although there's a big yet... in that statement.

Jan, I'm loading them on to Google Photos, but it's a weird and unsatisfactory solution.

Thanks, Michael. The mural is gorgeous.
(and I guess I assumed that people had been living there even when it was a tourist hotel, which is why I thought that...)

Back in town and walking around again, I'm still happily surprised by our city every once in a while. As the city has become a different and essentially less interesting place, I've wondered if I want to finish my walking project -- and then I come across something that delights me. This is like that. (Tho I was out in District 4 today, and I wondered.:-)