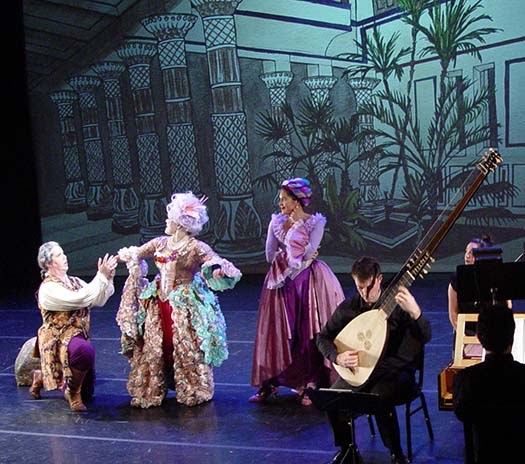 Ars Minerva presented its fifth annual opera production, rediscovered from the Venetian library vaults, and the troupe under founder Céline Ricci just keeps getting more accomplished each year. The 1680 Ermelinda, composed by Domenico Freschi with a libretto by Francesco Maria Piccioli, was originally presented as a lavish musical entertainment for a Polish prince at a country palazzo. 440 years later it was receiving its second set of performances at the tiny ODC Dance Theater in the Mission District of San Francisco in what felt like a feat of time travel. The piece is anchored by a love trio involving contralto Sara Couden as the nobleman Ormondo who spends much of the opera posing as the lower-born Clorindo, mezzo Kindra Scharich as an insanely determined suitor for Clorindo's love, and mezzo Nikola Printz as the title bored teenager who has been dragged to the provinces by her father to keep her safe from the sins of the city.

The entire cast was superb (from left to right): countertenor Justin Montigne as the overprotective father with a nasty streak; soprano Deborah Rosengaus as the noble Armidoro who is in love with Ermelinda and who has a vengeful streak himself; alto Sara Couden as Ermelinda's beloved who has followed her to the provinces in disguise; mezzo Nikola Printz as Ermelinda who convincingly transforms from a comic to a tragic character; the harpsichord continuo/conductor Jory Vinikour as himself; mezzo Kindra Scharich as Rosaura, who falls madly in love with Clorindo, who is in love with Ermelinda. This all sounds complicated but the clean staging by Ricci made it all clear. Elizabeth Flaherty in the robe was a charmingly bumbling supernumerary playing various roles with a switch of a costume moustache. 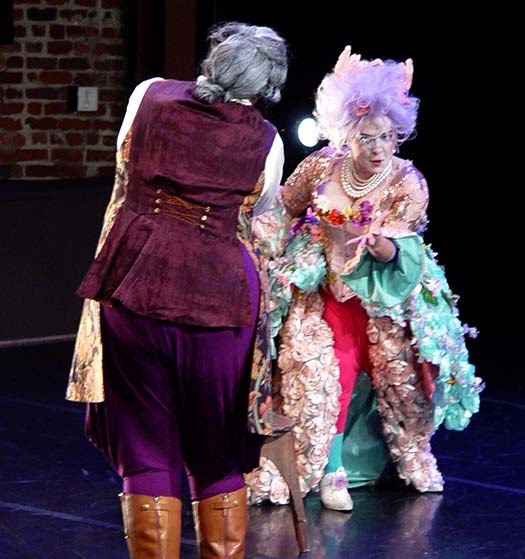 There were a few standouts in the cast for me. Sara Couden as Ormondo/Clorindo has a tall stature that makes her perfect for a trouser role. I have heard her in a few operas over the years with local companies, but this was the first time I fell in love with her gorgeous, bottomless alto voice. When things started looking dark, she sang a despairing aria translated as "What now?" which she sang so softly and emotively that it was genuinely heartbreaking. Mezzo Kindra Scharich as the rich, spoiled Rosaura was very funny in in her obsessive love scheming, and she also wore the most outrageous costume of the evening which she worked like a pro. She was also in great voice on the Saturday evening I attended. 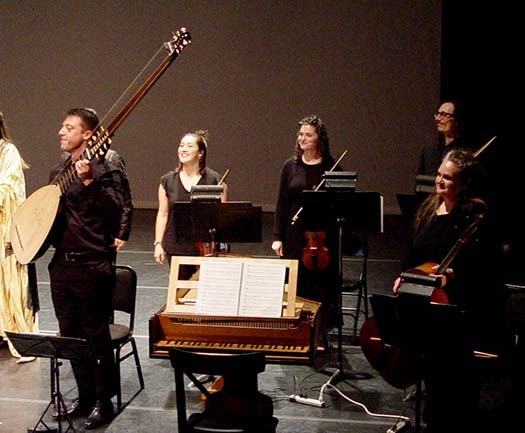 Renaissance Italy is where opera was born in the late 17th century, and the style is very different from the long, langorous Baroque opera which followed. The arias are short, exquisite tunes that are not repeated and the recitatives sung over a combination of harpsichord and theorbo are snappy and expressive. The small orchestra, which was onstage in this production, felt very much part of the drama and they were as fun to watch as the vocal performers. Conductor/harpsichordist Jory Vinikour is a pretty big deal on the global Early Music scene, so his recent appointment as Ars Minerva's musical director is good news. He led a lively ensemble consisting of Cynthia Black, first violin; Laura Rubinstein-Salzedo, second violin; Aaron Westman, viola; Gretchen Claassen, cello; and the welcome return after a year's sabbatical of Adam Cockerham, theorbo. 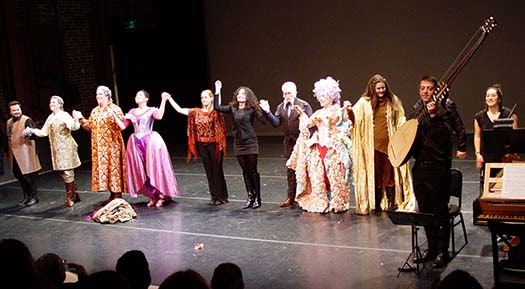 The production was spare with elements of ornateness that worked well, highlighted by Matthew Nash's costumes and evocative, hand-drawn wall projections that effectively set each scene by Entropy, a young German artist. Céline Ricci directed the contrasting comic and tragic scenes well, and I only wish she would stage one of these operas in a real Venetian palace before they are all underwater. I'd buy an airplane ticket in a second.
Civic Center at 1:15 PM
Share